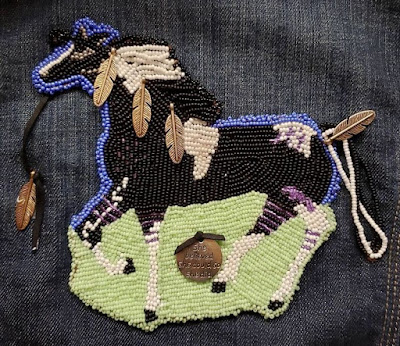 Paty Jager is the award-winning author of the Shandra Higheagle and Gabriel Hawke Mystery series. All her work has Western or Native American elements in them along with hints of humor and engaging characters.Paty and her husband raise alfalfa hay in rural eastern Oregon. Riding horses and battling rattlesnakes, she not only writes the western lifestyle, she lives it. Learn more about Paty and her books at her website.

My favorite part of writing a book is getting to research topics that I’m interested in, and sometimes I learn new things that I find interesting.  The newest release in my Shandra Higheagle Mystery series is set at a powwow.

I attended a powwow about six years ago. It was a kaleidoscope of color, interesting music, and unique vendors. The atmosphere is one of rejoicing and roots. While this book is set at a different powwow. and I had help from my friend Carmen Peone, who lives on the reservation where I set my story. I hope the reader gets a good sense of what the event is all about.

While doing my research, from both my attending a powwow and gathering information about the one where my story is set, I was intrigued by the various vendors who set up booths and sell either products they themselves make or products to help make regalia (the clothing worn during the powwow dancing), jewelry, leather, feathers, sage, beads, and other items. There are also t-shirt booths and kitsch items.

From the moment this story came to me, I wanted the victim to be a woman who did beadwork. I wanted her strangled with one of her own necklaces. Not because the woman deserved it, but because it was a symbol for the person who did the killing.

I’ve done very little crafting with beads and found it interesting to watch beading videos, look up beading terms, and even the types of beads used by Native Americans.

Before glass and metal beads were introduced from Europe, beads were hand carved from bone, shell, copper, and stone. These days the tiny glass seed beads are what are used in the beadwork that can at times tell a story.

This beadwork shown above is by my friend Carmen Peone to depict a horse in her True to Heart Trilogy.

Jingle cones are metal cones that are sewn on dresses in a pattern so they will knock together as the Jingle Dancer moves. This is a distinctive noise made by the Jingle Dancer. The sound is like sleigh bells.

The first legend of the flute as told by deceased Lakota Elder, Phillip Brown Bear (Phil Lane) can be found on the Wind Dancer Flutes website. This is a website where you can purchase handmade flutes or CDs by Roger McGee. Roger’s CDs are part of the music I listen to when I write. The photo is of one of his flutes. 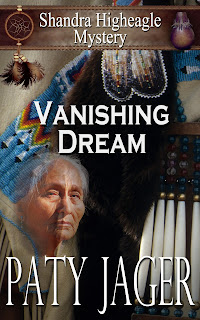 Shandra Higheagle Greer’s deceased Nez Perce grandmother appears in her dream, dancing at a powwow. Since Grandmother only appears when there is trouble, Shandra believes, she, Ryan, and the twins should attend the yearly Powwow at the Colville Reservation.

While out for a walk the first night, Shandra sees someone lurking in the dark between the vendor tents. The following morning a vendor is discovered strangled with her own beads.

When members of Shandra’s family are attacked, she finds it hard to stay out of the investigation. Following a suspect, she’s captured. No one knows her whereabouts. Trying to call upon her grandmother to come to her aid, Shandra realizes the dreams are vanishing and fears so could her life.

Thank you for having me on your blog today!