Today’s Book Club Friday guest author is M.E. Kemp who writes an historical mystery series with two nosy Puritans as detectives.  Her latest book, DEATH OF A DANCING MASTER, will come out on November 20th from L&L Dreamspell, who have also published some of her short stories.  M.E.’s New England roots are strong, going back to 1636 Salem. In 1713 her ancestors settled her home town of Oxford, MA, where she grew up.  She lives in Saratoga Springs, NY with husband Jack and two kitties, Boris and Natasha, who live up to their names.  You can read more about M.E. at her website.

M.E. is offering a copy of DEATH OF A DANCING MASTER to one lucky reader who posts a comment to the blog this week. The book will be shipped in a few weeks, once she receives her author copies. -- AP
WHY DO WE LOVE THE BAD BOYS? 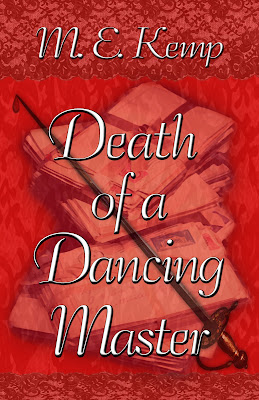 From Heathcliff and Mister Rochester to Fonzie and Dexter, we love the bad boys!  We even root for stuck-up Mister Darcy over the congenial bird-witted Mister Bingley.  Why is that, I wonder?  Mister Darcy is at least  handsome, but poor Mister Rochester of Jane Eyre fame is described as dark and unprepossessing and Heathcliff of Wuthering Heights is a real brute.  He's described as dark and ugly as a gypsy.  (Note: this is a 19th c. concept -- I think the Romany are quite handsome as a people.)  Even in Georgette Heyer's Regency novels her best heroes are the dark rakes, like Lord Demeril in Heyer's Vanessa.  He's your typical bad boy -- a tall, dark, haggard-looking womanizer and gambler.  Yet our fair heroine loves him.  And is there a female who grew  up watching the television series Happy Days who didn't have a crush on Fonzie in his black leather jacket?  Even Richie had a crush on the Fonze.  Too bad the writers never pursued that line....
A mid-twentieth century critic wrote a best selling book, Love and Death in the American Novel, based on the premise that the dark, seductive woman was always the most interesting character as opposed to the blond twits who fainted at the first moment of crisis.  Fiedler used Cora vs. Alice from Last of the Mohicans to illustrate his theory.  (He also wrote that the greatest love scene in American Literature takes place in a boarding house between two sailors in Moby Dick. Queequeg is certainly dark, being a native of the Fiji Islands, although he's not a Bad Boy.  He's kind and caring and saves the life of Ishmael.)  So maybe Fiedler's theory holds true for men as well.
In a more contemporary tone, just think of bad boy Tom Ripley.  (Matt Damon in the movie, based on the novel by Patricia Highsmith.)  Ripley is a charming rascal even if he is a murderer.  Then there's television's Tony Soprano.  Tony's a Bad Boy for sure, but who doesn't sympathize with him for his spoiled-brat kids, his nagging wife and his crazy buddy Pauly Walnuts, who even his fellow crew members call a psycho?  That doesn't even include his murderous mother.  Is it any wonder the guy is seeing a psychiatrist?
Maybe it's the element of danger these bad boys bring with them.  Maybe it's the desire to save them -- the love of a good woman and all that.  Maybe the bad boys are just the more interesting characters and it's writers over the years who's fault it is that we are drawn to them.  Even the great poet Milton in his epic Paradise Lost just couldn't help making Satan the strongest character as the Fallen Angel.  What does poor Gabriel have to offer besides his horn?  "The Devil made me do it."
Whatever the reason, we love the Bad Boys.  Let's just keep them at a safe distance -- in books, on television or in the movies.  Bad Boys in real life are not so charming.
Thanks so much, M.E.! Bad boys certainly are intriguing. What do you think, readers? Do you go for the bad boy or the nice guy? Post a comment to enter the drawing to win a copy of M.E.’s DEATH OF A DANCING MASTER. And don’t forget to stop back tomorrow to see if you’re the lucky winner. -- AP
Posted by ANASTASIA POLLACK at Friday, November 19, 2010

I've always gone for the nice guys - but can certainly see the attraction of the bad boys!

Please enter me in your drawing. Some of my ancestors were Puritans and I would love to try this series.

M.E. Kemp:
Well, allow me to answer from the other side: as a guy why am I drawn to 'bad girls' (if, indeed, I am)?
I think the appeal is excitement, adventure, the 'unknown'. Of course, passion, but even if no relationship is ever, uh, culminated ... there's still attraction to the 'wildness' of a free-spirited female who doesn't play by the regular rules.
Some of these 'bad girls' might give off an 'energy' which is contagious. And some have a carnality (whether literal, as in sexual ... or figurative, as in 'earthy') which can be magnetic.
So, yeah, we want to get closer ... feel the heat. We want to touch, but hope we don't get burned. Or, if burned, that it won't leave scars.
I suspect that's the way it is with a typical -- if there is such a creature as a typical woman -- woman's attraction to 'bad boys."

I've always liked the 'nice' boys, but not too nice. They need just a touch of wicked to keep from being dull.

Marilyn is having some problems posting comments, so I'm acting as her go-between. Here are her replies:

Anonymous - you'll never believe this, Anonymous, but I'm totally in love with a Swan! I just saw Matthew Bourne's "Swan Lake" with the all male swans and the Swan King was just so virile.... Talk about your bad boys, these swans were deadly. M. E. Kemp

Carol - I hope you enjoy my series -- I try to overcome the stereotype of the Puritan to reveal the human beings they were, and fun was a part of it! M. E. Kemp

Jeff: I hope you've described Hetty to a tee. She is as free a spirit as you can get -- she completely ran away from me and is her own woman. Of course, she's a widow which gives her much more freedom for her period. That must be why she refuses to marry again. M.E. Kemp

Shirley - watch out the good guys, Shirl -- at least with a bad boy you know what to expect. M. E. Kemp

I agree that bad boys make for much more interesting characters. If the heroine has to choose between two nice guys, where's the fun in that?
Although, I have to say that Heathcliff is a little too bad for my taste. I recently reread that book and he is one mean bully- heartbroken or not.
Still, I like my heroes with a little edge to them. As Mae West said: When I'm good, I'm good, but when I'm bad, I'm better.
Thanks for the post. Puritan sister sleuths sound wonderful. I'll have to check out the series.

Shirley, I feel, is closest: "They need just a touch of wicked to keep from being dull." That is, I believe, the underlying factor: the villain (whatever the depth of villainy) is always more interesting, simply because (s)he acts, while the hero(ine) reacts. No villain, no hero. Thus, with the villain, one has the chance of something's happening; with the hero, it's likely always to be same-old same-old.
--Mario