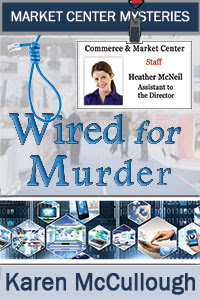 Karen McCullough is the author of a dozen published mystery, romantic suspense, and fantasy novels and novellas. She has won numerous awards, including an Eppie Award for fantasy, and has also been a four-time Eppie finalist, and a finalist in the Daphne, Prism, Dream Realm, Rising Star, Lories, Scarlett Letter, and Vixen Awards contests. Her short fiction has appeared in several anthologies and numerous small press publications. Learn more about Karen and her books at her website and blog.

My Failure: Setting Realistic Career Goals (or I’m Still Not a Bestseller!)

Thirty years ago when I started writing in a serious way, intending to sell my ramblings, I was young enough and naïve enough to think that if I worked hard and strived to get better at the writing that in five to ten years I could sell a novel or three or six to a major publisher and see it become a bestseller.

In fact, I did sell the sixth complete novel I’d written to Avalon Books in 1989. And I sold three more to them before my editor left and the new editor wasn’t as happy with my writing. But I was ready to take on longer, deeper books than Avalon would publish, so I didn’t feel it was a setback so much as a new opportunity.

I’d planned to write a few more romantic suspense novels and was pretty sure that I’d be able to sell them to a New York publisher. After a while I’d make it to some bestseller list and I’d be set. At the time that was my main goal.

If I’d only known much sooner how foolish that was. Too many things are out of my control and too much luck is involved at every step. Your editor/agent doesn’t connect with the latest thing you’ve written.  As already mentioned, editors change, and they don’t all have the same taste. Publishers consolidate; they kill lines; they even go out of business. The things you like to write go out of fashion and publishers won’t buy it any more. I’ve had all of those things happen to me.

That’s my failure, and I’d be lying if I said it didn’t sometimes sting.  I’ve had books published. I’ve gotten good reviews. I’ve won a fair number of awards and contests. But I’ve never gotten a five-figure advance for a book, and I’ve never made it to any best-seller list.

So, I’ve come to realize that the only thing I can really control is my own work.  Now my goals are centered on things that I can actually make happen. How many pages I’ll try to write in the next period of time; how many submissions I’ll send out; the schedule for releasing my backlist; and doing promo for my books.

Wired for Murder
Most of the time, Heather McNeil loves her job as assistant to the director of the Washington DC Market Show Center. Because she’s a good listener and even better at solving problems, her boss assigns her to handle a lot of the day to day issues that arise during the shows, exhibits, and conferences being held there.  When Heather becomes an unwilling audience to murder and later finds the body, she’s willing to let the police take care of it. But she soon learns more than she wanted to know about the victim and all the people who really didn’t like him very much.