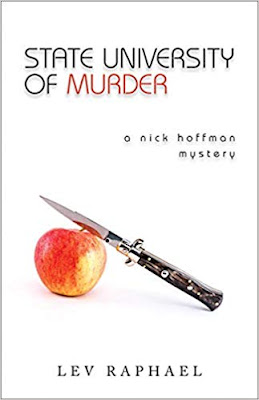 Lev Raphael is the author of twenty-six books in a dozen different genres. His work has been translated into fifteen languages. He teaches writing workshops at writewithoutborders.com. Today Lev joins us to discuss the real-life events that inspired him to write his most recent mystery. Learn more about Lev at his website and blog.

Teaching at a Toxic University
Back in 2011, the chair of the English Department at Michigan State University emailed to ask if I’d consider teaching there. His email was serendipitous. Less than a week before, I’d returned from a book tour in Germany where some of my venues were classrooms and I came home missing the interaction with students I’d had years ago before leaving academia to write full time.

As the chair pointed out when we met for coffee, I had published more books than the entire creative writing faculty put together, so he thought the match was ideal. I was happy to return to the classroom, and not only taught fiction and creative nonfiction, but literature courses packed with books I loved. Better still, I worked independently with talented writing students doing a senior thesis and got to pass on the kind of mentoring I received in college.

My office mate, a recent Ph.D., was friendly and hardworking, and chatting with her about books and pedagogy was always rewarding. Then one day, she walked in looking very upset and when I asked what was wrong, she told me about a frightening incident that had just happened. Her ex-boyfriend had burst into her apartment, knocking the door off its hinges, and roughed up her current boyfriend while she was locked in the bathroom calling 911. Apparently her ex- had been stalking her up to this point.

Not long afterwards, one of my best writing students FB messaged me that she was being stalked. I made sure she was safe and urged her to call the campus police. As she told me more about what was going on, it turned out the guy was a graduate student instructor who had taught one of her classes and sounded very much like the man who'd attacked my officemate's friend. A few questions later, it was clear this was the same person, and I put her in touch with my officemate for support.

I wasn't thinking of fiction then, I was worried about her safety, the safety of my officemate, and even my own. What if the stalker came to the office we shared looking for her and attacked me, too, for whatever reason? He sounded violent and unstable—anything was possible. I got a description so that I could be on guard, though to be honest, defending myself in a tiny office the size of a walk-in closet would have been close to impossible.

And then I watched over many months as both women were badly treated by the MSU office tasked to handle assaults, and let down by the legal system as well. My officemate eventually gave up academia, and my student left MSU in senior year before getting her degree because she didn't feel safe there anymore. Personal Protection Orders don’t mean much if someone is willing to violate them, or is stalking you via social media.

Shock doesn't begin to describe what I felt as their cases started being reported on in print and on air. They seemed more terrible with wider dissemination. And their stories sadly aligned with what I read about other campuses in the U.S. where people who should have helped were not responding swiftly or humanely in similar situations. A larger question that emerged was a depressing portrait of arrogant or out-of-touch administrators at all levels, who either ignored what was going on or responded inadequately.

That kind of malfeasance and mendacity fuel the plot of my 26th book State University of Murder. It fields the same sleuth as in eight previous mysteries, English professor Nick Hoffman, but involves him more deeply than ever before with administrators who care more about their own position than the needs of the students and faculty they’re supposed to serve. I drew on stories people at other universities had told me and on newspaper reports from across the country.

State University of Murder isn’t a transcription of actual events, but it’s certainly inspired by them, and so is the character I created who’s coping with sexual assault. She’s a tenured professor, because anyone is vulnerable to exploitation, harassment, mistreatment--and worse. It’s all about power, and power plays out in unique but identifiable ways on college campuses in every state.

Michigan State University has made the news recently for much more stunning tales of abuse and what feels like corruption, but the two stories I heard from the victims needed to be honored just the same. I was already disillusioned by how I saw people treated at MSU, and what happened to my officemate and my student made the idea of continuing to teach there less and less tenable. Setting up my own website has been the perfect antidote.

Still reeling from having escaped a mass shooting on campus, English professor Nick Hoffman finds himself on the receiving end of confessions by one colleague after another. All of them have good reason to hate the new department chair, Dr. Napoleon Padovani, who throws his weight around capriciously and cruelly. Resentment mounts on campus -- with an inevitably fatal result. Chaos and confusion reign among the faculty, which then turns on its own. Can Nick and his spouse Stefan restore order and save the day? Raphael has described the university as "a unique combination of the vanity of professional sports, the hypocrisy of politics, the cruelty of big business, with a touch of organized crime thrown in."

Lev . . . It seems like some things never change. Your tale of violence and fear could have been written by either one of us thirty years ago and only the names would be different. Living in fear, always vigilant, is no way to live.

Knowing those two women as well as I did made the nightmare so much more immediate. Both wisely left MSU. Their stories can likely be echoed across the US.