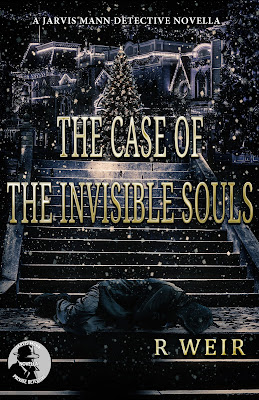 Award-winning author R Weir lives in Colorado where he enjoys the outdoors with his wife, daughter, and dog. Both his Divine Devils and Jarvis Mann Private Eye series explore the gritty underworld of crime, suspense, and mystery where no evil stands a chance against his written word! Today he allows us to eavesdrop on a conversation between the main characters from his two series. Learn more about him and his books at his website.

A Divine Chat Over a Beer

I was wiping down the counter at my Denver bar on this quiet middle of the week, hoping for more customers, when low and behold I got my wish. Walking in was a stout good-looking man dressed casually, taking a seat on the other side of the counter.

“A beer please…whatever you have on tap,” he said with a tired deep tone.

I grabbed a frosty mug from the cooler and filled it to the brim, sitting the frothy liquid before him. He took a long sip, the foam sticking to the upper part of his wrap around goatee at first, before dissipating. The bald dark-skinned man releasing a tension-filled sigh confirming he enjoyed the taste.

“A tough day?” I asked while tossing a bowl of pretzels within his reach.

“You have no idea,” he replied after another long drink.

I’d heard many fascinating stories in my recent years behind the bar, and I was interested in his. “Bartenders are great listeners.”

The man grabbed a couple of pretzels, swallowing them. “I was chasing down a criminal who had injured a woman during a burglary. Damned if I just missed grabbing him.”

“Are you a cop?” I inquired, curious about the man’s profession.

“A former US Marshal…now working privately.”

“Former, you say. Any particular reason you no longer work for the Feds?”

Wrinkles formed on his forehead, anger in his tone. “A kid I was guarding was murdered. His father was a US Senator, and I was blamed.” He took another drink of his beer, the liquid level below half. “Even though he was killed by an assassin from long range.”

“That sucks. I’ve learned the hard way when working cases that those in power often step on those who aren’t.”

The man’s eyes locked onto mine. “You work in the business?”

“Private eye, at one time. I retired—mostly—to own and run this place.” I held up my hand and waved all around me. “Thanks to two bullets, I found this life to be easier on my soul and body. But occasionally I still dabble in the business.”

The man nodded. “I understand. I’d love to find a quieter life, but I can’t stop until I track down the killer. In the meantime, I chase down bad guys for our clients. It’s rough sometimes but I have team members to help.”

Reaching across, the man shook my hand with a grip of steel. “I’m Hunter Divine, now working freelance as a troubleshooter.” Hunter smiled and reached into his pocket, handing me a card. “If you’re ever interested in getting back into the game, I’m always looking for good help.”

I looked down at the card reading it, his business name and logo revealing. Leading me to wonder what the hell this man delved into when it came to his work. It appeared he was a troubleshooter who lived on the edge.

“The Divine Devils,” I stated with surprise. “Is that some type of inside joke?”

Hunter finished his beer. “Not at all. It’s what we call ourselves. We’re willing to move heaven and hell to get the job done.”

I glanced down at the card again and tucked it in my back pocket for future reference. With a name like The Divine Devils, I didn’t imagine many wanted to mess with this man and his team. I grabbed his empty mug and filled it again, then got one of my own.

“This one is on the house,” I said, holding up my beer. “Here’s to you and your Divine Devils and hoping I never get on your bad side!”

“Maybe I should tell you the story about my case of The Front Range Butcher,” I declared, a cold shiver running down my spine at the gruesome memory.

“That was you?” Hunter replied, his interest piqued. “Spill the beans. I’d love to hear everything about that sick serial killer.”

A story I happily shared, the two of us chatting the evening away, bonding over the challenging and dangerous cases we’d both survived.

The Case of the Invisible Souls

With Christmas a few weeks away…Happy these last few months had been quiet, Private Detective Jarvis Mann decides to take on an interesting case. A homeless veteran knocks on his door with a story. Several of his homeless companions have been bribed, then taxied away never to return.

Taking pause to the man’s story at first, Jarvis digs deeper, learning of plans to clear out the homeless. When the man is attacked and seriously injured, Jarvis goes undercover, learning more about life on the streets than he ever knew, becoming one of the Invisible Souls in search of an answer.

Thanks, Lois for having me on your blog. If anyone has questions about any of my books don't hesitate to ask. Happy Holidays to everyone!!