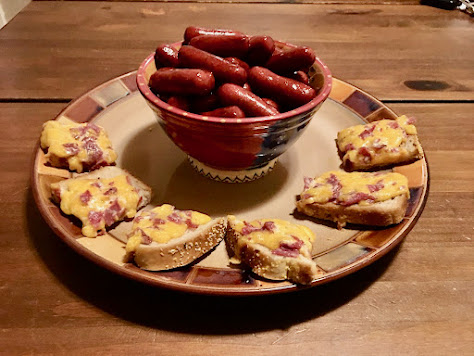 Jacqueline Vick writes the Frankie Chandler Pet Psychic mystery series about a woman who, after faking her psychic abilities for years, discovers animals can communicate with her. Her second series, the Harlow Brothers mysteries, features a former college linebacker turned etiquette author and his secretary brother. Her books are known for satirical humor and engaging characters who are desperate to keep their secrets. Learn more about Jackie and her books at her website.

Years ago, when my husband and I moved from Illinois to Southern California, we knew our lives would change. New jobs. New home. New friends. Until our first holiday, we didn’t understand the subtler effects of living far from family.

In Illinois, seasons clearly mark the year’s passing. It’s difficult to explain how fall foliage, snow-covered lawns, and the first sign of tulips can help organize the year along with the accompanying holiday. Easter in Spring. Independence Day in Summer. Thanksgiving in Fall. Christmas in Winter.

Missed family gatherings are especially noticeable on Christmas. Growing up, our family traditions included Midnight Mass with the opening of the gifts afterward, accompanied, of course, by delicious treats.

Though I no longer make it to midnight on Christmas Eve, I do carry on the tradition of the treats. Every time I make them, I’m reminded of childhood and the warmth of family gathered snugly inside while it snowed outside. It helps that the recipes are incredibly simple.

We called the first one Holiday Sandwiches. We would search the stores for cocktail rye. If you can find it, you are a better woman than I am. Long ago, I settled for rye sandwich bread. (I prefer Jewish Rye, but feel free to use your favorite, though it will affect the final taste.) You can cut it beforehand and make the sandwiches individually. If you’re in a hurry, add the topping to each slice, cook whole, and cut later.

The spread is simply packages of Buddig’s Beef, grated sharp cheddar cheese, chopped green onions, and sliced black olives. Mayonnaise holds it all together. And here is where you discover how versatile this recipe is.

Hate onions? Leave them out. Hate olives? Okay. We’ll discuss that later, but again, you can skip them. I always plop one on top of a few sandwiches since my husband doesn’t like them. I’ve never tried green olives because they might make the sandwich too salty.

You can also go crazy with the combinations. Swiss and ham. Corned beef and Swiss. Pepperoni and provolone. There is no limit!

The second treat is even easier. You’ll laugh at how simple it is, yet this is my most requested recipe from potlucks.

Just put equal amounts of jelly and mustard in a pot on the stove. I say jelly because jam and preserves have bits of fruit and, possibly, seeds. Heat until combined, and then add cocktail weanies. Cook on low until they’re heated through. That’s it. Boysenberry is the preferred jam, but it’s usually hiding out with the cocktail rye. I’ve used strawberry, grape, and seedless raspberry to name a few, and it’s always turned out great.

It’s surprising how the simple act of keeping up this tradition brings me comfort when family are far away. Another tradition I have is reading Christmas mysteries. Drop Dead Ornaments, one of Lois Winston’s books, comes to mind. Cozy and cozy-adjacent mysteries are populated by families and friends, and they go a long way toward making me feel the holiday spirit again.

2 packages of Buddig Beef, the 2 oz size, diced (Tip: My parents used to let us help by handing us a pair of kitchen shears to cut up the beef.)

Rye bread cut into six squares (before or after you cook)

Mix the first four ingredients in a bowl. Add enough mayonnaise to hold them together.

Spread the topping on the bread. By spread, I mean plop it on with a spoon and push it around with the back of the spoon. The mix is thick.

Place on ungreased cookie sheet. Bake at 350 degrees until the cheese is melted and the bread crispy, about 10 minutes.

1 package of cocktail weanies, any variety

Mix equal amounts of jelly and mustard in a pot on the stove. Heat on medium, stirring often until jelly melts and combines with mustard. Taste to determine if you prefer it with more sweet or sour and adjust accordingly.

Add 1 package of cocktail weanies. I dump the juice in too for extra flavor, but you can drain them if you like. Cook on low heat, stirring occasionally until heated through. 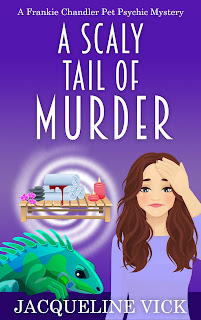 A Scaly Tail of Murder

A new fiancé, an old boyfriend, and a murder that will change everything.

Frankie Chandler is finally at peace with her life. She’s engaged to Detective Martin Bowers, her pet psychic business is booming, and she’s overcome the emotional residue of a past relationship that destroyed her self-respect.

Just when everything’s going swell, trouble strolls through her front door. Jeffrey Ross, the ex-boyfriend who betrayed her, needs Frankie’s help. To get rid of him, she agrees to retrieve the keys he left with yet another hostile ex-girlfriend, a masseuse. Unfortunately, when Frankie shows up early at Friendly Fingers Spa, Jeff’s latest fling is face down in the new Jacuzzi. Murdered right in front of her Fiji Crested iguana.

The reptile refuses to tell what he knows, and when Frankie’s involuntary entanglement in the investigation threatens to ruin Bowers’ chances for promotion, she takes steps. After calling an uneasy truce with Jeff, the two form a crime-solving team that will either solve the mystery or bring an end to everything she’s worked for.

Thank you so much for having me on, Lois. My recipes were too easy for Cloris, but she was nice enough not to say so.

Cloris might not bother with easy recipes, Jackie, but I love them. Thanks for joining us today.