Dear Readers, I regret to inform you that our much anticipated visit from the great Robin Spencer had been cancelled due to her unexpected death this spring. The author of eighty-seven murder mysteries, most of them best sellers, plays, and movies, Robin was the undisputed American Queen of Mystery. She will be greatly missed all over the world by her fans. However, her assistant, Archie Monday, was kind enough to visit to tell us about what has been happening at Robin’s estate on the shores of Deep Creek Lake in Maryland since her long lost son Mac Faraday moved in.
You can read more about the goings-on at Deep Creek Lake from author Lauren Carr at her website http://laurencarr.webs.com/ and blog http://writerlaurencarr.blogspot.com/. Lauren is also offering a copy of It’s Murder, My Son to one lucky reader who posts a comment to Killer Crafts & Crafty Killers this week. -- AP 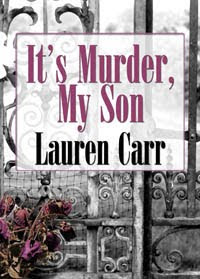 Thank you, Anastasia, for letting me fill Robin’s very big shoes--and I don’t mean that literally! But, after working as her editor and research assistant for over a decade, I knew that Robin wouldn’t have it any other way. Robin was like a mother to me and she’d want her fans to know what has been going on at Spencer Manor.
Most of you are probably surprised to find out that Robin Spencer even had a son. He was the Spencer family’s deep dark secret. While Robin was in high school, she and her first love had a baby together. Her folks forced her to put the baby up for adoption and shipped her off to college. Meanwhile, her first love, Patrick O’Callaghan, got married and went on to become Spencer’s police chief. I only found out about it a few years ago when Robin asked me to find her son for her.
I found him in less than three weeks. If there’s a record of something anywhere in cyberspace, I’ll find it. That’s what I do.
Would you believe it? The baby of the world’s most famous murder mystery writer had grown up to become a top-notch homicide detective. It has to be in the genes.
I don’t think any of Robin Spencer’s fans were as surprised to find out that she had a baby out of wedlock as Mac Faraday.
After twenty years of marriage, Mac’s wife had left him for an assistant district attorney who used his influence to get Mac taken to the cleaners in his divorced. She got everything! So lawyers were not Mac’s favorite people.
Robin’s lawyer was finally able to catch up with Mac on the day his divorce became final to inform him that he had inherited an estate worth two-hundred-and seventy million dollars, give or take a million. That includes Spencer Manor here on the Point on Deep Creek Lake. But Robin had stipulated that I get to continue living in the guest house on her estate as long as I want. I guess you might say I came with the house.
His ex-wife’s loss is my gain. (Oh! Did I really say that?)
Mac is still trying to settle into life at Spencer Manor.  I could tell the first day that he wasn’t going to be your average millionaire playboy rubbing elbows on the golf course at the Spencer Inn. For example, he’s been trying to hire a housekeeper and cook, but so far he’s had no luck. He had one likely candidate, but she ran screaming from the house when Gnarly, Robin’s German shepherd, dragged a dismembered head with a bullet hole in it into the living room.
Spencer’s police chief, an idiot appointed by the town council after Pat O’Callaghan died, assumed it belonged to Katrina Singleton’s killer and closed her case as a murder-suicide.
Well, having investigated well over a hundred murder cases during his career as a homicide detective, Mac was shocked to see a case closed so fast without any investigation. And when the police chief got snooty after Officer David O’Callaghan, Mac’s half-brother, pointed out evidence that didn’t fit with a murder-suicide—Well, the game got afoot really fast!
Who’s Katrina Singleton? Katrina was our next door neighbor. She was found in the family room with her throat crushed the day after the Valentine’s Day blizzard.
No one could understand Katrina’s murder. Her first husband had been killed less than two years before she was murdered. He had been attacked and killed up at Abigail’s Rock. Katrina swore that the killer was a disgruntled client of hers from Washington, but he had an alibi. Months turned into years and Katrina said that her stalker was still after her, but no one could ever catch him.
Then, the blizzard hit Deep Creek Lake on Valentine’s Day. Katrina was dead and Gnarly, her German shepherd, almost died trying to protect her.
Robin saved Gnarly and adopted him. Mac and Robin’s dog got off to a rocky start when Gnarly tried to kill Mac when they first met, but they get along okay now, as long as Mac doesn’t try to sit in Gnarly’s love seat.
Well, I’m running out of time, and I would love to tell you how, with the help of Robin’s journal, this retired cop put all his detective skills to work to pick up where the local police had left off to follow the clues to Katrina’s killer.  But I guess you’re going to have to find that out for yourself. Order your copy of It’s Murder, My Son by author Lauren Carr today.

So sad to hear of Robin Spencer's passing. She had found a devoted and talented friend in you, especially for adopting Gnarly. You are a good soul and from what I can tell, a good sleuth storyteller. Good luck settling the estate and the state of affairs in Deep Creek Lake!

So sad and today's Friday the 13th too. Thanks for sharing your fabulous and engrossing story. Any way to meet Gnarly? Sounds like someone I can be friends with.

I was intrigued by your post, so I went to Amazon and bought - "A Small Case of Murder." I know, I know, but I'm one of those who have to start with the first book even if it is not the same series. I'm looking forward to reading it.

Wow! What a great blog article and I am so eager to add this author to my TBR list. I'll have to start with the first one, too. Drat, there goes my grocery money to Amazon--again. Well, I need to lose a few--quite a few--pounds anyway. Please enter me in the drawing.

I didn't know Robin, but sorry to hear she passed. I look forward to meeting both Gnarly and Mac as well as getting to know some of the other occupants of Deep Creek Lake!

Thanks for stopping by Vikki, Kallilee, Becke, Janet, Caroline, and J Hali! This does sound like a great book, doesn't it? And who needs to eat when there are books to buy and read? Oh...wait...for a moment I forgot about my mountain of debt and those two growing teenagers who never stop eating. Oh well....

What fun! Looking forward to this series.

This is great! You are all a great group! I can't wait to find out who wins the free copy of It's Murder, My Son. It was a lot of fun wrting. I hope those of you who have ordered books from my previous series enjoy reading about Joshua Thornton and his adventures.