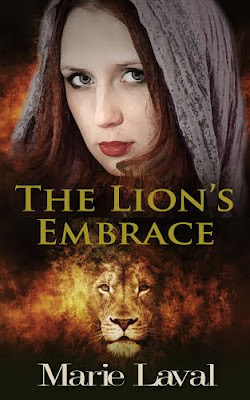 Originally from Lyon, France, historical and contemporary romance author Marie Laval now lives in Lancashire, England where she teaches French. Today Marie joins us to talk about titles. Learn more about her and her books at her website.

A lot of Sense and Some Sensibility or What I Should Have Done to Choose the Titles of my Novels!

There are many great articles dedicated to choosing titles of novels, but I must confess I hadn't read any of them before naming any of my three historical romances. The titles for Angel Heart and The Lion's Embrace popped into my mind in the early stages of researching the stories. I liked Angel Heart because it was catchy and related both to the name of my heroine and to the plot. The Lion's Embrace reminded me of the main character—the hero this time—and the North African setting. As for Dancing for the Devil, my third historical romance, to be published in three parts later this autumn, I had set my heart on it even before working out the details of the plot.

Things didn't quite go so smoothly for A Spell in Provence, my contemporary romantic suspense, which was released in January. The novel's original title was The Lady of Bellefontaine (Bellefontaine is the farmhouse my heroine has renovated and is opening up as a guesthouse), but a few weeks before publication my editor suggested that I change it because it sounded too much like a historical romance. Even though I had never thought about it, I immediately saw that she had a valid point. It took me a few days of hard thinking to come up with the new title, which I loved a thousand times better!
The process made me realize that I should have taken more time over my previous titles and experimented with different ideas. First and foremost, I should have 'Googled' them to make sure they didn't already exist or weren't too similar to others. This makes so much sense I can't believe I didn't think of it. Secondly, I should perhaps have waited until I had finished writing the story before deciding on the title, because the original title may not reflect the plot, characters, or style of the final manuscript and may therefore confuse potential readers. This was something else I didn't do, but then again it might be too much like leaving the choice of a baby's name until after the birth and I'm not sure I could do that.

Of course, there are other factors to consider when choosing a title. For example, should you go for an obvious title that reflects the genre, style and content of the novel so that readers know exactly what they are buying, or choose a more intriguing title, one with different layers of meaning?

Many romance novels are often easily identifiable from their title. Anything with the words 'heart', 'passion', 'temptation', 'wedding' and of course 'love' points to a romance. Add an aristocratic title—'Viscount', 'Marquess' or 'Duke'—and you fall into the subgenre of historical romances, Regency usually. Further references to a geographical or historical setting will immediately appeal to a specific market. For example any mention of the Highlands evokes Scottish lairds, clan wars or Jacobite plots, and of course men in kilts.

Even without being too obvious, some book titles give you an instant feel for the mood of the novel. I doubt anyone picking up Hemingway's For Whom the Bell Tolls, Victor Hugo's Les Miserables or Steinbeck's The Grapes of Wrath would expect a cheerful read with a happy ending, even if they knew nothing of the story.

But what about the element of surprise? Is it a good idea to have a title so obscure readers feel compelled to pick up the book, or is there a danger that they might feel let down if the novel turns out to be somewhat less original than its title suggested? There are of course many great novels with intriguing titles. Among them, I love French novelist Katherine Pancol's The Yellow Eyes of Crocodiles or Cruel Men aren't so Easy to Find. And what about One Hundred Years of Solitude, by Gabriel Garcia Marquez, or Madam, Will you Talk by Mary Stewart?  I wish I could come up with one of those.

So what can an author do if you can't think of a title for her story? Using the name of the main character or of the place or period where the novel is set is a good starting point. So is referring to key words, concepts, or images recurrent in the story and contrasting them (War and Peace is a classic example.) Some authors use a play on words or alliteration to help make a title memorable (Pride and Prejudice, Sense and Sensibility), and some use rhyme (The Cat in the Hat by Dr Seuss.)

When planning a series, it makes sense to have catchy titles that follow on from one another or have the same style. Sue Grafton takes letters from the alphabet - A is for Alibi, B is for Burglar, C is for Corpse. Sophie Kinsella uses the same word in her Shopaholic series, and so does Kathy Reichs for her thrillers, Bones Are Forever, Devil Bones, Break No Bones.

All three parts of Dancing for the Devil, my soon-to-be released trilogy, have been named after Highland dances because the story takes place in Sutherland in the mid-nineteenth century. But I also wanted each title to reflect what was happening in the story, so therefore settled for Dream Catcher, Blue Bonnets, and Sword Dance.

The Lion’s Embrace
Does forever lie in the lion’s embrace?

Arrogant, selfish and dangerous, Lucas Saintclair is everything Harriet Montague dislikes in a man. He is also the best guide in the whole of the Barbary States and the only man who can rescue her archaeologist father, from kidnapping by a gang of Tuareg fighters.

As Harriet embarks on a perilous journey across Algeria with Saintclair and Archibald Drake, her father’s most trusted friend, she discovers a bewitching but brutal land where nothing is what it seems.

Who are the men intent on stealing her father’s ransom? What was her father hoping to find in Tuareg Queen Tin Hinan’s tomb? Is Lucas Saintclair really as callous as he claims – or is he a man haunted by a past he cannot forgive?

In the heat of the Sahara, dangerous passions engulf Harriet. Secrets of lost treasures, rebel fighters, and a sinister criminal brotherhood threaten her life and the life of the man she loves.

"Arrogant, selfish and dangerous, Lucas Saintclair is everything Harriet Montague dislikes in a man." Great beginning for a blurb! Really hooks a reader.

Thank you so much, Angela! I loved writing THE LION'S EMBRACE and creating the romance between Lucas Saintclair and Harriet Montague. I do hope you enjoy the story!