Charmaine Gordon spread her wings at age fifty-four to drive alone to New York City and find a career as an actor. She worked on One Life to Live for eleven years, All My Children for two, and Another World. She also has roles in many movies, including Working Girl and When Harry Met Sally. She had fun with Harrison Ford, lunched with Anthony Hopkins, and sang with Carrie Fisher. Then one day while performing on stage, she noticed her voice felt odd. The next day, a voice specialist confirmed she had spasmodic dysphonia, which put an end to her acting career. That’s when Charmaine started writing. Learn more about her and her books at her website.

I sleep write. Why? I don’t know. One night I dreamed of a fifteen year old girt in Minnesota, a state I’ve never been to. In the morning I began to write, Reconstructing Charlie is book one of a series. Today I introduce the first three.

First, dear readers, a blurb from the girl who started this: 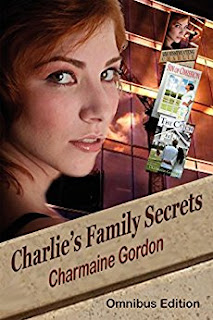 Reconstructing Charlie
In 1996, I killed my father.

Dear old Dad was great with a belt. A belt of whiskey. A belt from around his waist unbuckled when you least expected it and later I knew it was coming and some of us escaped. Not me, not Mom. Never Mom. I’m the oldest. I didn’t want the little ones to see the okay Dad turn into a monster on payday. Every payday. One night he went for Mom, waving a tire iron in the air. This time I was ready. I wrestled it out of his filthy hands and hit him good. He’d never hit little Jimmy or the baby sisters again. Or Mom. She packed a suitcase and told me to run for the midnight bus to Chicago. She gave me an envelope to give someone. Scared, I did as told and ran. I opened the envelope when the bus began to roll.

Dear Eleanor, The girl standing before you is my daughter. Please embrace her, make her your own.

Reconstructing Charlie is the first of the three books in the Charlie’s Family Secrets, now available in one single volume. The two other books are Sins of Omission and The Catch.

Sin of Omission
A twist of fate intervenes when Shelley keeps a secret that threatens to break apart the Costigans and her future. A mysterious client, Deanna Rose, enters Haven, victim of a savage beating under strange circumstances. Shelley investigates and finds Ms. Rose has an unsavory past. With the reputation and safety of Haven at stake, Shelley is at risk to lose everything and everyone she cares about.

The Catch
Tom Donnelly, once known as The Catch – every woman’s dream guy, has fallen down every rung of the ladder he once worked so hard to climb. On New Year’s Day, he realizes just how far he’s fallen, and makes a list of resolutions to change his life. He vows to regain the trust lost from his family, his law firm, and his friends – and maybe even find the right woman this time.

Lois, thanks a bunch for having me as a guest today. What fun to see my life roll out on this page. You have a special knack.