AN INTERVIEW WITH AUTHOR M.S. SPENCER 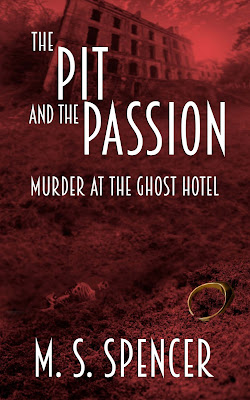 M. S. Spencer writes cozy mysteries and romantic suspense and has published eleven novels. She’s lived or traveled in five of the seven continents but has spent the last thirty years mostly in Washington, D.C. as a librarian, Congressional staff assistant, speechwriter, editor, birdwatcher, policy wonk, non-profit director, and parent. After many years in academia, she worked for the U.S. Senate, the U.S. Department of the Interior, in several library systems, and at the Torpedo Factory Art Center. Today she sits down with us for an interview. Learn more about her and her books at her website.

How long did it take you to realize your dream of publication?
I’ve been writing all my life, and had a few things published but only started to write novels 15-16 years ago. I wrote a novel before we had computers, and when we moved, my husband threw out the only copy I had of it. I loved him anyway. Then I got my first contract in 2008 with my first novel published in 2009.

Are you traditionally published, indie published, or a hybrid author?
Hybrid.

Where do you write?
In my study. It works for me to have a specific space dedicated to work (I think it helps tax-wise as well.

Is silence golden, or do you need music to write by? What kind?
I must have QUIET! Guess I can’t multitask like some people.

How much of your plots and characters are drawn from real life? From your life in particular?
Plots: no. Characters: not really. But events and little things are definitely drawn from my rather peculiar life. And no, I will not divulge any of them.

Describe your process for naming your character?
This is almost as fun as deciding who to dedicate my book to. I usually can’t even tentatively assign a name until about the third chapter. It has to fit the emerging character. Even then, thanks to the wonders of modern technology (Find & Replace) I may change my mind a thousand times.

What’s the quirkiest quirk one of your characters has?
Oh golly, they’re all pretty quirky. Rancor Bass, hero of The Pit & the Passion, is a best-selling, wildly popular, wealthy author—and the cheapest man on the planet. But he’s awful cute.

What’s your quirkiest quirk?
You’d have to ask my friends (DON’T ask my family.) Maybe that I’m the easiest person in the world to tease?

If you could have written any book (one that someone else has already written,) which one would it be? Why?
The Late George Apley by J. P. Marquand. It is one of the most exquisitely crafted books I’ve ever read. Or (big surprise) Pride and Prejudice.

Everyone at some point wishes for a do-over. What’s yours?
I would have been really, really tough on my husband’s smoking instead of thinking he could do it on his own. Too late now.

What’s your biggest pet peeve?
Ah, where do I begin? Gum chewing (do they know how bovine they look?), then people who can’t seem to get the extremely simple difference between “lend” and “loan.”

You’re stranded on a deserted island. What are your three must-haves?
A lot of Jack Daniels, a clever man, and…I think that’s all I need.

What was the worst job you’ve ever held?
The one retail job I ever had—for the 1970s equivalent of a dollar store. I was thrilled that I could get anything I wanted with my employee discount—trouble was, there was absolutely nothing I wanted. I also thought it was cool to be able to go through the door marked “Employees Only”, only to discover a disgusting bathroom on the other side. I did learn how to fold shirts.

What’s the best book you’ve ever read?
That is totally impossible to answer.

Ocean or mountains?
I have to have water nearby, but the ocean is not user-friendly enough. I like my Gulf of Mexico. I like mountains, too—not just forested ones, but pink bare rock like in Arizona. Do I have to choose? Why?

City girl/guy or country girl/guy?
Country. As Daniel Boone was fond of saying, I need my elbow room.

What’s on the horizon for you?
I just submitted a new mystery set on Amelia Island, FL. Lots of history and bodies. I’m working on a novel set in the Peruvian Amazon. And I’m going to the beach.

Anything else you’d like to tell us about yourself and/or your books?
Two of my books—Lapses of Memory and The Penhallow Train Incident—are in the process of being put onto audio format. A fascinating process.

Also, a little back-story about The Pit and the Passion: Murder at the Ghost Hotel: Set on Longboat Key, on the Gulf Coast of Florida, it is one of the barrier islands that protects Sarasota from the bad moods of the Gulf of Mexico. In the early 1920s John Ringling, of the Ringling Brothers Circus, began a concerted effort to promote the area. He planned housing developments, hotels, the St. Armand’s Circle shopping district, and other elements to draw northerners to Florida. His last great endeavor was the Ritz-Carlton at the tip of Longboat Key. Construction began in 1926…and ended in 1926. The hulk sat moldering until 1964 when it was finally torn down. To locals it was known as the Ghost Hotel.

The Pit and the Passion: Murder at the Ghost Hotel
At midnight, in the darkness of a deserted hotel, comes a scream and a splash. Eighty-five years later, workmen uncover a skeleton in an old elevator shaft. Who is it, and how did it get there? To find out, Charity Snow, ace reporter for the Longboat Key Planet, teams up with Rancor Bass, best-selling author. A college ring they find at the dig site may prove to be their best clue.

Although his arrogance nearly exceeds his talent, Charity soon discovers a warm heart beating under Rancor’s handsome exterior. While dealing with a drop-dead gorgeous editor who may or may not be a villain, a publisher with a dark secret, and an irascible forensic specialist, Charity and Rancor unearth an unexpected link to the most famous circus family in the world.

Thank you so much for having me on your lovely site, Anastasia! I had a great time--it's always fun to talk about oneself :). I hope your readers enjoy the interview. M. S.

Fun interview! Jack Daniels and gum chewing? Me too, except mine would be Knob Creek. No music for me either, unless I listen before I write to put me into a mood.
Hugs, L.A. Sartor

JD--Tennessee sipping whiskey all the way Leslie Ann! But we can agree to disagree! :)

I’ll remember to never chew gum around you. Promise. I plan to check out the book. I love mysteries and add a ghost and I’m in heaven.

Terrific interview! And now I'm totally intrigued by your characters.

Thanks everyone for your lovely comments!

I'm intrigued by your "catchy" title! Best wishes with your release!!!

I loved the tidbit about the Ghost Hotel! I promise to never chew bubble gum around you. But I blow amazing bubbles. LOL
Best of luck!

Yikes! Your husband threw out your book? Didn't that happen to Hemingway? Maybe there's something in that. Best of luck with your release.

I've been told my characters are on the quirky side too. Your journey in writing sounds similar to mind. The new book sounds as good as your other ones!

How nice to be so well-traveled that you are able to use and invent exotic settings. Old English teacher that i am, what gets me is incorrect use of I/me when it comes to objective case. "Come to the movies with Bob and I." (CRINGE)
Lovely interview and just keep on writing!