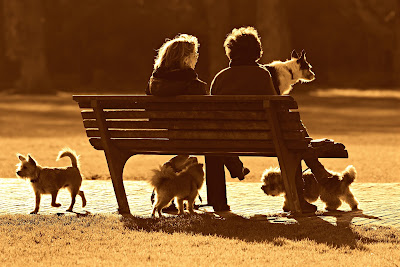 C. A. Newsome is an author and artist living in Cincinnati with a one-eyed, zombie swamp monster named Gypsy Foo la Beenz. They can be found most mornings at the Mount Airy Dog Park, digging up clues to Carol’s next mystery. Learn more about C.A. and her books at her website.

Northside, where I live, has more dogs than children. The real-life dogs around me are central to my stories: dogs who vomit on the rug, commit more escapes than Houdini, and eat furniture instead of waiting politely at home for an invitation to run on the beach we don’t have.

My plots are born of the odd juxtapositions of life in my mid-gentrification, artsy-urban neighborhood: funky events, a rotating slate of shoestring storefronts, eccentric characters, historic architecture, and more urban forest than anywhere outside of Central Park. I start with two or three evocative and unrelated ideas, massage them with a sense of the absurd, then subject the result with repeated applications of “what if.” 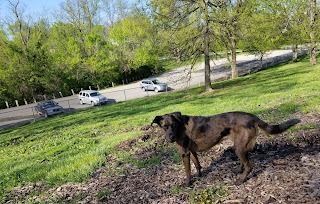 Two, maybe three years before I ever considered that I could or even wanted to write a novel (which is a story in of itself and explains the selection of my first murder victim), I was sitting at a picnic table at the Mount Airy Dog Park with my crew of morning regulars. The dog park is on a ridge overlooking the parking lot, and we keep our eyes on the lot to get advance warning of incoming dogs that might not be friendly. Non-dog people also use the lot for drug deals, work breaks (authorized or not), and to conduct illicit affairs.

Determining the purpose of each unknown vehicle entering the lot became a habit, then a game. I said to my oldest dog park friend, “Someone needs to write a mystery series about dog parkers who solve crimes because they watch everyone around them.”

The idea lingered until I caught up with it. Then it unfolded: how people who go to dog parks develop relationships with people they know nothing about, how the schedule you keep with your dog will toss you in with people you might have little in common with, how easy it would be to become friends with someone dangerous and not know it.

Midway through this process, a woman committed suicide in her van in the parking lot. My friends found her the next morning instead of me since I was running late. I arrived to find the park blocked off with barricades and yellow tape. The park buzzed with speculation for weeks, and A Shot in the Bark was born. 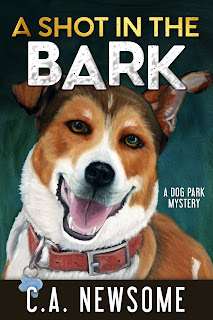 A Shot in the Bark
A Lia Anderson Dog Park Mystery, Book 1

A grieving artist, a smitten detective, a devious killer: You never know who you'll meet at the dog park.

When the apparent suicide of Lia’s deadbeat boyfriend draws the attention of Detective Peter Dourson, he decides to adopt the dead man’s dog to infiltrate the tight group he’s certain conceals Luthor Morrissey’s killer. As his investigation uncovers secrets, a grieving Lia fights her growing attraction to the laid-back detective. Meanwhile, Luthor's killer lurks, desperate to stay ahead of the investigation—no matter who has to die…

Buy Links
paperback
ebook (currently free at all etailers)
Posted by ANASTASIA POLLACK at Tuesday, May 14, 2019