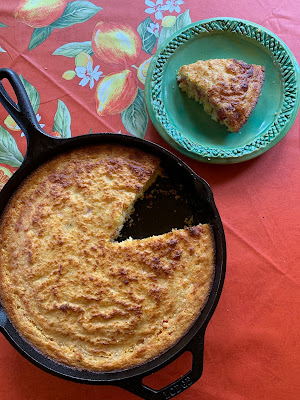 Multi-award winning mystery author Terry Shames writes the Samuel Craddock series, set in small town Texas. Along with her numerous other awards, Terry has been named one of the top five Texas mystery authors. Today she joins us to talk about the eighth book in her series and share a recipe for Tex-Mex cornbread. Learn more about Terry and her books at her website.

I once attended a talk by writer Joan Didion, in which she advised writers to put “everything you know” into every book. She said that you might feel like you should keep something back for another book. But she said that when you started to write your next book you had another whole book’s worth of things to say. When I write the Samuel Craddock books, that’s the approach I take. I fling everything I know into the plot and the characters. I think that’s the way to make it seem real. Life has a lot of undercurrents, and so should the books we write. There’s always more when you’re ready for the next one!

A Killing at Cotton Hill had art at the center of it. When I was a child, I saw a picture my uncle had painted and thought it was wonderful that someone I knew had painted a real picture. I’m also passionate about contemporary art, and wanted to include an element of that in the book. It turned out that Samuel Craddock has a wonderful contemporary art collection!

In high school I knew a boy who went off to war and was badly wounded. I never saw him again, but his story haunted me and I wanted to write a book that was something of an homage. The Last Death of Jack Harbin featured a war veteran who had been gravely wounded.

The idea for Dead Broke in Jarrett Creek was born when a town near where I live went bankrupt. As a side note, I wanted to make Samuel Craddock the chief of police again, so he wasn’t just on the sidelines solving crimes. When the town went broke, they couldn’t afford to pay a full-time cop, so Craddock was the natural heir to the title of Chief.

Years ago, my mother had confessed to me that someone she knew thought her son had killed his first wife. What a delicious idea for a murder mystery! In A Deadly Affair at Bobtail Ridge, it became a great back story.

Lies and secrets always make good stories, and in The Necessary Murder of Nonie Blake, they led to misery for a family. The main character, Nonie, was based on someone I actually knew who not only kept secrets, but lied about them.

Easily the most “real” of my books was the prequel, An Unsettling Crime for Samuel Craddock. For this book, I took liberties with an actual murder that occurred in the town that Jarrett Creek is based on. When I decided to use the real case, I looked it up and found that a year earlier, the man convicted of the crime had been freed by the Innocence Project. It made my story feel even more urgent to me. It was important that Chief Craddock find out what really happened in order to avoid in my fiction real life fate.

A Reckoning in the Back Country was my hardest book to write, not only because it was based on something I know to be real in Texas—dogfighting—but because the victim was someone I wanted to kill in real life! A doctor botched my shoulder replacement in real life, so I decided to kill him in my book. The problem was that I made him so awful in the first draft, that I realized no one would care whether his killer was found!

Which brings me to my latest, A Risky Undertaking for Loretta Singletary. This is probably the first book I have written that did not come from real life. It grew out of my wanting to put one of my recurring characters, Loretta, in danger. Loretta loves to cook, and brings baked goods to all her friends. When she fails to do so for several days, they realize something is amiss. It turns out that Loretta was looking for someone to date on an online dating site, and got herself into trouble. After writing the previous book, I enjoyed this one because it’s full of humor.

In honor of Loretta, I’m bringing you the recipe for:

Note: If you like it spicy, add a minced Jalapeño pepper.

Pour into well-greased 10-cast iron skillet. Bake 25-30 minutes. Check halfway, and if too brown, cover loosely with foil.
*I used medium grind. It falls apart more easily, but I like the texture.
Warning: This recipe is not good for you! 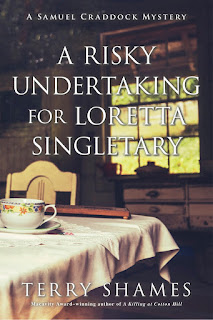 A FAVORITE SERIES CHARACTER FINDS HERSELF IN HARM'S WAY.

After using an online dating site for senior citizens, town favorite Loretta Singletary--maker of cinnamon rolls and arbiter of town gossip--goes missing. Chief Samuel Craddock's old friend Loretta Singletary--a mainstay of the Jarrett Creek community--has undergone a transformation, with a new hairstyle and modern clothes. He thinks nothing of it until she disappears. Only then does he find out she has been meeting men through an online dating site for small-town participants. When a woman in the neighboring town of Bobtail turns up dead after meeting someone through the same dating site, Craddock becomes alarmed. Will Craddock be able to find Loretta before she suffers the same fate? Finding out what happened to Loretta forces him to investigate an online world he is unfamiliar with, and one which brings more than a few surprises.

I enjoyed reading how a memory or experience gave you the spark to write each of your mysteries. I will check out your series. Being a Texas gal, I love mysteries set in Texas. And thanks for reminding me about Tex-Mex cornbread. My father used to make it all the time. I need to dig out that recipe.

Thank you Kathleen. It really is a mysterious process, how memory works to spur writing. Regarding the cornbread, I love to cook and am so happy that I got the "cooking gene."

I really enjoyed you talking about where you got your ideas for the different books, Terry. And, I'll show the Tex-Mex cornbread recipe to my husband, as he's the cornbread lover in the house.

Wait, Kathy, are you telling me you aren't a fan of cornbread? Surely you jest!

Very interesting post. I enjoyed reading about your use of real experiences.
Judy