Kris Pearson is the author of eighteen romances and two cozy mysteries. If it's fine, she gardens. If it's wet, she writes. And if the writing's going well, the garden can look after itself.  Learn more about Kris and her books at her website.

Where Is Drizzle Bay?
The Merry Summerfield cozy mysteries have taken over my writing life. I’m enjoying myself SO MUCH and I think it shows in the books. My ‘series bible’ for them is growing constantly because new people are always being added to the cast. The books are set in Drizzle Bay, New Zealand. Does it exist? Not by that name! If you drive north from Wellington along our wild coastline you’ll come to several places who’ve each added their own features to Drizzle Bay, though.

Why is it called that? Because of Jim Drizzle’s old family farm. He’s now Lord Drizzle because he unexpectedly inherited an English title. (This is fiction – I can do that!) In fact we did have a similar thing happen here many years ago, so maybe it’s not entirely fiction.

I thought you might enjoy some photos of where I’m from, and the inspirations for Drizzle Bay. For many years I’ve lived in Wellington, which is the capital city of New Zealand but not its largest city. We have an almost circular harbor, protected by quite steep hills. The first shot (above) is one I took a few weeks ago while we were at a house overhanging the water. It had been foggy, and the fog was just rolling away to reveal the business district on the other side. It was a magic morning.
It’s not always this still, though! We have the reputation of being windy. Entirely true. As Vicar Paul tells his sister when he and Merry collect her at Wellington airport in Xmas Marks the Spot, Wellington sits in a gap between two steep islands. The wind whistles though that gap at a fair old speed sometimes. To celebrate this, our new airport control tower has been built to lean into the prevailing wind by a jokey twelve degrees. Definitely an icon. The Leaning Tower of Pisa is only four degrees. ‘Ours’ has good foundations though, and we’re not expecting it to fall right over.

As you leave the city you drive north past Porirua – home of world-famous Whittaker’s chocolate – then along the grandly named Centennial Highway. This skirts the water for miles with views of Plimmerton, Pukerua Bay and Paekakariki (often naughtily shortened to ‘Pie-cock’).  They’re all Drizzle Bay, and yet they’re not.
I took this last shot from the Paekakariki Hill Road. It’s so steep that long vehicles are banned from using it. Far below you can see the railway line on the right, the main highway next it, and then the Tasman Sea – next stop Australia.

The third in the series will be Dead and Disorderly, and this time Merry will be looking after a collection of cats. 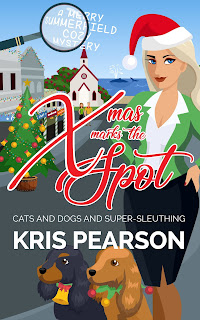 OMG! Who hid a quarter of a cow in the trunk of my brother’s beloved Mercedes? And what’s with that spooky big X marking the spot on the beach where a man lies dead? Can my quarter-cow and the corpse possibly be connected?

Detective Bruce Carver doesn’t think the body is any of my business, but someone’s up to no good amid the twinkling Christmas decorations in drowsy Drizzle Bay.

I’m sure I can help, but maybe I’m too curious for my own good. Who’s going to rescue me now a smelly rustler has roped me up far too close to that big white X? Not my brother Graham and his two goofy spaniels. Not old Margaret and little Pierre the poodle. Not my ex-husband, the unfaithful Duncan Skene. I need a super-resourceful man with … umm…muscles.