#CRAFTS WITH ANASTASIA--AUTHOR CONNIE BERRY ON CRAFTS FROM THE PAST

Today we take a look at crafts from the past with author Connie Berry. Like her protagonist, Connie was raised by antiques collectors in a home filled with objects from the past. Connie loves history, cute animals, travel with a hint of adventure, and all things British. Learn more about her and her books at her website.

Digging Up the Past
Writing about antiques comes naturally to me. My parents were dealers with a national reputation for high-quality objects, sound research, and fair prices. Like me, my protagonist, Kate, grew up in the antiques trade. Each of the novels in the Kate Hamilton Mystery series revolves around a valuable object that proves central to the resolution of the crime.

In my series debut, A Dream of Death, the object was an eighteenth-century marquetry casket containing clues to both an historic and a current-day murder. In book two, A Legacy of Murder, that object is a blood-red ruby ring, part of a trove known as The Finchley Hoard, discovered in 1818 by an enterprising but ultimately hapless descendant of the man who buried it.

A Legacy of Murder is set in Suffolk, England, a gently rolling, rural county, known for its ancient Roman culture as well as for the Anglo-Saxons who settled there in the mid-fifth century A.D. This area, known as East Anglia, is famous for the discovery of buried treasure troves—unearthed by archaeologists, metal detectorists, and sometimes ordinary folk. The wonderful British TV series, The Detectorists, was set in north Essex, just over the Suffolk border.

In past centuries, before banks and safe-deposit boxes, the safest place to conceal your wealth in times of emergency was the ground—as long as you remembered where you'd put it. Often, through death or other disasters, buried treasure was lost and remained undiscovered for centuries. Three of the most famous in Suffolk are The Mildenhall Treasury, The Hoxne Hoard, and the treasures of Sutton Hoo.

The Mildenhall Treasury, thirty-four pieces of Roman silver tableware from the fourth century A.D., was unearthed in 1942 by a farmer ploughing a field. The pieces were claimed by the landowner, who actually used them at home until 1946 when the existence of the trove was made known to authorities and legally declared "treasure trove."

In England, valuables found hidden without any knowledge of their owner, belong to the Crown. The Mildenhall Treasure was subsequently acquired by the British Museum. The most famous piece is the Great Dish (also known as the Neptune Dish from the face of a sea-god at its center), measuring about two feet in diameter and weighing just over 18 pounds. An interesting feature of the collection is the decoration, combining traditional pagan themes with a touch of the new Christian faith. Two small dishes bear on their undersides scratched graffiti in Greek: eutheriou, meaning "property of Eutherios." One Roman citizen, dead or alive, left his treasure behind him.

The Hoxne Hoard is the largest hoard of late Roman silver and gold ever found in Britain. Discovered in 1992 by metal detectorist Eric Lawes, the hoard consists of almost 15,000 gold, silver, and bronze coins, and approximately 200 items of silver tableware and gold jewelry, now on permanent display at the British Museum. The hoard was found carefully wrapped and stored in a number of decayed wooden boxes and fabric bags. The coins were all dated after 407 A.D., the end of Roman rule in Britain. A lovely gold bracelet (shown at the top of this post) bears the Latin description Vtre Felix Domina Ivliane, meaning "Use [this] happily, Lady Juliane." That makes me sad. Were Juliane and her family forced to flee for their lives? Sounds like the beginning of a novel to me.

Sutton Hoo, on an estuary of the North Sea, is the site of twenty or so sixth- and early seventh-century earthen burial mounds. One held an undisturbed ship-burial containing a wealth of Anglo-Saxon artifacts. While the originals reside in the British Museum, my husband and I explored the site a few years ago and took in the wonderful reproductions in the Visitor Centre. Even though no body was found in the tomb (dissolved long ago by the acidic soil?), many scholars believe the tomb belonged to Rædwald, King of East Anglia, who died in 624 A.D. The most famous artifact is the Sutton Hoo helmet made of skillfully embellished panels of tinned bronze.

Ready to grab your metal detector and head for Suffolk? Good luck!

BREAKING NEWS!!! London's Daily Mail reported that Don Crawley, a Suffolk builder and amateur detectorist, unearthed a stash of 99 immaculately preserved Anglo-Saxon coins worth up to £50,000 dating back to the reign of Ethelred the Unready 1,000 years ago. One expert suggested they were buried by someone fearing a judgment day.

Have you ever made a surprising find? What's the most precious object ever bequeathed to you? 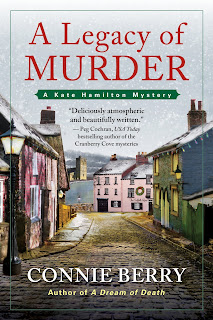 A Legacy of Murder
A Kate Hamilton Mystery, Book 2

What could be lovelier than Christmas in England? American antiques dealer Kate Hamilton arrives in the Suffolk village of Long Barston, dreaming of log fires, steaming wassail, and Tom Mallory, the detective inspector she met during a recent murder investigation in Scotland. Kate also looks forward to spending time with her daughter, Christine, an intern at Finchley Hall, famous for the unearthing in 1818 of a treasure trove known as The Finchley Hoard. But when the body of another intern is found floating in Blackwater Lake, romance takes a back seat. Long Barston is on Tom Mallory’s patch, and the clues to the killer’s identity point backward more than four hundred years to a legacy of murder and a blood-red ruby ring.