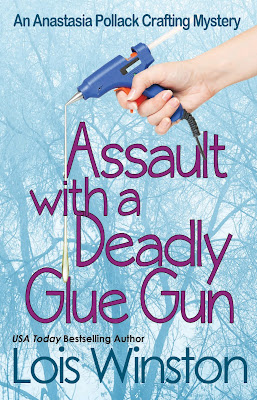 Because our scheduled guest bailed on us today, Lois Winston, that sadistic mystery author who spends her life tormenting me, is stepping in to tell you a little bit about herself and how she came to spend her life tormenting me. She does have ulterior motives. Assault With a Deadly Glue Gun, the first book about yours truly (there are now eight, plus three novellas), is currently on sale for .99 cents for a limited time at Kobo and Amazon. Learn more about Lois and her books at her website.

Life’s journey is rarely a straight line. It certainly hasn’t been for me. Way back when I was working toward my BFA in graphic design and illustration, I never would have imagined that someday I’d be writing novels. Since graduating from college {{cough! cough!}} years ago, I’ve worked as a layout artist for two advertising agencies as well as the world’s oldest department store, an illustrator for the publications and alumni departments of two major universities, a freelance designer of needlework kits, a designer and design coordinator for a major manufacturer, a craft book editor, and a magazine freelancer. And that was all before I got the crazy idea to write my first novel.

Even then, my career didn’t proceed along a straight line. I started out writing romance, and now I’m killing people for a living—but only in my novels! I also spent twelve years as a literary agent, working for the agency that represented me. Is your head spinning yet? Mine is just thinking about my rollercoaster of a professional life!

I’m now a retired designer, a retired literary agent, and a retired romance writer. Truthfully, I find killing people (on paper) far more fun than writing sex scenes. I spend my days getting my reluctant amateur sleuth, Anastasia Pollack, into trouble while sitting at my computer recording her antics as she attempts to thwart my efforts.

I don’t think Anastasia likes me very much, but I can hardly blame her. Before I came along, she was leading a typical middle-class life in the suburbs with her husband and two teenage sons. About the only not-so-typical part of her life was the Shakespeare-quoting parrot she’d inherited from her great-aunt.

That all changed when I decided to kill off Anastasia’s husband prior to the opening pages of the first book. Unbeknownst to her, the two-timing louse was having an affair with Lady Luck. He gambled away all their money, leaving her to deal with staggering debt, his communist mother, and a demanding loan shark. You can read all about it in Assault With a Deadly Glue Gun, the first book in the Anastasia Pollack Crafting Mystery Series. And as Anastasia mentioned above, the ebook is currently on sale at Amazon and Kobo for only .99 cents.

“Crafty cozies don’t get any better than this hilarious confection...Anastasia is as deadpan droll as Tina Fey’s Liz Lemon....” – Publishers Weekly (starred review)

When Anastasia Pollack’s husband permanently cashes in his chips at a roulette table in Vegas, her comfortable middle-class life craps out. She’s left with two teenage sons, a mountain of debt, and her hateful, cane-wielding Communist mother-in-law. Not to mention stunned disbelief over her late husband’s secret gambling addiction, and the loan shark who’s demanding fifty thousand dollars.

Anastasia’s job as crafts editor at American Woman magazine proves no respite when she discovers a dead body glued to her desk chair. The victim, fashion editor Marlys Vandenburg, collected enemies and ex-lovers like Jimmy Choos on her ruthless climb to editor-in-chief. But when evidence surfaces of an illicit affair between Marlys and Anastasia’s husband, Anastasia becomes the prime suspect. Can she find the killer and clear her name before he strikes again?