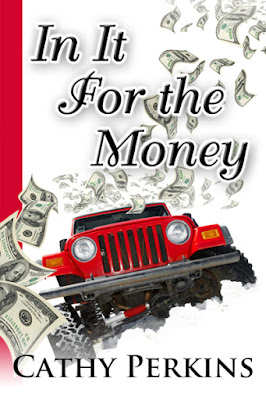 Today we sit down for a chat with Holly Price from author Cathy Perkins’ Holly Price Mystery Series.

What was your life like before your author started pulling your strings?
Before this series of books began, I was climbing the ladder at Falcon, a top-notch, mergers and acquisitions firm in Seattle, when my author sent me tumbling back into Richland, my hometown in eastern Washington. My father had a mid-life melt-down, bailed on my mother, and then took off for Sedona with his yoga instructor. I ended up putting my career in Seattle on hold so my mother and I could get Desert Accounting, the family business, in shape to sell.

I’m settling in again and amazed to find I actually enjoy the work, or should I say, getting to know the clients and their business. Now if I could get my family to settle down…

What’s the one trait you like most about yourself?
Hmm, I’ll ask for three things… No? Okay, let’s meet in the middle and I’ll tell you about two things. (I did tell you I like to negotiate.) First, I’m loyal to my friends and family. JC—I’m not sure what to call him right now, not-so-ex-fiancé? Boyfriend sounds silly at our age—says I push that loyalty to extremes, but I don’t like it when they’re accused of wrongdoing. Plus, I know they’ll have my back if I need them.

The other thing I like is perseverance. Whatever I set out to do, in business or helping my friends, I see it all the way through. Both of these traits can get me into tight spots, but I still think I’m on the right path.

What do you like least about yourself?
Seriously, I’m not as uptight as Cathy Perkins occasionally makes me seem. And Rick, my chief manager at Desert Accounting and best ally, tells me I’m better with the staff than I think, but I do have to remind myself not to scare them.

I may be a bit driven. I have a lot on my plate, what with Dad having his mid-life melt-down and bailing on Mom. Mom expects me to bring in new business, train the staff to handle the project work, and keep the rest of the practice running. Then these client and family disasters—whew!

I admit, I got involved in the investigation trying to clear Tate’s name and keep that ridiculous local reporter from destroying the businesses my client and I had built. But then it became figuring out…well…who was in it for the money?

What is the strangest thing your author has had you do or had happen to you?
Cathy’s thrown some crazy things at me before, but I’m not sure what’s stranger this time: participating in a Rockcrawler event—seriously, think monster trucks crawling up impossible slopes or over giant boulders—or breaking into a warehouse with an undercover DEA agent.

Do you argue with your author? If so, what do you argue about?
We argue constantly about whether I should go back to Seattle and Falcon, or stay in Richland and take over Desert Accounting.

What is your greatest fear?
Up until the past few weeks, I’d have said spiders. I hate spiders. And spiderwebs. But now? My biggest fear is either falling in love with JC again or someone shooting me.

What makes you happy?
I love hanging out with my friends, going to dinner or one of the great local wineries. Don’t tell anybody, but I have fantasies about having time to curl up on the sofa—did I tell you I was renovating a house? I can see a soft leather sofa in front of the fireplace, a cashmere throw, a fire and a book. Yeah, that isn’t happening.

If you could rewrite a part of your story, what would it be? Why?
My cousin’s debut product wouldn’t have made a disastrous launch and Danny Shaw would not be dead. I get that there wouldn’t be a book if there wasn’t a crime, a mystery to investigate, but Tate and Danny really didn’t deserve what happened to them.

Of the other characters in your book, which one bugs you the most? Why?
I really like the people I work with at Desert Accounting, but there’s a new associate who’s driving me crazy, not taking responsibility for her actions.

Hmm, I could say the same thing about a couple of family members, I mean people, I mean characters…

Of the other characters in your book, which one would you love to trade places with? Why?
I’d trade places with Laurie Gordon, my best friend. Sure, it’s hard to tell what’s really going on in someone else’s life, but she always seems to have her act together. Plus, she does a great Yoda impersonation.

Tell us a little something about your author. Where can readers find her website/blog?
Cathy has written a lot of books. Of course, the best ones are about my friends, family, and me, but that’s just my opinion. Check out her website for more about her and her books and to see which you like better - her amateur sleuth stories or the suspense ones.

What's next for you?
I hear there’s a new book in the series, Calling for the Money! I really need to see where things are going with JC. My author tells me there’s also a new novel under way about my half-sister. Somehow, I get dragged into her drama. What is it with me and my family?

In It for the Money
A Holly Price Mystery, Book 4

Holly Price traded professional goals for personal plans when she agreed to leave her high-flying position with Falcon, the Seattle-based mergers and acquisition team, and take over the family accounting practice. Reunited with JC Dimitrak, her former fiancé, she’s already questioning whether she’s ready to flip her condo for marriage and a house in the ‘burbs.

When her cousin Tate needs investors for his innovative car suspension, Holly works her business matchmaking skills and connects him with a client. The Rockcrawler showcasing the new part crashes at its debut event, however, and the driver dies. Framed for the sabotage, Tate turns to Holly when the local cops—including JC—are ready to haul him to jail. Holly soon finds her cousin and client embroiled in multiple criminal schemes. She’s drawn into the investigation, a position that threatens her life, her family and her already shaky relationship with JC.

Hi Lois,
Thanks for letting Holly and me visit today!

Happy to have Holly join us today, Cathy!