Jeannette de Beauvoir didn’t set out to murder anyone—some things are just meant to be! She wrote historical and literary fiction and poetry for years before someone asked her what she read—and she realized mystery was where her heart was. Now working on the Sydney Riley Provincetown mystery series, she bumps off a resident or visitor to her hometown on a regular basis. Learn more about Jeannette and her books at her website.

Murder Most Ladylike
Why is it that women become so engaged with murder mysteries?

Here’s the thing: while only about a third of published authors in almost all genres are women, women have long made up the majority of adult readers. We read. A lot. And, more and more, both as readers and as writers, we’re turning to crime… the crime of choice being, of course, murder.

And I’m not just talking about a gentle PBS-Geraldine-McEwan-as-Miss-Marple kind of murder, either: we’re going for violent death as wholeheartedly as have our male counterparts. Think about it: the mysteries that involve a clever theft, or blackmail, or deceit of some sort usually seem, to a seasoned mystery reader, all a little… flat. But put a little murder into the mix, and we perk right up.

The most obvious answer is that death ups the ante, makes it’s something worth thinking about, worth puzzling over. Reading about death (and especially, perhaps, violent death) allows us to vicariously experience something that we’re afraid of and—most of the time—don’t talk about. It’s a truism that death has replaced sex as the taboo topic of social intercourse; but our psyches still need to deal with it, and preferably in some way far removed from our eventual personal demise. It’s the only explanation I can find for the morbid curiosity that keeps people hanging around the scene of an accident or behind police tape after any tragedy, a sort of fascinated schadenfreude; and it’s a good explanation for why we read murder mysteries.

But it’s not the only one. We also like to see justice done, especially when we perceive that the real world isn’t playing fair with us. If the guilty party is caught and punished in the fiction we read, then perhaps we regain the sense of order that’s lost whenever we hear the news. Every day, we see situations that have us baffled, and our minds seek to cope with them: it often feels that everything is getting way too far out of control. Reading about Inspector Whatever arresting the culprit restores a little harmony, a little control, a little of a feeling of safety.

Ah, safety. To my mind, that’s the real pointer toward why women love murder mysteries. Safety is, for us, an all-important consideration. As women, we understand what it feels like to live with fear humming constantly in the background of our lives. Most of us grew up being consistently told—by the media, by our protective parents, by horror tales at summer camp, by the experiences of our older sisters—just how vulnerable we are. We’re not to wear short skirts. We’re not to walk alone at night. We’re not to smile at men in bars. We’ve been told effectively that just by virtue of being female, we’re wearing a big sign proclaiming, “Victim here! Victim here!”

That low hum is always there in the background; but when we read or write crime fiction, we can explore our fear safely—and we can see it resolved.

Many of our crime novels feature a woman protagonist, the solver of crimes, the avenger of the innocent. She’s usually more harried than her male counterparts: they tend to be divorced loners, while she’s still trying to hold it all together. Yet she’s the one who takes that body emotionally home with her, she’s the one who always remembers that it’s the victim, and not the killer, who is central to her case.

As women readers, we identify with this female protagonist. As much as the victim in the autopsy suite, she is us, too: she is working hard to make the world a better place while remembering to pick her twelve-year-old up after hockey practice and getting the mammogram scheduled and buying the broccoli and trying to figure out whether her fifteen-year-old is smoking pot. And yet with all her imperfections, she’s the one who’s going to solve the crime. She’s the one who will restore our faith in balance in the world. She’s the one who will speak for the victim.

And that’s a very good reason to read mystery fiction. 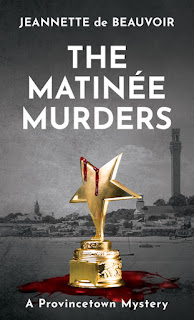 It’s time for the Provincetown International Film Festival, and wedding planner Sydney Riley has scored a coup: her inn is hosting the wedding of the year. Movie star Brett Falcone is to marry screenwriter Justin Braden, and even Sydney’s eternally critical mother is excited. The town is overflowing with filmmakers, film reviewers, film buffs, and it’s all the inn can do to keep up with the influx of glamorous celebrities and host their star-studded events.

But when Sydney opens a forbidden door in the mysterious Whaler’s Wharf, she discovers the body of a producer—and a legion of unanswered questions. Who strangled the innocuous Caroline Cooper? What dark force followed Brett and Justin from LA? Why is her boss Mike tense and double-checking every room at the inn? And is Mirela really leaving P’town forever? Sydney and her boyfriend Ali need to find the answers fast before another victim takes a final bow.

My thoughts exactly! It's safe to grapple with murder and our feelings around it through books.

Thanks, Dianne. In a different article I compared mysteries (for adults) to fairy tales (for children). A way of working out the dark things without actually experiencing them!

I love your points about safety and justice. At the end of the day, that’s what we want, but it’s so much fun to fall into one of your novels, and watch your heroine make things right! Love Matinee Murders, btw! Twisted and delightful ride!

Thank you, Julie! It's so kind of you to say that. I love crafting twisted endings... I'm not in the stratosphere like Dennis Lehane or Thomas H. Cook... but I aspie to be!

Good discussion about why women read and write crime fiction, making use of our own experiences and real world.

Great article, Jeannette! I like your points about justice and safety, fairy tales and mysteries. My 99-yr-old mother, who passed away peacefully in her sleep last month, once said that "all life is a murder mystery"--whose the next victim? how will Death do them in? I think she would have enjoyed your books!