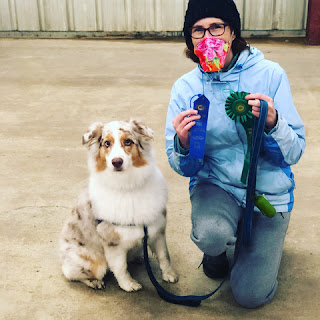 Bestselling and award-winning author Terri Reed writes romance and romantic suspense, and her novel A Family Under the Christmas Tree was adapted into a Hallmark movie retitled Picture a Perfect Christmas. Today she joins us to talk about how agility training her dog has helped her writing process. Learn more about Terri and her books at her website.

I’m an avid dog lover and have written many books featuring canines. When I was a child, my parents bought me a puppy. I loved this little guy so much. His name was King Kong. I have no idea what breed he was, I believe a mix of some sort of shepherd and terrier. He was wild and an escape artist. He would find inventive ways to get out of the backyard.

Unfortunately, the herding instinct was very strong. He would chase cars and ultimately one car won. I remember vowing to never have a dog again. Fast forward to adulthood. My husband really believed we needed a family dog. I was resistant but he and the kids finally won out. We brought home an Australian shepherd with a blue merle coat and named her Blueberry. I fell in love with this dog. I researched how to care for a puppy/dog and Blue, as we called her, lived to the ripe age of fourteen. She was the best dog ever. So patient with the kids, would keep track of them and make sure to alert if anyone that didn’t belong in the neighborhood ventured near. But she was the family dog, a pet well loved by each of us.

After she passed, my husband and kids, once again talked me into getting another puppy. We decided to stick with an Australian shepherd. We brought home Aubrey with a red merle coat. I was expecting Aubrey to be like Blue. Even tempered, patient and snuggly. Not so much. Aubrey is not a pet; she is a performance dog. To that end and to keep her and me sane, we started agility training when she was eight months old. At first it was to keep her active and wear her out so I could write. But I fell in love with the sport and with her. Agility really bonded us. She may not be the most snuggly dog or patient, actually, she’s quite bossy, but I can’t imagine my life without her. Through this dog, my husband and I were introduced to some people at the park who then introduced us to some other people, and now we have a whole new community of friends because of Aubrey.

Doing agility with Aubrey has opened up a new world of activity and more new friends. Learning the sport of agility was a huge learning curve for me. What started out as something fun to do to keep her busy, has become a lifestyle and the thing I do to keep my mind creative when not writing books. We are always training, even when we’re not at the arena. Even going on walks is a lesson to be used in the arena. Learning the command to sit and wait until released is a daily exercise done at feeding time. She has a beautiful start line stay. This month, after nearly four years of training, I finally worked up the courage to enter agility trials.

The first week trial was overwhelming. I didn’t know how a trial ran, wasn’t sure I liked the idea of competing or that she’d listen to me in a strange environment. I learned what to expect, I made the decision not to look at the trial as competing against anyone else, but the goal is to finish the course with or without faults (faults are a dropped bar, a refusal to take an obstacle, a late cue or going off exploring). And during our first run, she didn’t listen well. Too many distractions. We didn’t make it through the first course. We made it through the second course, but she had three faults.

The following week we went back for our second trial. Now better prepared, we made it through the first run with a few faults, but she stayed with me. And the second run, we did great. She was attentive, I gave cues on time, no dropped bars and we finished the course. I was happy. But then I discovered we placed first in our grouping, and we received our first qualifying ribbon. Apparently, we can move up to the next level after three qualifying ribbons.

For me, agility with my dog is my hobby, my passion, and my stress reliever. And has helped me in my writing. 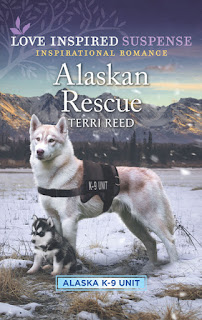 A mountain search-and-rescue mission turns into a fight for their lives.

Sent to find a wedding party that disappeared during a hike, Alaskan state trooper Hunter McCord and his K-9 partner, Juneau, discover bridesmaid Ariel Potter hanging from a cliff. But this was no accident—she was pushed—and her hiking companions are missing. Now it’s up to Hunter and Juneau to find them…and make sure whoever wants Ariel dead doesn’t finish the job.

I loved reading about your agility experiences, particularly since I have a Siberian husky that's taken his first agility class. He and I are both looking forward to the next session, where we get to tackle ramps and teeters.

Mary, you are going to have so much fun. Patience is key, for both of you. Enjoy!

I loved reading about your agility experiences with Audrey. It sounds like fun, plus keeping active, and sometimes that’s hard. I have a 14-1/2 year old chocolate lab, and I hope she lives forever. I cannot wait to read your new book.

I'm happy you and Aubrey have found a way to connect. Looking forward to the new book. Miss you and all the other RCRW group members.

Patty, we miss you as well!