Today we're joined by romantic comedy author Kay Keppler who grew up in a small town in northern Wisconsin but moved to California to escape the cold and snow. Now she lives in a drafty old house with dodgy plumbing and spends her time writing. Learn more about Kan and her books at her website and blog.

Several years ago, after celebrating a friend’s birthday in Las Vegas, I turned on the TV in my hotel room and watched a local news story. The reporter was standing in front of the county courthouse, where, among other services, people can get married or obtain a marriage license. Behind the reporter, at least a dozen people, some of them in costume, ran up and down the courthouse steps passing out advertising flyers for the wedding chapels.

I noticed one young woman in particular. She was probably in her twenties. She wore a 1950s retro costume: poodle skirt, saddle shoes, and a blouse with a Peter Pan collar. Her hair was in a ponytail. As she worked the stairs in the sweltering heat—it was July in Las Vegas, after all—her face was flushed, her blouse was damp, and she looked really, really miserable.

Who was this young woman? I wondered. She couldn’t intend to hold this thankless job for long. She had her whole life ahead of her. Why was she here? What did she want? What were her goals?

I knew this was a story in the making. But I didn’t know who this young woman was. She didn’t step out and reveal herself to me. None of the scenarios I imagined for her seemed quite right.

Time passed, but I never forgot her. And then one day, a couple of years later, I was at a writers’ workshop. The topic was character development. In our small groups, we brainstormed solutions for the problems we were having.

“I have this character who won’t leave me alone,” I said, talking about the young woman at the courthouse. “But I don’t know who she is, or what she wants, or how she got there.”

“She’s getting a master’s degree,” someone else suggested. “It’s part of her research.”

“Maybe,” said one participant hesitantly, “I think maybe she works for the CIA.”

And bingo! Just like that, all the pieces fell into place. I knew Phoebe’s name, how hard she’d worked to get to the CIA, how it all fell apart, and how determined she was to vindicate herself and return to the agency.

Phoebe’s arrival, fully formed in one bright second in that workshop, was a first for me. I’ve never had characters be so shrouded and then so fully revealed. I’m more grateful than I can say to that workshop participant who gave me that idea, the spark that led me to fully exploring this character and writing three books about her. (Skirting Danger is the first of a trilogy.)

I’ve had a blast writing Phoebe’s story, which is at heart a screwball romantic comedy. And maybe now that the trilogy is finished, I can finally get this character out of my head! 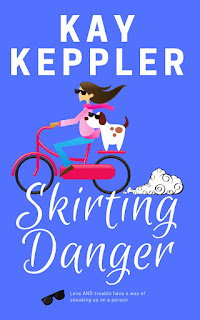 Suspended for a hunch gone wrong, CIA language analyst Phoebe Renfrew is desperate to get her job back. But when she uncovers a terrorist plot at a Las Vegas start-up owned by famed ex-quarterback Chase Bonaventure, no one will listen. Can Phoebe get Chase on her side--and thwart international disaster--before the All-Elvis Revue sings "Jailhouse Rock"?