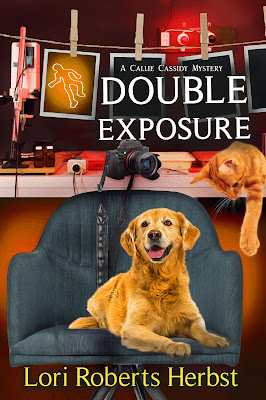 Lori Roberts Herbst spent much of her life writing, editing, and psychoanalyzing. Through thirty years of teaching journalism, advising newspaper and yearbook staffs, instructing budding photographers, and counseling teenagers, she still managed to hang on to a modicum of sanity. Then she abandoned all hope and began writing mysteries. Learn more about Lori and her books at her website.

Before becoming a cozy mystery author, I spent twenty-plus years teaching high school journalism. Hanging out in the photo lab with budding photographers occupied a big part of each day back then. I remember those hours fondly—so much so that a darkroom serves as a primary setting in my new release, Double Exposure, Book 2 in the Callie Cassidy Mystery series.

It is my opinion that as we age, the “nostalgia” lobe in our brain expands, so I realize I might be viewing those long-past darkroom days through rose-colored glasses (or crimson-colored safelights). Still, I recall that smelly, sticky, shadowy photo lab with affection. It was there I bestowed upon hundreds of teenagers the joy of watching images they had created come to life in a tray of developing fluid—a heady, almost spiritual event that lingers with most of us photographer-types forever. The experience is akin to giving birth—but without the contractions.

What a unique place a darkroom is. For a new photographer, it is a place to unearth your creative passions. No matter how many people are crammed inside, you encounter a warm sense of isolation and intimacy, as if you’re in a bunker, protected from the whirling chaos outside. The red glow softens the world’s hard edges. The odor of chemicals permeates every surface—including, after a time, you yourself—but you come to think of it as a pleasant aroma, much like your grandmother’s favorite perfume.

Even the terminology associated with a darkroom hints at comfort and enlightenment. You “enlarge” images. You “develop” pictures. You work beneath the gleam of “safelights.” You turn negatives into positives.

For a photographer who is also a control freak (and experience tells me that’s most of us), the darkroom furnishes the ultimate high. You determine every aspect of your finished product, from the photo’s size to the cropping to the tones. It’s a powerful marriage of art and craft, similar to writing a book.

We’ve all gone digital these days, and while I realize there are many advantages to that, the “old fogey” lobe in my brain (housed next to the nostalgia lobe) laments the darkroom’s decline. When I started writing the Callie Cassidy Mystery series, I saw a chance to remedy that, at least on a fictional scale. From her birth in my imagination, Callie was predestined to have a darkroom of her own, a spot where she could create and heal and grow.

And ultimately (spoiler alert), a place where she discovers a body.

Obviously, right? Because along with all its other features, a darkroom is a place where mystery lurks.

Former big-city photojournalist Callie Cassidy is finally feeling at home again in the mountainside village where she grew up. She’s bought her own townhouse, made friends, and rebooted a romantic relationship with her long-ago boyfriend. She even entered her lovable golden retriever and cantankerous tabby cat into the upcoming Fireweed Festival pet pageant. Best of all, her new photography business is poised on the precipice of success. So when a group of journalists from her old newspaper come to town for a retreat, she can’t wait to show off the gallery. The happy hour she throws goes off without a hitch—at least, that’s what Callie believes.

Then one of the reporters turns up dead—in Callie’s darkroom. Callie is certain she locked the place tight, especially in light of the recent vandalism. The murder thrusts the village’s shop owners into a tizzy. How can this be happening…again? They want the crime solved pronto—before the Chamber of Commerce cancels the festival and deprives them of a big chunk of seasonal income. Detective Raul Sanchez is on the case, but that doesn’t mean Callie won’t do a little snooping of her own. Meanwhile, she can’t shake the feeling that someone is watching her…Will Callie be able to expose the true killer—before time runs out?

Love this, Lori. I am looking forward to reading more about Callie and her sleuthing!

Thanks, Liz! This is such a fun gig!

I love finding the body in a darkroom! We had one in the basement of our house in Detroit (Troy, a suburb, actually). We didn't use it, except for storage, but that's what it was built for. I kept thinking I should take up real photography while we lived there. Good luck with the release!

The nostalgia lobe is always a nice place to visit. As you mentioned, many events memories seem more pleasant when remembered. I know next to nothing about dark room photography, so I'm looking forward to reading about it in your second book. Finding a body? Well, that's just part of the cozy mystery genre!

Kaye, a darkroom is a perfect place for a body—especially since it's a place Callie feels at home and comfortable. How jarring would that be! I hope if you decide to take up photography at some future date, you don't experience the same fate! Thanks for your good wishes—love your books!

Jane: Thanks for reading! Can't wait to read yours as well!