MYSTERY AUTHOR LESLEY A. DIEHL GAVE HER SLEUTH A GUN... 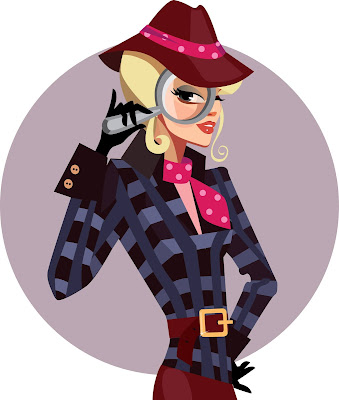 Lesley A. Diehl relies on her country roots and her training as a psychologist to concoct stories designed to make people laugh in the face of murder. “A good chuckle,” says Lesley,” keeps us emotionally well-oiled long into our old age.” She is the author of several cozy mystery series and numerous short stories. Learn more about her and her books and stories at her website.

Character Development in a Cozy Series: I gave her a gun, but she can’t shoot.

Here’s what I know about Eve Appel Egret’s character: She is the same spunky, in-your-face protagonist we met in the first of the Eve Apple Mysteries. Transplants from the Northeast and referred to as “Yankee gals” by the community, Eve and her friend Madeleine had opened a high fashion secondhand store in rural Florida when, on opening day, Eve found a dead body on their dressing room floor.

From that point (A Secondhand Murder) until the most recent episode of the series (Murder in the Family) Eve has snooped her way through illegal game hunters, members of the Russian mob, drug and human traffickers and just plain bad guys in the swamps of Florida. Along the way she’s eaten her skinny weight in barbeque ribs and cole slaw, drunk a lot of sweet tea and a bit of scotch and found the love of her life. And then in the middle of her exploits she became a private detective, a choice I never saw coming, but now see as the right thing for me to have done as the creator of this series.

Protagonists in my other series have been snoopy gals, but never as snoopy or as filled with bravado as Eve. So why morph her into a private eve? Because, simply put, she deserved it. Her favorite weapon against bad guys (and gals) was her stiletto heels, but how long could Eve use her mouth (also a lethal weapon) and footwear to fight off mobsters and killers, not to mention a few alligators along the way?

Eve’s mobster friend Nappi Napolitani (is he really a Family man or simply a family man?) has been impressed for years with Eve’s sharp mind and her ability to put together disparate clues to track down criminals. She’s depended upon him and her police detective friend Frida Martinez as back-up for her sometimes impulsive schemes to take out killers, perhaps counting on them to produce the firepower to overwhelm armed opponents. Lately Eve’s enemies have gone from evil guys trying to escape the law to evil guys wanting to take down the law. And her. And her family. And that makes Eve mad, really mad.

In addition, for a cozy writer like me, I have grown impatient with amateur sleuths who through the series, always run across dead bodies. How many corpses can one woman stumble over in her line of work as a consignment shop owner? I needed others in the community to encounter dead bodies and for Eve to intervene, as when she took her Yankee environmental stance against mud bog racing (for those unfamiliar with it, it tears up natural habitat and breeding grounds for many native species) or in Old Bones Never Die in which Eve challenges a land developer. Most of Eve’s cases don’t need her to find the bodies. The deaths have emerged from events in the community.

Because I kept throwing more and more dangers her way, I decided Eve needed more than a pair of stilettos and a smart mouth to get her out of jams. So, I apprenticed her (with the permission of her loving husband Sammie, her grandmother and other family members, somewhat reluctantly her best friend Madeleine, and half-heartedly police detective Frida Martinez) to the town’s only private detective, Crusty McNabb.

Due to retire soon, Crusty agreed to take on Eve, thinking he could assign her to sit surveillance on insurance fraud cases and keep her out of serious detective work, but he soon found Eve’s brilliance in solving cases an asset. And if her friends and family thought detective work would keep her out of trouble, they were, predictably, wrong. Eve still had her snoopy nature and her crime-solving nature, but she was missing one thing in her detective work: she needed a gun. A dangerous proposition for one as impetuous as our Eve. And, besides, Eve couldn’t hit a broad side of one of Florida’s famous mountains (translation, garbage dump hills).

“Open your eyes when you pull the trigger,” Crusty told her, but Eve couldn’t bring herself to shoot without closing her eyes.

So, I armed her, gave her detective training, and sent her to the shooting range, but I fear Eve is still the same gal she was when she moved to rural Florida. She has grown, of course, the kind of development a reader expects in a cozy heroine. No better at wielding lethal weapons, Eve now is mother to several children, which has taught her patience. She’s become a bit less in-your-face when confronting the people in her newly adopted rural Florida home, and she sometimes calls for help instead of going off like the Lone Ranger when she chases down criminals.

But she still remains the Eve who is fiercely loyal to friends, old or newly acquired, an attitude she expects others to exhibit. Woe to the person who violates that code of ethics. And, of course, she still wears her stiletto heels and her gelled, punked hair. Eve still doesn’t quite fit into the swamps of rural Florida. We don’t expect her to. And she still can’t shoot. 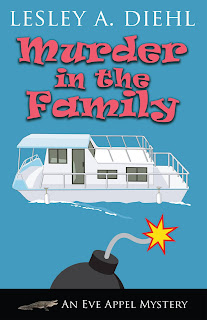 Murder in the Family

The past comes back seeking vengeance. To save her family and friends, Novice PI Eve Appel, pregnant with her second child, must outwit the bad guys in a final act of desperation, risking her life and that of the man she's asked to help her, her mob boss friend, Nappi.

I hope I've convinced your readers that my sleuth deserves more than a pair of stilettos to defend herself. Now, if she could only hit something with it!

We wish her luck, Lesley!