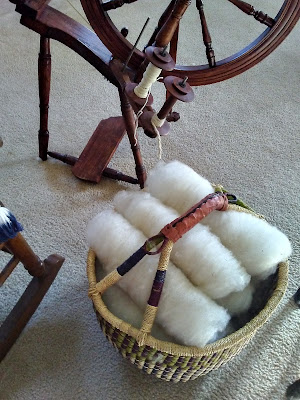 C.N. Hill is a married mom of five living in Georgia where she get much of her inspiration for her stories. Although relatively new to mystery, she’s published science fiction romance and Regency romance under other pen names. Learn more about her and her books at her website.

Although I am a writer first and foremost, I also spend my time as a fiber artist. I take fleece from sheep or alpaca, clean and card them, then spin them on my spinning wheel to make yarn. With the yarn, I knit or crochet sweaters, hats, blankets…you name it. The process is soothing and stimulating at the same time, and I find that if I am stuck in a story, a little fiber art does wonders to help me work it out. I can’t imagine writing without spinning or knitting, and there is always something on my wheel or on my needles. It makes sense, then, that I would incorporate these skills into my books somehow.

In The River House, the hero (Rob’s) mother, Helen, is also a fiber artist. She shows Jenna around her workroom and Jenna becomes enamored with it as well. In the book, Helen has gone so far as to acquire her own flock of sheep! Although not a primary character, she is important to the series and makes an appearance in all the books so far. In future books, Jenna will learn knitting and may delve deeper into fiber as the series goes along.

The River House begins with a murder, decades old and a haunted cabin on the edge of a river in the deep South. Jenna is a born medium who has restricted her talents to occasional ghost-hunting trips with her friend Rob and his spirit-seeking troop. When Rob’s cousin suspects a ghost in her newly acquired cabin, Rob brings Jenna on to investigate. What they find takes them on a wild ride to uncover the secrets of the River House and bring a killer to justice before they strike again. 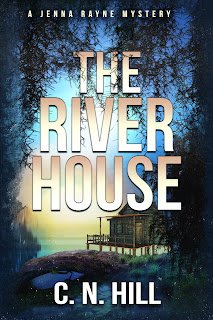 and a hidden killer.

The spirit world has always called to Jenna, despite her attempts to escape. College, career, these were the things that she had worked for…until the day an old friend asks for help.

Hidden in a stilted cabin on the river is a decades old murder with a ghost. Who it is and why it is there are secrets Jenna needs to uncover. With her friends Rob and Kerrie, Jenna begins to untangle the clues that will lead to a killer’s identity. But someone doesn’t want her talking to the spirits on the river, and accidents start to dog her heels. It soon becomes clear that the more she explores her talents, the more she endangers herself and those around her. Somehow they need to find the murderer before the murderer finds them.

I read “The River House” recently, almost without stopping. It strongly held my attention. I plan to read other Jenna Rayne mysteries.

I am so glad you enjoyed it!