Today we sit down for a chat with Buddy Banks, a Black Labrador/Rottweiler mix, from author Kassandra Lamb’s Marcia Banks and Buddy Cozy Mystery Series.

I was a happy puppy. My dog mom was a bit promiscuous. She was supposed to be producing only purebred Black Labradors. Her breeder was quite shocked when my siblings and I were born. Apparently, the neighbor’s Rottweiler had come visiting one night.

The breeder gave our litter to an agency that trains service dogs for veterans. My first human mom was the woman who fostered us and taught us our manners, until we were old enough to be trained as service dogs. That’s when I met Marcia Banks.

Life was good. Marcia’s very loving and it was fun to learn new things. But I was a little shocked when she took me to meet my veteran. I didn’t realize that I wasn’t going to live with her forever.

But my Marine was a good guy. I liked being useful, helping him deal with his PTSD. And his wife was very sweet, until she got herself killed. When my Marine was accused of her murder, I had to go live with Marcia again.

And as it turned out, I did end up living with her forever, and helping her solve mysteries and train more service dogs.

I’m pretty brave. I don’t bite but I will do most anything else to protect Marcia. Will, Marcia’s love interest, taught me some things that police dogs do. Like grabbing the arm of someone who’s holding a gun. I’ve had to do that way too often!

I’m getting old. I have gray hairs on my snout now! And I don’t have as much energy as I once did. It’s hard for me to keep up when helping Marcia train. She’s talking about training a new mentor dog to take my place, so I can retire. I’m not sure how I feel about that.

Well, this is a little strange, but it’s also fun. Our author had Marcia train me to act like someone’s out-of-control pet. When Marcia spins her finger around in a circle, I run up to the dog we’re training and try to get them to play with me.

It’s a test to see if they stay on task or do they let me distract them. We do it again a few times when we’re training the veteran who’s getting the dog, to see if the vet can keep the dog focused.

It’s fun because I get to act as crazy as I want, until Marcia claps her hands, and then I trot away, as calm as can be. The veterans often laugh when they see me shift gears so fast.

I don’t, but Marcia does sometimes. Lately they’ve been “discussing” whether or not it’s time to wind down our series (we have 12 books out now).

Marcia’s got mixed emotions about it. She loves investigating—that’s why she and Will are starting their own private detective agency—but she is getting tired of dealing with killers. She’s ready for tamer things, like insurance fraud cases. But she’s also a little afraid she’ll get bored with “tame” after a while.

Losing Marcia...and now she’s having a baby. I know she’ll want me to protect the baby, like I do her. But I’m not sure how to keep a tiny baby safe. What if I screw up and something happens?

A good nap after a training session.

Maybe the time with my Marine. Not the whole time, but toward the end. It was so sad. I try not to think about what happened.

Well, it used to be the lady who delivers our mail. She was afraid of dogs, but Dolly, the border collie we recently trained—she’s so sweet that she won the postmistress over. Now she even pets me sometimes. The postmistress, not Dolly...

That’s easy. The new puppy Marcia’s raising, who will eventually replace me as her mentor dog. If I were the pup, I’d get to live another whole dog-years lifetime with Marcia and her family.

Kassandra just celebrated her 70th birthday and her 10th anniversary as a published author. She says it’s time to slow down just a bit (I guess we’re both dealing with this getting-old business). It’s one of the reasons she’s winding down our series. She has started another one—a police procedural series about a female Chief of Police—and she says it’s a little much trying to produce at least one book per series each year.

Readers can learn more about her and her books at her website where there are also links to her social media. She also blogs at Misteriopress. 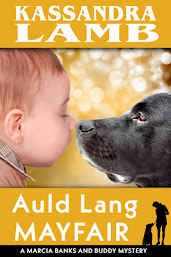 We have one more novella coming out, around the first of the year, called Auld Lang Mayfair. Kassandra says there’s going to be some drama regarding our friend Carla. She used to help Marcia and me train the dogs, but now she trains on her own and also works at the Mayfair Diner (and gives me meat scraps sometimes).

Our other friend, Edna Mayfair (she’s really old, in her 80s) is always trying to bring in more business, and especially tourists, to our small town. She’s building some new shops along Main Street, but this time her scheme to promote Mayfair may backfire.

We already have a cover for that last book. Isn't it cute? 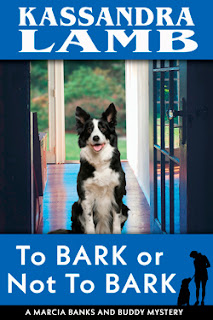 To Bark or Not to Bark

A Marcia Banks and Buddy Mystery, #12

Service dog trainer Marcia Banks tackles a locked room mystery in a haunted house, while training the recipient of her latest dog.

The border collie, Dolly has been trained to clear rooms for an agoraphobic Marine who was ambushed in a bombed-out building. But the phantom attackers in his psyche become the least of his troubles when Marcia finds his ex-wife’s corpse in his master bedroom, with the door bolted from the inside.

Was it suicide or murder? Marcia can’t see her client as a killer, but the local sheriff can.

Then the Marine reports hearing his ex calling for him to join her on the other side of the grave. Is his house really haunted, or is he hallucinating?

Bottom line: Marcia has lost a client to suicide before. She’s not going to lose another!

Hi, Anatasia. Thanks so much for having Buddy over today for his interview.

He's very grateful that he's finally getting a chance to tell folks how he feels about certain things.