Today marks the start of the Great Escapes Blog Tour for Guilty as Framed, the 11th book in the Anastasia Pollack Crafting Mysteries, featuring me, the reluctant amateur sleuth who sprang from the imagination of author Lois Winston. As part of the tour, there will be a Rafflecopter book giveaway. Three luck winners will receive a copy of Guilty as Framed, their choice of either paperback (U.S. residents only) or ebook. Enter at each stop along the tour to increase your odds of winning. Some of the tour stops will include posts from either me or my author Lois Winston. I’ll also be interviewed at Baroness Book Trove, and Christy’s Cozy Corner will feature a quick and easy craft project perfect for gift giving. (Believe it or not, the holidays are right around the corner.) Other tour stops will feature reviews or spotlights of the book.

I’m kicking off the tour today with a guest post at Jane Reads. There’s also a Spotlight of Guilty as Framed at Virginia Lee’s Blog. Come visit and don’t forget to enter the giveaway!

September 16 – I Read What You Write

September 21 – My Journey Back

September 22 – Escape With Dollycas Into A Good Book

September 24 – I'm All About Books 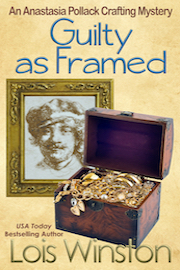 When an elderly man shows up at the home of reluctant amateur sleuth Anastasia Pollack, she’s drawn into the unsolved mystery of the greatest art heist in history.

Boston mob boss Cormac Murphy has recently been released from prison. He doesn’t believe Anastasia’s assertion that the man he’s looking for doesn’t live at her address and attempts to muscle his way into her home. His efforts are thwarted by Anastasia’s fiancé Zack Barnes.

A week later, a stolen SUV containing a dead body appears in Anastasia’s driveway. Anastasia believes Murphy is sending her a message. It’s only the first in a series of alarming incidents, including a mugging, a break-in, another murder, and the discovery of a cache of jewelry and an etching from the largest museum burglary in history.

But will Anastasia solve the mystery behind these shocking events before she falls victim to a couple of desperate thugs who will stop at nothing to get what they want?