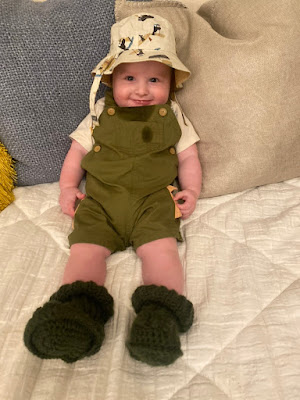 New York Times bestselling author Joanna Campbell Slan is a serial crafter, who likes to try a variety of creative hobbies in the evening after writing all day. She goofs up a lot, but mostly, she doesn’t care. Her latest book is Ship Wrecked, Book #8 in the Cara Mia Delgatto Mystery Series. Learn more about Joanna and her books at her website.

On March 23 of this year, I became a grandmother. Like generations of crafty grannies before me, I wanted to handmake “something” –I didn’t really care what—for Landon James Slan. It’s a universal truth among makers that with every bit of effort we put into a project is really an act of love. The memory box in my closet still contains cross-stitched drawstring purses my late grandmother made for me. When I run a fingertip over the threaded pattern, I can close my eyes and literally feel her love. I wanted my grandson to have that emotional touchpoint, too. But what to make a little boy?

That was the answer!

Now if I was an ace crochet maven like Bippy, a character in my Cara Mia Delgatto Mystery Series, I could have whipped out a pair in nothing flat. But I’m not that experienced. Years ago, I attended a beginning crochet class at a yarn store. Booties were not included.

However, Google is a crafter’s best friend. By googling “crochet patterns for booties,” I found a plethora of options. The first pair claimed to be super simple. Basically, you made a T-shape and lapped over the sides to form a shoe. The result was lamentable, and they didn’t stay on.

Back to Google. I found a Baby-Bean Booties pattern by Brenda K. B. Anderson.

The Baby-Bean Booties pattern comes with a video tutorial. Yes, the pattern was more complicated than the cross-over pair I first made, but these new booties were designed to stay on. Babies are terrific at kicking, and Landon is no exception. Baby-Bean Booties’ tall, stretchy cuff helps them to cling to those chubby little calves.

The pattern is well presented. The instructions are clear. By watching the video, I was able to work through any hiccups. Using yarn that I already had, I made my first pair. They fit Landon perfectly! Since then, I’ve completed four pairs—teal, blue, gray, and red. There’s a real value to recreating the same pattern, over and over. Each time I approach the project, my confidence grows and my skills improve. Of course, I also get faster.

But I like changing things up, and a pair of Santa Claus boots would be adorable for the holidays. The idea of a fuzzy cuff thrilled me. Unfortunately, crocheting with fluffy yarn is a nightmare. Once again, I turned to Google for advice. Two tidbits made a lot of sense: 1.) pair the fluffy yarn with regular yarn so you can see/find your stitches and

2.) use a larger size crochet hook.

I set out to conquer the fur-trimmed booty.

The cuff on the Baby-Bean Booties is worked sideways in rows, starting with a chain of 19, putting the hook in the back loop of the stitch to give it stretch, and then slip-stitching the sides together to form a tube. Try as I might, I couldn’t FIND the back post of the stitches when I switched to the fuzzy yarn. After a frustrating evening, I asked myself, “What CAN I do? What do I know how to do already?”

Time for a modification. With the black yarn. I crocheted a cuff that was half the size required, a chain of 9 instead of 19, but still making 26 rows. As directed, I slip-stitched the piece together to make the (shorter) tube and continued with the body of the shoe. Once I had the shoe and the stretchy top, I switched to the fuzzy-and-plain white yarn and increased the hook one size. Using this new combination, I worked into the top of the existing black cuff with a single crochet stitch. I kept going until I had crocheted an additional white, fuzzy band the same size as the existing black cuff. 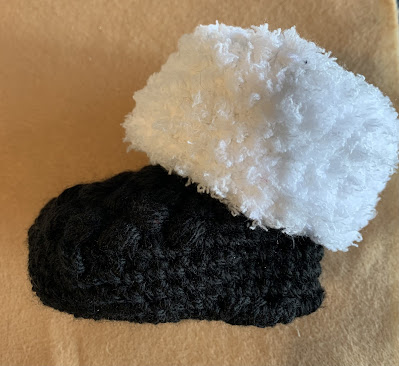 Lessons learned: Don’t give up. Think up a work-around. Take a break when you get too frustrated. Find help with Google. And keep on making booties. 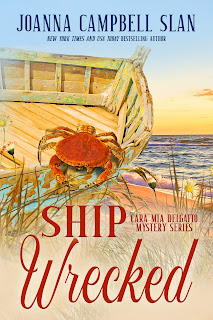 Cara Mia Delgatto is doing historical research when she visits the House of Refuge, a way station for shipwrecked sailors, on Hutchinson’s Island, Florida. But Cara gets a dose of hysterical reality when another visitor is stabbed—and she’s called upon to administer first aid. The subsequent death of the victim weighs heavily on Cara. The police are stymied, but Cara is spunky and determined. Until she finds out whodunnit—and why—she’s haunted by the senseless murder.

Congratulations on your upcoming book release. Love the booties and Landon is a cutie.

Booties and socks are so difficult. They turned out fabulous.

Thanks so much, Dru!

These were not as challenging as they look. Thanks for the compliment.