Today’s Book Club Friday guest author is L.J. Sellers. L.J. is an award-winning journalist and the author of the Detective Jackson mystery/suspense series based in Eugene, OR. The first two books, THE SEX CLUB and SECRETS TO DIE FOR, have been highly praised. The third book in the series, THRILLED TO DEATH, was released in August. Her next Jackson novel, PASSIONS OF THE DEAD, will be published in 2011. L.J. also has two standalone thrillers, THE SUICIDE EFFECT was just released for Kindle and will be available in print soon. THE BABY THIEF will be released soon. When not plotting murders, L.J. enjoys performing standup comedy, cycling, social networking, attending mystery conferences, and editing fiction manuscripts. She’s also been known to jump out of airplanes. You can read more about L.J. at her website. -- AP 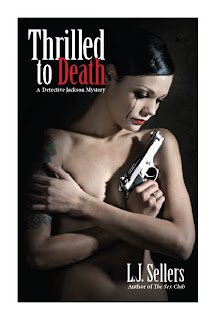 Thank you, Anastasia. I may seem like a new novelist on the scene, but the truth is I’ve always been a writer. I earned a journalism degree soon out of high school, and I’ve worked most of my life as a newspaper journalist and magazine editor.
I’ve always loved reading fiction too. So it was inevitable that I would eventually combine those passions and write crime fiction. I started out writing thrillers, then eventually got the idea for THE SEX CLUB, the first in my series. The story required two main characters, one of which was a homicide detective. It seemed logical to create a character I could come back to in future stories, one that I liked and respected enough to keep writing about if readers liked him and wanted more.
That’s why Detective Jackson is not a typical alcoholic, depressed, burnt-out cop like you see in many police procedurals. He’s a devoted father, who struggles to squeeze in time with his young teenage daughter when he’s working round the clock on hard-to-solve homicides. And I always give him challenging cases! In his free time, Jackson restores old cars and builds trikes with his daughter. He’s a composite of two homicide detectives I interviewed, with some of my husband thrown in.
Jackson’s main strengths are his integrity and his compassion. As a twenty-year police officer, he struggles to maintain both. In his line of work, with escalating violence, budget cuts, and a revolving-door jail, it would be easy for him to take short cuts to get the job done, and it would be natural to become cynical. He resists both. As a homicide detective who encounters troubled people all the time, his compassion can also be a weakness.
It’s challenging to keep a series character interesting, with subtle evolutions, while not making major changes that readers will object to. Fortunately, my plots have provided organic ways for Jackson to grow personally as he works through the case complications and examines his own perceptions. Several readers have commented that they love the way Jackson processes information and comes to realizations. 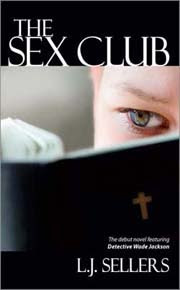 People always want to know where I get my unique ideas. I have a busy brain that’s always looking at situations and asking questions. My plots are usually a combination of some real crime I’ve read about that got stuck in my head and a social/political issue that I feel passionately about. I bounce the two things off each other, trying to see how I can make them fit together.
My newest novel, releasing this month, is more of a pure thriller, and the plot came out of the question: What happens to all the women who disappear? There are so many possibilities.

Here’s the back cover copy for THRILLED TO DEATH: Monday morning, a young mother disappears after a doctor’s appointment. Monday evening, a young socialite leaves a risqué lounge and never makes it home. Detective Jackson lands both cases, but at first he can’t find signs of foul play. When the socialite turns up dead, his investigation uncovers her dirty secrets, which complicates everything.
The case runs into even bigger trouble with a suspect who hasn’t left his house in a year. Jackson must push all the boundaries to find the connection and answer the question: Where is the other missing woman?
It’s impossible to discuss the development of this plot without revealing several of the twists. And this story has plenty of surprises! Mystery reviewer Jacks Quick says, “Ms. Sellers has a delightfully twisted mind and the talent to take her unsuspecting readers down trails that fork and bend and curve and twist … You are gonna love this one.” (And I love Jack Quick for saying that. )
Thanks for stopping by, L.J.!

L.J. is giving away a copy of THE SEX CLUB to one lucky person who posts a comment to the blog this week. So if you want to be eligible and haven’t posted a comment yet, now’s your chance. And don’t forget to stop back tomorrow to see who the lucky winner is. -- AP
Posted by ANASTASIA POLLACK at Friday, September 03, 2010

I loved your description of the main character, Detective Jackson. He sounds like a man you can admire. Interesting too that you developed your plot for THRILLED TO DEATH out of a single unanswered question. Great approach!

Sounds intriguing, I'll be stopping at the book store this afternoon to find myself a new book for the weekend.

Thanks, Jill and Crystal, for stopping in. I'm having a blast writing this series and working on a fifth Jackson story now.
L.J.

Detective Jackson sounds like a character I would really like. It would be nice to read about a lead character that isn't the typical burnt-out, flawed detective.

Thanks to LJ Sellers for joining us today for Book Club Friday. It's not too late to post a comment to be entered into the drawing for LJ's THE SEX CLUB. Stop back tomorrow to find out who the lucky winner is.