Our Book Club Friday guest today is medical suspense author CJ Lyons. As a pediatric ER doctor, CJ Lyons has lived the life she writes about.  In addition to being an award-winning medical suspense author, CJ is a nationally known presenter and keynote speaker.
Her first novel, LIFELINES (Berkley, March 2008), received praise as a "breathtakingly fast-paced medical thriller" from Publishers Weekly, was reviewed favorably by the Baltimore Sun and Newsday, named a Top Pick by Romantic Times Book Review Magazine, and became a National Bestseller.  CRITICAL CONDITION, the final book in her award-winning, critically acclaimed Angels of Mercy series was just released.  CJ’s newest project is as co-author of a new suspense series with Erin Brockovich.  To learn more about CJ and her work, visit her website.
CJ has graciously offered a copy of URGENT CARE, the book that sets up CRITICAL CONDITION, to one of our readers who posts a comment to the blog this week. -- AP 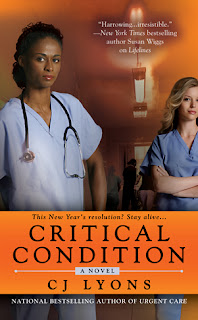 STILETTO HEELS OR COMFY SLIPPERS?
The past  few years I've been privileged to judge several contests: the Ritas, Daphne published, the Golden Heart and the Thrillers. That adds up to almost 500 books I've read searching for excellence in fiction.
Did I find it?  Yes, but it was few and far between.
I don't think I'm an overly-harsh judge.  But maybe I've read too much?  So many of the books blend together—flat, cardboard characters following clichéd, over done plots to the point where I have to double check my score sheet.  Did I read this book already?
No, it's just like all the others is all…..
Many of these books are by multi-published best selling authors.  Some broke new ground with their early books but now continue to follow in their own footsteps.
I can understand that—if you find what works for you and have a large following of fans wanting you to do the same old thing and paying you lots of money for it, who could resist?
And, many readers DO want the "same thing, just different". They demand it, complaining if "their" author tries a new direction. They like having expectations fulfilled, rather than being surprised.  Reading is a comfortable escape for them, not a challenge or adventure.
I confess, I'm more of a thrill-seeker when I choose my books.  Maybe because I now have so little time to read, every book I do finish must promise something new and exciting.  Many don't deliver on their initial promise and end up being unfinished, but that's fodder for another post! 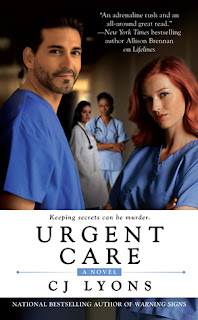 I think there's a time and place for both kinds of books.  And bravo to everyone who is reading instead of watching TV or living their lives on-line!!
But as a writer, it's scary to think about.  Your gut tells you to go one way, your brain tells you to stick to "what works", your heart wants to head in a totally other direction…what to do?
My last book in the Angels of Mercy series is out December 7th.  With each book, I've upped the bar as far as intensity and giving the reader an adrenalin rush of a thrill ride.  Book #1, LIFELINES, was pretty much pure thriller with increasing stakes until the entire city of Pittsburgh was at risk.
Book #2, WARNING SIGNS,  was a different kind of challenge: combining a coming of age story about a medical student suffering from mysterious symptoms with the whodunnit mystery behind the deadly symptoms.
URGENT CARE, book #3, was a true book of my heart and the toughest to write--in it, I explore the psychological effects of surviving a trauma.  It's a dark, gritty suspense, very emotionally honest.
So for CRITICAL CONDITION, the finale of the Angels' quadrilogy, I wanted to go back to the intense pacing of the first book.  Only I set myself an even bigger challenge--instead of taking place over 4 days, this book takes place over four HOURS!
Yep, you got it--you'll pretty much read this book in real time--which means juggling not only four characters and their story arcs but down to the second timing between each scene.
Plus, after the dark intensity of URGENT CARE, I wanted to give readers a bit of a smile, so there are all sorts of unexpected happenings (unexpected even to me, lol!  Don't you love it when that happens; you're just writing along and you surprise even yourself?  Talk about chaos!) and fun twists and turns.
But….there's always a but, isn't there?...will CRITICAL CONDITION excite and satisfy my readers as much as it did me? It's fresh, different, pushing all the boundaries…but is that what readers want?
What do you want from a book?  A comfortable, familiar sweater that you know will fit perfectly?
Or a snazzy, new dress that may itch at first but gives you that feeling of ohlala?
Thanks so much for stopping by, CJ! So readers, which are you? A comfortable sweater or a snazzy new dress? Don’t forget to post a comment to be entered in the drawing for URGENT CARE, and check back tomorrow to find out if you’re the lucky winner. -- AP
Posted by ANASTASIA POLLACK at Thursday, December 09, 2010

I like the comfy sweater, but I'm always delighted to find the snazzy new dress. That's why I search for new authors. It's like finding a jewel among the precious stones.

Marilynne! I love the way you think!!! Thanks so much for sharing!
CJ

I guess I want a mixture of both. I love series and love getting deeper and deeper into the characters' lives with each book, but I don't want to feel I'm reading the same book over and over either.

As a writer, I have to confess that I love trying out different things and always wonder whether, if I do manage to get published, I would have to stick to "same old, same old" for the rest of my days. I would sincerely hope not!

Sounds like you've found what works for you, CJ, and I would love to win a free copy of your book!

I'm one that always likes a challenge. Which is probably why I started writing mainstream historical fiction. I'm know for writing gay crime fiction but I wanted to break out and do something different. So I've been heavily researching both Prohibition and the history of Los Angeles and will be writing some novels dealing with that. It can be scary to step outside the familiar but I think it's worth it.

While I love getting deeper into series, I find that often they have to keep getting more and more unrealistic until I just quit reading them because I don't believe the situations are even possible.

Totally agree that some writers keep to a tried and true pattern for all of their books. I know that many readers love this, but, like C.J., I'm not one of them. For a novel to hold my interest it needs originality, even for an ongoing character. Show me evolution of character and personal growth and I'll find time to read your books.

I really enjoy being surprised in a book, whether with a new author or an old series. If I want the cozy sweater experience I sometimes reread a favorite, knowing that it became a favorite because it initially surprised.

Thanks, Nancy--not sure if it will always work for me, I get bored easily, so am always trying something new, lol!

I agree, Pat! And that's a fascinating time period to be working in. Good luck!

Sounds like we're kindred spirits, Anon!!! Thanks for stopping by!

Shirley, I always figure that if I surprise myself, I'll also surprise a reader...one of the reasons why I don't plot ahead of time.

I'm with you, Janet--have dropped a few series that have "jumped the shark"...

I like to read something new, too. But sometimes, new seems to mean unrealistic or unbelievable (especially in the paranormal genres). There's a fine line between the tried-and-true and "new" to make reading an awesome experience, but darn if I know where it is.

Cris, I agree--that's the reason why there's very little paranormal that I read...but when I do find one that works, oh boy, I love it!

I would choose the comfy sweather (or even better a soft fuzzy comfy bathrobe) but in a book to read I would want the snazzy new dress.

Lifelines was a great book & now I am looking forward to the two new books in the series.

Thanks, Helen! There are actually three books after LIFELINES: Warning Signs (which won the Daphne du Maurier award for Excellence in Mystery/Suspense, btw!), Urgent Care, and the new one, Critical Condition.
Enjoy!

I think it's a question of trust. If you know and like the author's work, you're more likely to go along for the ride, even if this book promises a slightly different ride. I do think that writers who become brands run the risk of doing the same old thing, either because their readers (or maybe their publishers) expect it. In your case, CJ, I'd definitely jump on for any ride you decide to create!

By the way, I wonder if you could answer a question. Which contest do you mean when you say "Thrillers"? As Lois knows, I am looking for that first opening for my work...Thanks for the info, and thanks for the post!

Hi Jenny! I was talking about the annual Thrillers Awards from the International Thriller Writers (www.thrillerwriters.org)

Thanks, CJ! Will check it out--

I want to thank CJ for stopping by today as our Book Club Friday guest. Don't forget to check back Sunday to see who wins a copy of Urgent Care.

Thanks for having me, Anastasia!!!