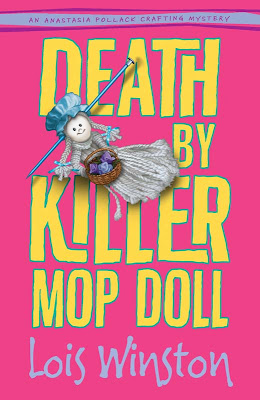 As promised last week, author Lois Winston returns today to answer that burning question on everyone’s mind: what the heck is a mop doll? -- AP

Thank you, Anastasia. Death By Killer Mop Doll will be released next week, and the question I’m most frequently asked is, as you so delicately put it, what the heck is a mop doll.

Well, I am a delicate person.

Of course. Now let’s get on with the topic of the day. We have readers staring at their monitors, holding their breath in anticipation.

All right. Without further ado, a mop doll is a doll crafted from a cotton string mop, those mops you often see janitors using in office buildings.

Hold on! These dolls are made from unused string mops, ones that have never come in contact with a bucket of Mr. Clean.
I knew that. I was just stating what our readers were probably thinking.
Right. As you know, Anastasia, crafters are very resourceful people. We’re constantly finding new uses for readily available materials, and cotton string mops are readily available in just about any hardware store, home store, or supermarket.

At some point in the late 1980’s, these dolls started popping up at crafts fairs, first in California, then spreading throughout the country. Suddenly, mop dolls were all the rage, and mop head manufacturers were selling tens of thousands of mop heads to craft stores. Like all trends, though, the mop doll craze eventually went the way of the pet rock -- until now, thanks to you and a certain assistant producer you meet in your latest adventure, Death By Killer Mop Doll. 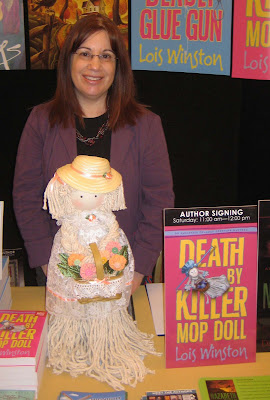 The picture shows me with a mop doll at the Bouchercon mystery convention in St. Louis this past September (I’m the one who looks like she’s fighting a cold.)

Definitely not the most flattering picture you’ve ever taken, dear.

I know, but it’s the one that best showcases the mop doll.

Speaking of conventions, you have some exciting news for anyone who will be attending the American Library Association Mid-Winter conference in Dallas, don’t you?

That’s right. For anyone attending the conference (January 20-24 at the Dallas Convention Center), Midnight Ink will be raffling off the hand-crafted mop doll shown in the photo during the opening reception Friday evening, January 20th at 7pm. Librarians and reviewers in attendance are encouraged to stop by the Midnight Ink booth #1459 to register for the drawing. In addition, signed copies of Assault With a Deadly Glue Gun and Death By Killer Mop Doll will also be raffled off.

And as mentioned last week, Lois will be going on a virtual blog tour throughout January to promote Death By Killer Mop Doll. As part of the tour, she’ll be giving away 5 copies of the book. To enter the drawing, just post a comment to any of the blogs on the tour or to today’s post. You can find the schedule for the blog tour on the sidebar to the right.

In addition, Lois will also be giving away 3 copies of Death By Killer Mop Doll on Goodreads.

Read more about Lois and an excerpt of Death By Killer Mop Doll at her website. -- AP
Posted by ANASTASIA POLLACK at Thursday, December 29, 2011

Let me know if you come Cleveland's way!

Hooray for mop dolls. Please enter me into your book giveaway item thing.

Kelly, I'll be in Cleveland for Bouchercon in Oct. if you'll be there, I'd love to meet you.

Carol-Lynn, thanks for the mop doll shout out!

I really enjoyed "Assault with a Deadly Glue Gun." Our library has "Death By Killer Mop Doll" on order, but I would love to win a copy!

That Anastasia I can see how she might :cough: think she's delicate:) What a wonderful interview. And you look fine, Lois, Anastasia, behave Best wishes on Death by Killer Mop Doll, Lois! Can't wait to read it!

I had no clue what I mop doll was and have followed you for months and was wondering when you were going to tell us! That is the cutest doll EVER. I even want one and I'm not a kid.
Good luck on your blog tour. I start mine on January 9th through April 9th! Ought to be fun for us!
Patti

After ''Assault with a Deadly Glue Gun'' sparked homicidal maniacs to use the previously benign craft appliances for murder, we can only hope the same doesn't happen with those adorable mop dolls as Lois's new book debuts. Keep your eyes out for maniacs wielding mop dolls, folks!
Seriously, best of luck on the new one, Lois, and great interview, ''Anastasia'' ;-)

That mop doll is special and adorable. love it. So unique.

What a great doll. I would love that for my grandaughter. So sweet. Many thanks for your great post.

Thanks, Barbara! So glad you enjoyed Glue Gun. You're entered in the drawing.

Hey, Donnell, you know about those characters of ours. They always have opinions. ;-)

Debra, crooks might really try to clean up with mop dolls. Guess we'll have to wait to see.

Petite and traveller, you can find directions for making a mop doll in Death By Killer Mop Doll. It's really easy.

I want that doll. I can't believe someone would use her as a weapon but mystery writers are a "crafty" bunch.

I loved ASSAULT WITH A DEADLY GLUE GUN and can't wait for this sequel. We'd love to have you join us at Left Coast Crime in Sacramento but if your schedule is too busy, how about donating one of those dolls and your book for our silent auction. I visualize all 500 plus attendees fighting over it!

Who would have thought to use a mop to make such a cute doll. Definitely thinking outside the box. Looking forward to your new book. "Assault with a Deadly Glue Gun" was outstanding!

A little reading of history would show your mop doll friend that "old" wasn't useless (thank you bleach).

Jane and Liz, thanks!

In nearly years in the library profession, I never went to Mid-Winter. I went to the national ALA conference about 6 times and the state conference maybe two dozen.
I don't remember ever seeing a cool raffle prize like this. My wife would love it. But if we win the book instead, that's cool. : )

Uh, that was supposed to say, "nearly 30 years"

Having chuckled my way through "Assault with a Deadly Glue Gun," I'm looking forward to reading "Death By Killer Mop Doll" and hosting you as a blogger at the end of January on "It's Not Always A Mystery"-dhg

Having chuckled my way through "Assault with a Deadly Glue Gun," I'm looking forward to reading "Death By Killer Mop Doll" and hosting you as a blogger at the end of January on "It's Not Always A Mystery"-dhg

Jeff, sorry you won't be able to attend ALA and enter the drawing for the mop doll.

Debra, so glad you enjoyed Glue Gun! I'm looking forward to being your guest.

That sweet looking doll couldn't kill anybody. Perhaps it was another, mean, wicked doll who dunnit.

I've never seen one, Lois, but the one in the photo is lovely.

Mop Dolls rock! You two look great in the photo. No need to enter me in the drawing b/c my copy should be arriving Jan. 3rd (yay!). Happy New Year, everyone!!

I cannot wait to get your next book but would be better would be to win a signed copy :) So glad I found Death By a Glue Gun and followed the link to this blog.

Kim, check out the blog tour on the side bar. Every time you post a comment to one of the guest blogs, you're entered to win one of 5 signed copies I'm giving away.

I had no clue what I mop doll was and have followed you for months and was wondering when you were going to tell us! That is the cutest doll EVER. I even want one and I'm not a kid.
string mop

Thanks so much, John!