Kathleen Kaska writes both the Sydney Lockhart Hotel Mystery series and the Classic Triviography Mystery Series. Her Sherlock Holmes and Alfred Hitchcock trivia books were finalists for the 2013 EPIC Award in nonfiction. Her nonfiction book, The Man Who Saved the Whooping Crane: The Robert Porter Allen Story (University Press of Florida), has been nominated for the George Perkins Marsh Award for environmental history. Learn more about Kathleen and her books at her website and blog.

Today Kathleen joins us to talk about food in mysteries and offers a recipe for Pineapple Upside-Down Cake.

In my Sydney Lockhart Hotel Mystery Series, I like to put my characters in the most unlikely situations to see what will happen. My protagonist, Sydney Lockhart, is a reporter cum PI, so the situations she encounters are expectantly unusual and odd. In fact, she thrives on pushing the envelope. Her sidekick and pain-in-the-butt cousin, Ruth, on the other hand, thrives on her luxurious lifestyle of fashion, self-indulgence, and newfound wealth. She likes it that way and expects others to accommodate her every whim. So, when she ends up kidnapped by a crazy Cajun and is forced to change out of her Chanel suit into an oil worker’s duds, or is forced to wear a flea-bitten garment from a secondhand store in order to pass herself off as a vamp, a good laugh ensues.

In my next mystery, Murder at the Driskill (available early 2014), we (Sydney and I) decide to put Ruth in the kitchen, but not just any kitchen. In order to help solve a murder at the hotel, Ruth needs to go undercover in the hotel’s restaurant as a prep chef. The trouble is, Ruth’s prowess in food prep is limited to arranging vanilla wafers on a platter. In order to prepare for her assignment, Ruth purchases three cookbooks, one of which is entitled Cooking While Wearing Your Mink.

Food has always played a part in my mysteries, but throwing Ruth into the culinary world got me thinking about specific dishes that were popular in the 1950s, the decade in which my stories are set. Although I grew up in the fifties, our family meals were not prepared with the help of Betty Crocker. With a big garden in the background, a dad who butchered and cured his own meats, and a mom who just knew how to cook, fad dishes did not often find their way onto our table, except for one: the venerable pineapple upside-down cake. So, with the oddity of baking a cake upside down in a skillet on the stovetop, I figured this dish, with Ruth’s personal interpretation, was bound to add that element of humor and provide her the opportunity to turn the kitchen on its ear. Stay tuned for Murder at the Driskill, to find out if Ruth pulls off her deception or creates a disaster in the haute restaurant in the Driskill Hotel in Austin, Texas.

In the meantime, you can find out what a hangover does to Ruth’s appetite in my latest mystery, Murder at the Galvez.

The pineapple upside-down cake has been around since the turn of the twentieth century, and in a more primitive fashion, the Middle Ages. Most recipes call for baking the cake in an oven, but I prefer the stovetop method because that’s how my mother made it. So, here goes:

Have the cake mix ready before you begin. Combine dry ingredients in mixing a bowl.
In a separate bowl, beat eggs; add milk and butter.  Mix well into dry ingredients. Set aside.

Prepare topping in the skillet by melting butter and brown sugar over medium heat. Stir until evenly spread. Line the bottom of the skillet with one layer of pineapple slices. Add ½ cherry in the hole of each slice. Pour cake mixture over topping.

Cover and cook over low heat until done (approximately 35 minutes or when cake pulls away from the side of the skillet). Uncover, lower heat, and let set for 5 minutes.

Place a round platter or large plate over the pan and invert. Do this over the sink in case some hot butter seeps out. Serve plain or with a scoop of vanilla ice cream. 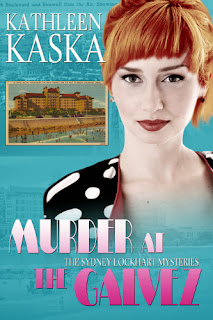 Murder at the Galvez
Another hotel; another murder; another family crisis; another attempt on reporter Sydney Lockhart’s life. When she discovers that the unsolved murder of her grandfather eighteen years earlier is linked to a string of killings in Galveston, Texas, Sydney finds herself smack dab in the middle of Murder at the Galvez.

Thanks for having me as a guest today, Lois. This one was such fun to write.

Great interview, Lois and Kathleen.
Kathleen, that cake looks yummy! I must try making it soon, along with reading your mysteries.

Hi Marilyn, I know what you mean; it's hard to look at that cake photo and not want to take a bite. It's a good thing I have a full day scheduled today, otherwise I might be in the kitchen.

Going to have to check this out. I love mysteries.

Hope you enjoy the series, Victoria.

I l-o-v-e Pineapple Upside Down cake. Thanks for sharing the recipe, Ladies!