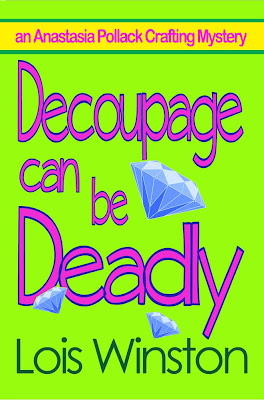 It's always exciting to be able to announce the arrival of a new Anastasia Pollack Crafting Mystery. Author Lois Winston (she who writes those books featuring yours truly) is here today to talk about the latest trouble she's gotten me into. Of course I'm biased, but I think it's the best one yet.

There’s a trend in historical fiction to incorporate real people—both famous and infamous—into plots. Sometimes these characters are secondary to the story; other times they play an integral role in the narrative. The first book I ever came across to do this was E.L. Doctorow’s Ragtime. Great book! Great musical! I highly recommend both.

In contemporary fiction most authors shy away from using real people for fear of lawsuits, limiting references to such things as making comparisons about a character’s resemblance to a celebrity. It’s a great way to create a visual image without sticking a paragraph of boring head-to-toe description into a scene. In the Anastasia Pollack Crafting Mystery series I’ve described Zack Barnes, Anastasia’s love interest, as “a guy who looks like Pierce Brosnan, George Clooney, Patrick Dempsey, and Antonio Bandares all contributed to his gene pool.” I don’t think I have to worry about receiving letters from any of their attorneys.

However, because Anastasia is a crafts editor for a women’s magazine, I’m always on the lookout for new trends, both in crafts and in pop culture in general, to incorporate into my novels—in other words, the kind of things you’d find featured in the magazines for sale at the supermarket checkout. Sometimes I hit pay dirt.

Such was the case when I learned of the recent fad of Vajazzling. Here was something not only crafty but both fashion and beauty-related. It ticked off three of the monthly features showcased at the magazine where Anastasia works. Although, note that I chose to showcase the craft of decoupage and not Vajazzling in the title. Decoupage is also the craft that I’ve included for projects in the book. Want to know why? Read the first chapter over at my website.
Decoupage Can Be Deadly
Anastasia and her fellow American Woman editors are steaming mad when minutes before the opening of a consumer show, they discover half their booth usurped by Bling!, their publisher’s newest magazine. CEO Alfred Gruenwald is sporting new arm candy—rapper-turned-entrepreneur and Bling! executive editor, the first-name-only Philomena. During the consumer show, Gruenwald’s wife serves Philomena with an alienation of affection lawsuit, but Philomena doesn’t live long enough to make an appearance in court. She’s found dead days later, stuffed in the shipping case that held Anastasia’s decoupage crafts. When Gruenwald makes cash-strapped Anastasia an offer she can’t refuse, she wonders, does he really want to find Philomena’s killer or is he harboring a hidden agenda?

Decoupage Can Be Deadly is now available in both print and as an ebook. Print copies can be purchased through Amazon or ordered from any bookseller. Ebooks are available from the following vendors:

Yes, you always walk a fine line between trying to sound current and not wanting the references to sound dated in ten years (or less). My new book features a rock band, and that's certainly a business where things change every day. Where I made references to rock music, I tried to deal with performers and trends that have been around long enough to become household names. But my main characters range from their late 20s through mid-30s, and it was a challenge to reflect what their tastes might be without using terms that could be "out" tomorrow.

Sorry, I didn't mean to sign on as "Anonymous"!

Not a problem, E.F.! All comments welcome, whether anonymous or not. And I agree about not wanting your book to sound dated a few years from now. That's why it's so important to include some sort of explanation, as I do with Vajazzling. No matter when you read the book, you'll understand what it is because one character explains the process to the other characters.

I once read a book where the author referenced a character in a TV show that was cancelled after half a dozen episodes. I doubt many people got the reference. I did only because I was one of the few people who had watched the show.