#HACK OF THE DAY--CLEVER USES FOR WHITE BREAD 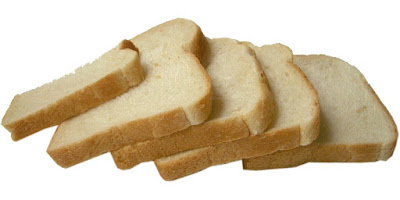 “It’s the greatest thing since sliced bread!” Who hasn’t heard that expression? It’s been around since the automatic commercial loaf slicer was invented and unveiled by Otto Rohwedder in Missouri in 1928. (Rohwedder actually created his prototype in 1917, but a fire destroyed it and all his blueprints. It took him another eleven years to rebuild the machine and convince a friend to use it at his baking company.)

So that’s where the expression comes from, but let’s move on to some amazing hacks for sliced white bread that don’t involve peanut butter and jelly or ham and cheese. Here are some ways a slice of bread can help make your life easier.

1. Soak up the oil that rises to the surface when cooking soup, sauce, stew, or pot roast by placing a slice of stale white bread on top of the food while it’s still in the pot. Let the bread sit there for a few seconds to absorb the oil, then discard it. You’ll wind up with a much healthier dish.

2. Ever break a glass or mirror and find it next to impossible to sweep up all those miniscule shards and slivers? Gently press a slice of bread onto the surface where the glass broke. The bread will pick up the glass you don’t see. Carefully discard the bread.

3. Do you find it difficult to clean your coffee grinder? Bread to the rescue once again! Place a few small chunks of stale bread in the grinder. Pulse a few times, then dump out the contents. The coffee grounds will stick to the breadcrumbs.

4. Air fresheners don’t always work to rid nasty smells from your kitchen trashcan. Often they just mask the smells. If you keep your can under the sink, the smell can also migrate to the cabinets on either side of the sink. Soak a slice of bread in vinegar. Place the bread on a paper towel inside the trashcan or on a plate in your other cabinets. Leave overnight. The vinegar will neutralize the odors.

5. Curious fingers often leave fingerprints and smudges on the photos in your albums and scrapbooks. Wad up a ball of stale bread and swipe over the photos to absorb the oils without scratching the photos.
Posted by ANASTASIA POLLACK at Wednesday, November 16, 2016

Seriously awesome. Does this work with whole grain breads? We ditched the Wonder Bread years ago.

I mash up the bread and put it in the outside bird feeder. Once in a while, I'm sure my feathered friends get tired of bird seed, and I give them something different. Thanks for the post.

Anne, I can't say for sure, but my guess is that it probably would. You'd have to give it a try.

Angela, if I did that, I'd have even more squirrels than I do now!