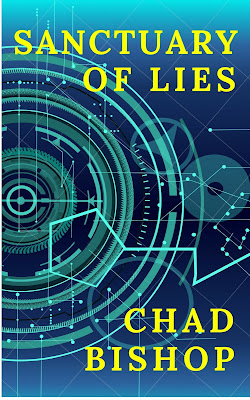 Being a child of divorce, Chad Bishop has experienced both sides of the American Family. The experiences of his formative years made him more aware of the women around him, their daily feats of resourcefulness, and their ingenuity, which often went unnoticed and unacknowledged by society. His stories highlight societal issues and the ever-changing challenges women face. Learn more about Chad and his books at his website.

I write techno-thrillers.  It may seem like an oxymoron but when I was growing up, I was always fascinated by complex mysteries. While I have my authors that have inspired me to continue on this road, I have to confess that the roots of my fascination started in a holiday tradition.

Christmas comes in December, but I had aunts who started in September. They were knitters. During the summer, pictures were cut out of magazines and fashion books were raided. Then, September would come and the buying frenzy of yarn would begin. The month of September was like cyber Monday but all month long. Then at the end of the month out would come the patterns, the needles and yarn bags.

I’ll admit they tried to get me to knit, but it wasn’t a talent I could acquire.  What did catch my attention were the diagrams of the complex cables and knits. My aunts were the first coders I ever met. They saw the diagrams, looked at the output and decided they wanted to customize some items. Then they began to mark up the diagrams. When the diagram became too messy, they pulled out blank diagrams, wrote their own legends, and began to code.

I like coding, technology and how it all works together. In my books the women are out-going, independent and problem solvers. Sanctuary of Lies is about a woman who had made killer code. It has the ability to bring down airplanes without warning. The code is aptly called Houdini, and everyone wants it. The book also introduces the dark web. The dark web is essentially the web’s black market, where everything is for sell. This book introduces you into the world of technology through the eyes of these women.

I write about contemporary subjects because that’s what my aunts spoke about as they knitted. Politics flew just as quickly as the needles. My tapping on the keyboard doesn’t have the same clicking of wood and metal but it reminds me why I chose my career and why I write about what I write.

Sanctuary of Lies
There are 4.7 billion searchable sites making up 10% of the web, the other 90% is dedicated to the "dark web". Within that environment there is a thriving economy where everything is for sale: sex, armies and code for hire. Well-known companies buy and sell for governments and NGO’s (non-governmental organizations). They appear as benign legal boutique companies and consultants, but their true purpose is to be the middlemen/cyber lynchpins for these illicit goods and services.

Isabella Nunez owns a computer firm in Brooklyn with her lover Jacob Costa. Accepting her infertility, they have a blue nose pit bull called Justice as their “child” and live simple lives as techie nerds. Isabella’s idyllic life is shattered when several days after her lover’s ex-wife, Simone Johns’, reported death, Simone sends Jacob an email to come save the child, he didn’t know they had.

Thanks for hosting me on your blog today.

Happy to have you here, Chad!

Finding a title is like naming a child. You want to put your best foot forward.