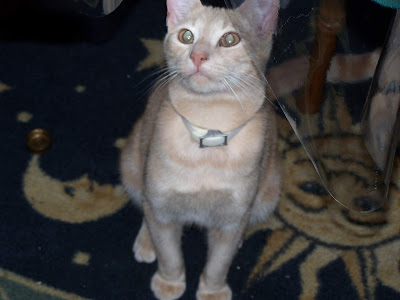 Janice Seagraves grew up with a deep love of science fiction and adventure stories. Now she writes them, along with romances. And cats. Learn more about her and her books at her website.

Cats in My Stories
I seem to write cats into my stories a lot lately.

In Matrix Crystal River, I have a Shadow Cat that the heroine names Fluffy. (Named after a kitten I had as a child.) The cat will become a large cat about the size and shape of a cougar, and you’ll see him again in Matrix Crystal Rebels. Both are in my Matrix Crystal Series.

In my Chronicles of Arcon series, there’s a cat Goddess. She’s about the size and shape of a fluffy Maine Coon but lavender in color. She also talks and can change her shape from a cat to an Arcon, which is what my aliens are called. So, if you like talking cats, you might enjoy my series. She’s not in every book, because she’s a cat, and you know, shows up only when it pleases her.

In the book I want to talk about today, Year of the Cat, I have Jared Catterick, a werecat who is one of my favorite characters. He was fun to write, and I enjoyed the interaction between him and Morgan, his love interest.

Jared is Scottish and has a Scottish accent. His accent is softer in the beginning of the series because he’s working at a ski resort, but during the second half of the book it’s stronger because he’s comfortable around Morgan and allows his true personality to shine through. I don’t say this in the book, but you’ll see his accent get stronger, if you look for it.

Originally, Jared's story started off in three small segments and remained that way for years. I had Jared and Morgan’s personalities very firmly in my mind. I just had to connect the pieces, and eventually I did.

The original finished story was called “Werecat Love” and was only five thousand words long and published in an anthology. I enjoyed writing the story so much that when the contract ended, I returned to the story and added more to it to lengthen it and changed the title to Year of the Cat.

I just had to write a longer story about their love.

Jared was inspired by my cat Baron. I still miss him. He was a sweet boy, but he was a short haired, blond tabby where Jared is an orange tabby. And when Jared is in his human form, he has a shock of orange hair that stands on end.

And, I'm not seeing any end in sight for my fascination with adding cats to my romances. Which is good news if you're a cat lover and enjoying reading about my felines. 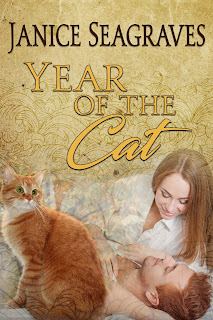 Year of the Cat
Morgan isn’t expecting romance when she accompanies her friend for a week of skiing, but when she meets Jared, all bets are off.

Haunted by the loss of his parents, werecat Jared Catterick earns his keep working for the Catclaw Clan. Jared has secrets that he doesn’t mind sharing with a special lady, and he hopes Morgan is that special someone. When his past and present collide it’s worse than he imagined, and he’s forced to fight for his life.

I think having pets in a story really round it out and give depth to the character. I have dogs and cats in my stories.

I have an upcoming book that has a dog and a cat.

Thank you For having me on today. It was fun. :)