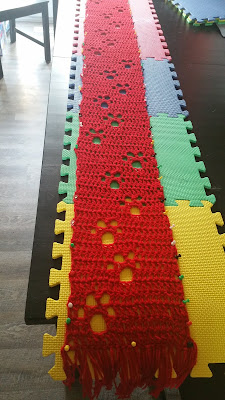 Tracy Cooper-Posey is an award-winning and bestselling author of more than 100 romantic suspense and historical, paranormal and science fiction romances in which random acts of crafting and cooking sometimes take place. She’s addicted to Irish Breakfast tea and chocolate, sometimes taken together. In her spare time she enjoys history, Sherlock Holmes, science fiction and ignoring her treadmill. An Australian Canadian, she lives in Edmonton, Canada with her husband, a former professional wrestler. Learn more about Tracy and her books at her website where you can find her free four book Starter Library.

Meandering Paw Prints Scarf
I was delighted to find out about Lois/Anastasia’s crafting background. I’ve been a dedicated sewing hobbyist for many years, and I’ve lost count of the cosplay outfits I’ve made. I also love crochet (knitting, not so much), beading and quilling.

I try to make as many Christmas presents for my family as I can, each year, in my not-so-infinite spare time. A couple of years ago, I made two of these Meandering Paw Prints scarves, one for my daughter and one for my daughter-in-law. They really went over, and both women are still using them each winter.

I used Bernat Premium yarn, which is lovely and soft—just what you want touching your skin. It’s a reasonable price, too.

If you want to use super economical yarn, you could always soften it using some of the DIY methods, before you make the scarf…or after.

The pattern is super easy. Once you’ve completed a couple of repeats of the pattern, you’ll have it memorized. I made both scarves while sitting in front of television.

Each scarf only took a couple of nights to make—and these are long scarves, as you can see in the photo. Up here in the frozen north, we like a lot of warm layers.

You could make the scarf as long or short as you want, or that your yarn allows. Solid colors work best to show the paw prints properly.

The pattern is from Amy B Stitched, and it is free. You can find it here, or on Ravelry, here. I believe the author also now offers a Paw Print beanie pattern.

My latest novel, War Duke of Britain, book 4 in the Once and Future Hearts romance series set during the time of King Arthur, will be released on Thursday, and is currently available for pre-order. 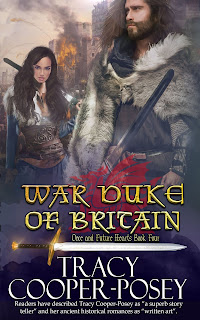 War Duke of Britain
A Once and Future Hearts Novel

He is not the enemy she came to fight.

Idris the Slayer is the champion of the northern kings. Undefeated in battle, the dark, lone warrior who rides to war with a black wolf at his side spreads fear before him, even among those counted his allies.

When Rhiannon of Galleva rides to her first battle with Emrys and Cai, she expects to fight the Saxon hoards pouring into Britain. She is not braced to defend herself against Idris’ incursion into her heart.

He is a dangerous man to be drawn to, for his allegiance lies with king Lot of Orkney, who holds no love for Uther, the aging High King. Rhiannon’s parents, Anwen and Steffan, are loyal to the High King, as is Count Ector, Cai’s father. Rhiannon’s association with a northern man tears open secrets that have brewed for a generation, forcing Uther and his commanders to fight enemies on two fronts.

Wow, that scarf is the cutest! I love the paw prints! Great job Tracy.
I also loved your latest book:
War Duke of Britain
It was a fantastic read that really drew me in. I felt as though I was there amongst them on the battle fields. Pick up a copy, you will enjoy it.
I voluntarily read an advanced reader copy of this book.

Your scarf is awesome! I can knit but I can not crochet. I sew and try to make jewelry.
I have been trying to do some repurposing of clothes, like making men's shirts into tops for me. Kinda hard without help or a dress form. Don't have room for one. Anyway, both you ladies are very awesome with all your different talents.

What a delightful scarf and tribute to those gorgeous fur balls in our lives!!

I admire your love of craft, I'd much rather be reading so I appreciate your restraint and dedication to writing such enthralling books that I'm totally addicted to!
The Once and Future Hearts series is excellent and there's so many other different types of romance novels & series written by Tracy too, that I'm a very happy addict!

I absolutely love the scarf. It is so cute with the paw prints. I have two dogs so that reminds me of my fur babies. Wish i knew how to crochet.

I worked for years without a dress form. There are lots of hacks and tricks for fitting yourself, including using your phone to take pictures and analyse fit.

There's always a way around issues!

Thanks, Ingrid -- Oh yes, I very much restrict myself on the craft side, or I'd never get books written. But I do love the few days I get, here and there.

My crafting project wishlist is as long as my books-I-wanna-write list. :)

Thanks for stopping by!

Of course, it's also kitty paw prints--that's what I tell myself, as I have three cats. Or, looked at another way, two cats, and a crazy kitty who thinks he's a puppy (he even chases his own tail).

I love the scarf!! It is very pretty if one is an animal lover and would make a super gift.

Thank you for sharing!

Thanks for stopping by.

How you ever find the time to do crafts while writing such magnificent stories, newsletters, blogs etc is always amazing.