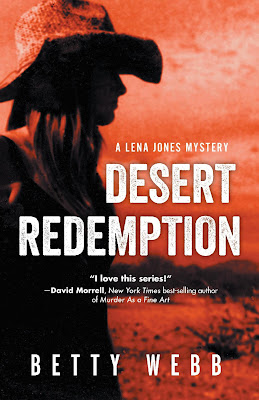 For twenty years mystery author Betty Webb worked as a journalist, interviewing everyone from U.S. presidents, astronauts who walked on the moon, and polygamy runaways. A nationally syndicated literary critic for more than thirty years, she currently reviews for Mystery Scene Magazine. She is the author of ten Lena Jones books and five Gunn Zoo mysteries. Learn more about Betty and her books at her website.

The Empty Nest
Although I enjoyed being the mother of two sons, I’ll admit to feeling relieved when they finally left home to begin their own lives. There was no empty nest syndrome for me. Instead, I redecorated their room, turning it into the den where I would attempt to write the Great American Novel.

Twenty years later I still hadn’t written the Great American Novel (Has anyone actually done that yet?), but I did create Lena Jones, a wounded foster child who went on to become a rough and tumble private investigator in Scottsdale, AZ. I watched her as she fought her way through her first big case in Desert Noir in 2000 and cheered her on through nine more adventures. This all ended in December of 2018 when I typed THE END on the last page of Desert Redemption, the tenth and final Lena Jones novel.

Although I hoped they would, the angels didn’t sing. No problem. As an ex-reporter, I stopped hearing the angels a long time ago. But I still heaved a sigh of relief as I wrote the accompanying letter to my editor Barbara Peters at Poisoned Pen Press, and attached the manuscript. There. I was free. Done. Finished. It was over.

My feet did a happy dance under my desk as I wiggled my butt and hummed the first part of the “Hallelujah Chorus.”

But the moment I hit SEND and the manuscript headed off into the ozone, I began to cry.

Writers are weird. Sometimes we take our fictional friends more seriously than our real ones. And even our families.

That’s because a writer’s characters become real to us. For nineteen years I would wake up in the morning, thinking, “What’s Lena going to do today? Where’s she going to go?”

I followed her through Desert Noir, as she explored the abuse of eminent domain. In Desert Wives I took her to a polygamy cult where she investigated the sexual abuse of young girls. Then in Desert Shadows, she fought against the rise of White Power groups. in Desert Run she learned that some new crimes were connected to the escape of German POWs from a Phoenix POW camp during WWII. In Desert Cut Lena confronted an ancient and vicious practice affecting young girls. In Desert Lost she learned that polygamy’s many crimes don’t affect only women. In Desert Wind she exposed the cover-up of the many deaths connected to Nevada’s atom bomb testing In Desert Rage she fought to save two teens from being imprisoned for murders they didn’t commit. In Desert Vengeance she considered killing the foster father who had raped her when she was nine, and in Desert Redemption her long search for the mother who’d abandoned her finally came to an end.

That’s a lot of history with one character, a history that made Lena Jones the daughter I was never fortunate enough to have.

Now I sit in front of my computer with a hole in my heart, an empty space that my Lena Jones used to occupy. She had her problems, sure, but her courage and compassion more than made up for her flaws. So I left her in that happy place she’d always wanted to live in (no, I didn’t kill her!) Finito, Lena, and brava. And today, to nurse my aching heart, I began writing another series.

But in a way, I didn’t really leaving my brave girl behind, because the new series is about her great-grandmother. And in that series, we’ll learn how Lena Jones wound up with her courage and compassion.

Desert Redemption
At the age of four, Scottsdale private eye Lena Jones was shot in the head and left to die on a Phoenix street. After her rescue, she spent years in the abusive foster care system, never knowing who her parents were and why they didn’t claim her. When Desert Redemption begins, she still does not know her real name.

Lena’s rough childhood--and the suspicion that her parents may have been members of a cult—keep her hackles raised. So when Chelsea, the ex-wife of Harold Slow Horse, a close friend, joins a “new thought” organization called Kanati, Lena begins to investigate. She soon learns that two communes—polar opposites of each other—have sprung up nearby in the Arizona desert. The participants at EarthWay follow a rigorous dietary regime that could threaten the health of its back-to-the-land inhabitants, while the more pleasure-loving folk at Kanati are dining on sumptuous French cuisine.

On an early morning horseback ride across the Pima Indian Reservation, Lena finds an emaciated woman’s body in the desert. “Reservation Woman” lies in a spot close to EarthWay, clad in a dress similar to the ones worn by its women. But there is something about her face that reminds Lena of the Kanatians.

While investigating, Lena’s memory is jolted back to that horrible night when her father and younger brother were among those murdered by a cult leader named Abraham, who then vanished. Lena begins to wonder if either EarthWay or Kanati could be linked to that night, and to her own near-death. Could leaders of one or both shed light on what had happened to Lena’s mother, who vanished at the same time as Abraham?

All these mysteries are resolved in Desert Redemption, the tenth and final Lena Jones case, which can also be enjoyed on its own.