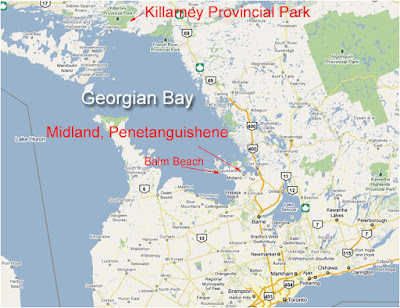 Ken Ogilvie worked in a variety of roles in the environmental field, including holding positions with three governments in Canada and serving as the Executive Director of Pollution Probe, one of Canada’s longest standing environmental groups. He’s active as an environmental policy consultant and has served on the Boards of Directors of several non-profit organizations. Learn more about Ken and his books at his website.

Rebecca Bradley is a 24-year-old constable with the Ontario Provincial Police. Her goal is to become a homicide detective and learn how to catch killers. Psychologically damaged by the unsolved murder of her mother when she was eight years old, Rebecca is driven by her mission to catch the perp. She’s obsessed with justice and retribution, and haunted by dreams of revenge.

In Her Dark Path Rebecca gets her first chance as an acting detective – to investigate the cold case of Abigail McBride, who vanished for 16 days and then was found dead in her own home. The brutal crime shocked the small Canadian town of Conroy.

Conroy is a neglected and dying Canadian town with a population of less than four hundred. It’s isolated from the main tourist destinations of Georgian Bay to the west, Lake Simcoe to the east, and the sparkling lakes of the Canadian Shield to the north. Only the McBride murder has put it on the map. The last decent jobs disappeared twenty-five years ago when Conroy’s sawmill closed. Young people flee town as fast as they can.

Although formally part of Lake Huron, one of the five Great Lakes, Georgian Bay is a massive body of water in its own right (about 80% of the surface area of Lake Ontario). The eastern side of the Bay is known as the 30,000 lakes and forms the largest fresh water archipelago on the planet. Revered for its stunningly gorgeous rocky and wind-swept landscapes, the eastern shore has been described as “a pink necklace of islands scattered on a turquoise sea.” In 2004, the area was designated as a world biosphere reserve by the United Nations Educational Scientific and Cultural Organization (UNESCO). 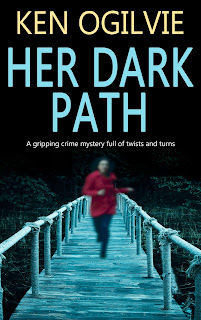 16 years ago, Rebecca Bradley’s mother was murdered. Rebecca was only eight years old. The killer has never been caught. Growing up, Rebecca vowed that one day she would track him down and make him pay.

Now Rebecca is a young policewoman in Ontario. She wants to become a homicide detective. Her first investigation is the cold case of a woman who vanished for 16 days and then was found dead in her own home. The brutal crime shocks the remote Canadian town of Conroy.

The puzzling case has uncanny similarities to the murder of Rebecca’s mother. Both victims were found strangled in their own kitchens.

Can Rebecca keep her emotions together as she closes in on a killer with connections to her family and tragic past? And will she finally get justice for her mother?

Wonderful setting for a novel and Rachel Bradley looks to be an interesting hero, both ambitious in her career and personally tied to the investigation. This seems like it is a series? Is that the case? Is the plan to publish a series of novels to follow Her Dark Path?

I live up in the Canadian Shield country of central Ontario. I've read the book. I think it is interesting how the setting influences the plot. It is not a rural landscape dominated by farms that most people would expect if you live in other parts of North America. It would be interesting to hear what the author thinks about setting and plot.

It's definitely a series. The second book is titled HOUND and was published in April 2019. Hound is a secondary protagonist in the first book and throughout the series, and I wanted to strengthen his role early on, which HOUND does. Each book will have crimes and mysteries, but will also be part of a longer story arc/deeper mystery.

As for the setting, it was carefully chosen both for the wilderness aspect and for the intriguig history surrounding the Jesuit mission in the Midland area (look for more on that in later books). Another feature is the Indigenous people who have lived in the area for thousands of years. HOUND introduces one indigenous person, in particular, who will continue to play a key role in the series.

I must say that being from a small town in southern Ontario, I really enjoyed the familiarity of the towns, the landmarks and natural beauty and even recognizing the “character/personality” types that i knew over the years. I’m always fascinated by the amount of research that must go in to a work like this. Can you comment on how long this takes and how “efficient” the process is. I’m sure you must end up with material that is not used, so do you research with a mindset that this will be available for future books?

Ken,
Canada is a big country. Can you give us a sense of how long it takes to drive from Conroy, to Toronto, for example.

Hi Nick: sorry I couldn’t reply right away.
Yes, I do a lot of research on the eastern Georgian Bay Area — geography, geology, ecology, as well as history, cities/towns and so on. Most of it never gets into the books. Just things relevant to the story. But the research stimulates thinking and influences plot and character development. I definitely have future books in mind while I’m researching. The other key thing I’ve done is to drive the area, all the way to the northern tip of the Bay. I scoured out ghost towns and hung out in a few bars and restaurants to get a feel for the people there. Finally, I had someone from the area review and comment on my books, which caught some ecological errors that I fixed.

Conroy is a fictitious town, which I have situated about two hours’ drive north of Toronto (assuming no traffic — a really bad assumption these days). I have taken some license with the setting to make it suit the story. Ken

I've read both Her Dark Path and Hound and enjoyed them immensely. In particular, I've become attached to some of the main characters. Are you planning to include Hound and Rachel in any of your future novels?

It has an interesting mix of characters and is set in a rugged landscape of lakes, rivers, small towns and mines. This is the kind of place where people can disappear, willingly or not.

Given recent news of crimes in the Canadian north and in the Muskoka region, not very far away from Georgian Bay, these books feel eerily current.

No kidding. Good thing I’m not superstitious. Or am I?

"Hound" has a captivating title page - the reflection of the sky makes the ditch look like the profile of a head - any link to the first or third book of the trilogy?

No explicit link. It’s just Joffe Books, my publisher, finding an intriguing photo. But I really like the mystical and eerie feeling it conveys. I can also picture a hound (and my character HOUND tracking someone through there).

These are great reads. I'm curious to know what's drawn you to becoming an author?

I started working on the novel several years ago as a way to get a distraction from my far-too-heavy workload when I was the Executive Director of Pollution Probe. I found that trying to relax in front of the tv just put me to sleep. I still had lots of energy to burn, but I needed to channel it to something other than work. I recalled that I had once criticized a novel I was reading and tossed it away, saying, "I could write a better book than that!" My conscience must have held on to that bold declaration and came back to challenge me to put my money where my mouth was, so I got up very early in the morning before work and started writing. After pecking away at my first book for a few years, I suddenly got motivated to finish the whole book. The result was HER DARK PATH (after many, many revisions, comments from writers and friends, and so on).

I am Canadian and have visited Georgian Bay, Lake Huron and the surrounding areas which are unique and spectacular. Summer there is memorable and special. Your book sounds captivating and I enjoy reading novels which depict an area and town which I am familiar and have visited.

Great to hear that. My parents grew up in southern Georgian Bay, and we vacationed there and on Lake Huron every year until I went to university. I have cousins and second cousins from Manitoulin Island through to Midland.

I'm halfway through Her Dark Path and thoroughly enjoying it - a friend recommended it and said I would love it. We used to go to a cottage on Georgian Bay when I was a child and I remember stopping in small towns on the way. I was always fascinated by the feel of a small town and the characters we would run into. I keep thinking that this would make a great audio book. Do you have any plans for the book to take this route or do you think it's too soon?

No audio book plans yet. I’m still focused on writing the third book in the series, which will unveil some deeper mysteries for Rebecca and Hound to solve.

The books evoke memories of childhood holidays in the Georgian Bay Area. The characters are intriguing and there are mysteries in the backgrounds of both Rebecca and Hound that have yet to be revealed. Adding an indigenous component in the second book adds historical and cultural facets to the Canadian landscape and I look forward to more such details in future books. As Rebecca is an Ontario Provincial Police (OPP) officer, a series with many different mysteries but several continuing characters, including Hound, is possible. Three levels of police forces exist in Ontario - municipal, provincial and national. Are there plans to incorporate some of the relationships among these different police forces in subsequent books?

No immediate plans to link up the forces. The Ontario Provincial Police is the third largest deployed police force in North America, and they cover all of Ontario, although the RCMP might play a role in future books.