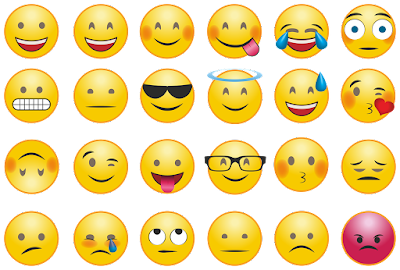 And now for something a little different…

Did you know today is World Emoji Day? Imagine, an entire day devoted to those tiny illustrations that seem so omnipresent in our lives these days! Then again, why not? For the simple reason that they are so omnipresent.

Emojis are great for quick text and email replies. Frankly, I wish more people would use them rather than not replying at all. How much time does it take to tap on a “thumbs up” or a “happy face” and hit Send? Common courtesy goes a long way, but unfortunately, common courtesy is a dying art. (Is there an emoji for a grumpy blogger?)

But then, there are the people who send an email or text with a long stream of emojis requiring a modern day version of the Rosetta Stone to decipher the message. I doubt I’m alone in head scratching, given that more than nine hundred million emojis are sent each day on Facebook Messenger without any text at all.

While doing researching for this post, I came across some interesting emoji facts. For instance, did you know that only 7% of people who use the peach emoji actually do so to indicate a peach? You probably did, but naïve waif that I am, I certainly didn’t! Should I be surprised there are so many dirty minds on social media? Probably not!

There are now a total of 2,823 emojis.157 were approved in 2018. Approved by whom? Who knew there was some sort of official council that rules on whether or not an emoji can become an emoji? Again, not I.

There are even emoji awards. The best new emoji in 2018 was the Exploding Head.

Emoji of the Year went to Thinking Face.

And of course, let’s not forget the Emoji Movie. You know you've really made it when there's an entire movie devoted to you and your iconic pals--not to mention Patrick Stewart portraying the Poop emoji. Now I have to wonder if Emoji Movie 2 will feature the Pile of Poop as Macbeth.

What do you think?
Posted by ANASTASIA POLLACK at Tuesday, July 16, 2019

I used to ignore the emojis but now love them. I wish more people would reply with them. You're so right, how long does it take?

My favorite emoji? While I do love the exploding head, my favorite is the sideways laughing with tears. I use that a lot.

I am so lame when it comes to emoji. I spend time looking for the perfect one and feel I wasted time. So I usually go with...smiley face or a heart. lol

Thanks for stopping by, N.N. and Vicki! It's amazing how much time we waste on things like emojis, isn't it?

What a fascinating post. I do use emojies - usually together with text, but like Vicki, I tend to waste a lot of time looking for the perfect one!