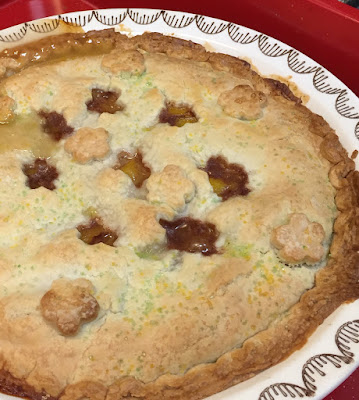 Diane A. S. Stuckart is the NYT bestselling author of the Black Cat Bookshop Mysteries (writing as Ali Brandon). Her upcoming Georgia B&B Mystery series, written as Anna Gerard, will debut this July with Peach Clobbered. Learn more about Diane and her books at her website.

Peaches and Penguins and Cobbler, Oh My!
My name is Anna Gerard, and I am a cozy mystery writer who doesn’t cook. Don’t get me wrong. I can rustle up a tasty enough meal to feed my husband and me on a regular basis. And the rare times that I entertain, I do pride myself on fancy place settings and neatly plated food. But I don’t cook or bake for the fun of it. With everything else I’ve got on my figurative plate, spending time in the kitchen is a necessary evil, nothing more.

But the whole not-cooking thing has proved a bit problematic in the cozy mystery world, where recipes are king…er, queen. Particularly with my new Georgia B&B Mystery series. Not that I had originally anticipated a problem, since the working title for Book 1 was Death in a Penguin Suit (yes, the story has penguins, of a sort). But then my publisher—who apparently decided to emphasize the breakfast portion of B&B—decreed that we needed a title more evocative of Georgia and bed and breakfast inns. And since the series logo features a peach, the marketing department decided to call my debut book Peach Clobbered.

Problem was, for the first few months of rewrites, I was reading the title as Peach Cobblered, as in the dessert. Even after my editor corrected me, I warned her that the word was close enough that people were sure to expect recipes as part of the story. She assured me they wouldn’t…but, just in case, I decided to go with the peach theme throughout the book so that the title made sense.

And so my amateur sleuth and innkeeper, Nina Fleet, has her B&B breakfasts catered by Peaches and Java, the local coffee shop/bakery. And, of course, P&J’s specialty (care of bakery co-owner, Daniel Tanaka) happens to be a fancy peach cobbler with a yummy amaretto whipped cream topping, which is served and enjoyed throughout the book.

As for the great expectation of recipes, turns out I was right. More than one reviewer wanted to know if recipes were included. In fact, that’s kind of how I ended up writing this blog post. But that also meant I had to come up with a recipe. Fortunately, peach cobbler is a pretty basic dish, so I did manage to “cobble” together an easy-peasy version. Prep time is minimal, and in my humble opinion the finished product is as good as anything from Daniel’s bakery. Enjoy!

Combine all ingredients except the piecrust in a bowl and mix well, then transfer to a greased pie pan or comparable baking dish. Top with the uncooked piecrust (Crust options: you can completely cover the filling with the crust, adding 2-3 slits to vent the steam. Or slice the crust into strips and weave into a lattice pattern. Or like, Daniel you can get creative and slice designs into the uncooked crust before laying it over the filling.)

Bake approximately 45 minutes (30 minutes for a convection oven), or until the fruit is bubbling around edges and crust is golden brown. Let cool a few minutes and then scoop into individual serving bowls. If desired, top with Amaretto Whipped Cream.

Combine whipping cream and powdered sugar in mixing bowl. With hand or stand mixer, beat on low until sugar is thoroughly dissolved into the cream (approx. 1 minute). Add amaretto and beat on high for another 2-3 minutes or until the cream forms stiff peaks. Make in advance and keep refrigerated until ready to serve atop the cobbler. 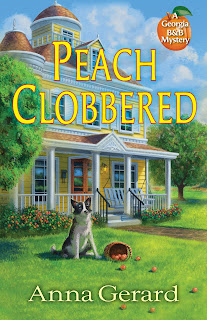 What’s black and white and dead all over? Georgia bed and breakfast proprietor Nina Fleet finds out when she comes across a corpse in a penguin costume.

Nina Fleet’s life ought to be as sweet as a Georgia peach. Awarded a tidy sum in her divorce, Nina retired at 41 to a historic Queen Anne house in quaint Cymbeline, GA. But Nina’s barely settled into her new B&B-to-be when a penguin shows up on her porch. Or, at least, a man wearing a penguin suit.

Harry Westcott is making ends meet as an ice cream shop’s mascot and has a letter from his great-aunt, pledging to leave him the house. Too bad that’s not what her will says. Meanwhile, the Sisters of Perpetual Poverty have lost their lease. Real estate developer Gregory Bainbridge intends to turn the convent into a golfing community, so Cymbeline’s mayor persuades Nina to take in the elderly nuns. And then Nina finds the “penguin” again, this time lying in an alley with a kitchen knife in his chest.

A peek under the beak tells Nina it’s not Harry inside the costume, but Bainbridge. What was he doing in Harry’s penguin suit? Was the developer really the intended victim, or did the culprit mean to kill Harry? Whoever is out to stop Harry from contesting the sale of his great-aunt’s house may also be after Nina, so she teams up with him to cage the killer before someone clips her wings.

Thanks to Cloris and Anastasia (and Lois) for hosting me! And, yes, the picture of the cobbler is the very one I made with my own two hands (that's green sugar sprinkled on top, in case you were wondering). It was YUMMY!

I'm looking forward to making this cobbler as soon as Jersey peaches start showing up at our local farmers market, Diane.