AUTHOR JUDY ALTER WRITES ABOUT THE SECOND BATTLE OF THE ALAMO

You may Judy Alter know her as a mystery author, but Judy wears several literary hats, as the prolific author of fiction and nonfiction for adults and young adults. She’s focused much of her career on writing about women of the American West and has been honored with the Western Writers of America Owen Wister Award for Lifetime Achievement. She’s been inducted into both the WWA and the Fort Worth Public Library Literary Hall of Fame. Learn more about Judy and her books at her website and her two blogs: http://www.judys-stew.blogspot.com and http://www.gourmetonahotplate.blogspot.com. Today Judy joins us to tell us about the latest addition to her books on American West women.

The Second Battle of the Alamo

Every year over two million people visit Mission San Antonio de Valero, better known as the Alamo, site of the massacre by Mexican soldiers under Santa Anna of heroes of the 1836 Texas Revolution--Davy Crockett, Jim Bowie, and William B. Travis, along with more than two hundred men other men. If you haven’t visited, the Alamo should be high on your bucket list. There’s something breathtaking about standing in front of that iconic chapel or looking at the adjacent long barracks.

When you visit this shrine, you should know the story not only of the siege but also of the second battle of the Alamo. In 1903, the threat of demolition hung over the remaining portions of the mission. Two women combined their efforts to preserve the historic site.

Adina De Zavala had the passion for historical accuracy; Clara Driscoll had the money. Neither could have saved the Alamo alone, but together they bought the long barracks, where the Battle of the Alamo was actually fought, from private owners and turned it over to the Daughters of the Republic of Texas to manage.

Although they were very different—one was a young Anglo woman with untold wealth who had been on grand tours of Europe, the other of Hispanic descent, approaching middle age, who had never traveled beyond Texas—theirs was a natural union.

However, hard headedness—sometimes a Texas trait—turned what was once a friendship into bitter rivalry that reached a zenith when Adina barricaded herself in the long barracks for three days. The ladies’ fight to save the mission and their own fight has come to be known as the second battle of the Alamo.

Clara wanted the chapel to stand alone, in a park-like setting, as a shrine to the martyred heroes. She offered to pay for the demolition of the long barracks. Adina held firm that the fighting took place in the barracks, and the building must be preserved for its historic significance. Both women were members of the Daughters of the Republic of Texas, and their enmity tore the organization apart.
Eventually, Adina won the battle but lost the war. The long barracks was preserved, but she and her followers were expelled from the DRT. For almost a hundred years, Clara was hailed as the “Savior of the Alamo,” while history ignored Adina.

Clara was never involved in another historic preservation project. Adina, on the other hand, devoted her long life to historic preservation, exploring missions in East Texas and saving the Governor’s Palace in San Antonio. An early member of many of Texas’ history-oriented organization, such as the Texas State Historical Society, she tirelessly collected information and fought for her cause, Not until the 1990s did historians begin to look with any depth at her part in saving the Alamo.

The Alamo has withstood many battles since it’s eighteenth-century founding and today stands as a symbol of heroism and loyalty. It has inspired everything from movies to jigsaw puzzles. The cry of “Remember the Alamo” is known throughout the world. But few people know that without these two women, the Alamo might well be just another shabby shrine—or worse yet, a parking lot.

So go visit the Alamo, stand outside the barred windows of the long barracks and maybe, just maybe, you can see Adina peering out from the room where she took her stand, the very room where, it is said, that William B. Travis died. 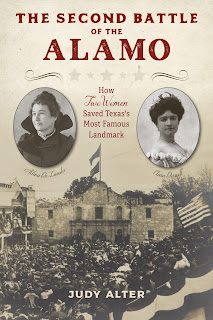 The Second Battle of the Alamo
By 1900, the tale of the 300 Texans who died in the 1836 battle of the Alamo had already become legend. But to corporate interests in the growing City of San Antonio, the land where that blood was shed was merely a desirable plot of land across the street from new restaurants and hotels, with only a few remaining crumbling buildings to tell the tale. When two women, Adina Emilia De Zavala, the granddaughter of the first vice-president of the Texas Republic, and Clara Driscoll, the daughter of one of Texas’s most prominent ranch families and first bankers, learned of the plans, they hatched a plan to preserve the site—and in doing so, they reinvigorated both the legend and lore of the Alamo and cemented the site’s status as hallowed ground. These two strong-willed, pioneering women were very different, but the story of how they banded together and how the Alamo became what it is today despite those differences, is compelling reading for those interested in Texas history and Texas’s larger-than-life personality.

Thanks very much, Lois, for letting me tell this story. It fascinates me.

It's always a pleasure to have you join us, Judy. I learn so much from your historical posts.