Author Lois Winston, she who writes about me, stops by today to talk about the first time she sewed something.

Do you remember the first time you picked up a needle and thread? Probably not, unless the memory is more involved, which is the case for me.

When I was four years old, I was spending the day at my grandparents’ house. My grandmother was sitting in the kitchen, darning a sock. Most people these days have no idea what darning means, let alone how to do darn, unless they lived through the Great Depression. Even people lucky enough to have income during those years, as my grandparents did, never wasted anything. If you tore a dress, a shirt, or a pair of pants, you patched it. If your big toe wore a hole in a sock, you darned it.

Darning involves placing a wooden egg or mushroom shape inside a sock. Some darning eggs have handles attached to them, as in the photo above; others don’t.

The darning egg is placed in the sock. The hole is stretched over the egg and held tightly in place with one hand. Then, with needle and thread to match the color and weight of the sock, a series of parallel vertical running stitches are made close together over the hole, extending at least 1/2" beyond the hole on all sides. Once the hole is covered with these vertical stitches, horizontal rows are woven over and under through each of the vertical stitches until this woven patch completely mends the hole.

So getting back to my story…

Grandma was darning a sock, and I wanted to sew something. “You have nothing to sew,” she said. 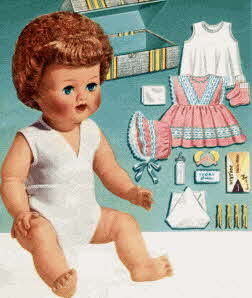 “Betsy Wetsy’s dress is too long,” I said, holding up the doll for her to see. “She’ll trip.”

Betsy Wetsy was a popular “drink-and-wet” doll in the 1950’s. The doll came with a baby bottle you filled with water. You inserted the bottle’s nipple into the hole in the doll’s mouth and squeezed the bottle to “feed” Betsy. Then she’d wet her diaper from the hole in her body.

After a good deal of pestering on my part, Grandma finally gave in. She threaded a needle for me, and told me to be careful. I marched into the living room, pulled the ottoman up to the sofa as a seat, and used the sofa cushion as a table. With Betsy still wearing her dress, I began to sew a hem.

I was extremely pleased with my efforts—until I lifted Betsy to show Grandma what a good job I’d done, only to discover I’d hemmed the dress to the sofa cushion! Needless to say, Grandma was not happy.

Click here to watch a Betsy Wetsy TV commercial from the 1950’s.

As I grew older, I began sewing my own clothes and eventually designed dolls, just like Emma  Wadsworth, my heroine in Love, Lies and Double Shot of Deception. 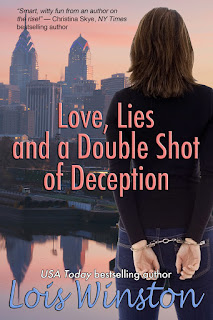 Love, Lies and a Double Shot of Deception

Life has delivered one sucker punch after another to Emma Wadsworth. As a matter of fact, you could say the poor little rich girl is the ultimate poster child for Money Can’t Buy Happiness — even if she is no longer a child.

Billionaire real estate stud Logan Crawford is as famous for his less-than-platinum reputation as he is his business empire. In thirty-eight years he’s never fallen in love, and that’s just fine with him — until he meets Emma.

I love the Betsy Wetsy story! Congrats on your new novel. It sounds great.

Thanks, Jacqueline! I wish I still had my Betsy Wetsy doll. :-(

Love the story. My grandmother was a talented seamstress, but it ended with her generation. Never had a Betsy Wetsy, but we did make handmade clothes for our Barbie dolls. I can knit, crochet, hem a skirt... and darn.But we did darned with the sock stretched over our hand rather than a wooden egg. After a few stabs you learned quick. congrats on the new novel.

Thanks for stopping by, Helen! Love, Lies and a Double Shot of Deception is not a new book. It came out in 2007, but it is about a doll designer.

But you didn't stick your finger. LOL

Good luck with the new release. And I wish you many sales.

Wonderful story. Since I grew up in the 1950's this resonates with me. A neighbor who had one daughter and was a stay at home Mom which most were at that time, sewed all of her doll's outfits in her sewing room.

Thanks for stopping by, Janice and Traveler! My mother failed at sewing hems, so it's a wonder I wound up with the career I did!

My mother darned socks. I don't remember what they felt like when I wore them.

Anonymous, even though I remember watching my grandmother darn socks, I never remember wearing any darned pieces of clothing. I wouldn't think darned socks are very comfortable.