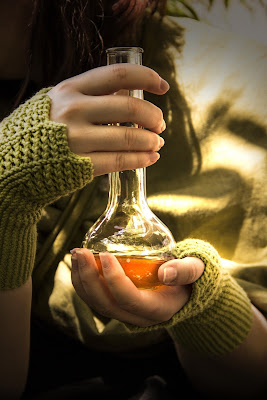 Today we sit down for a chat with adult contemporary, light paranormal romance author Ashlyn Chase, who also writes young adult or magical realism as Elisabeth or EB Lorow. Learn more about Ashlyn and Elizabeth and their books at their respective websites.

When did you realize you wanted to write novels?
I prefer writing novellas, but I’ve had to write longer to satisfy print demands. That’s not what you asked, is it? Okay, I came to writing later in life. I went to art school, nursing school, and didn’t begin writing seriously until I took a screenwriting course in the late nineteen nineties.

How long did it take you to realize your dream of publication?
From dabbling to epublishing, about three years. From there to traditional publishing with advances, another four years.

Are you traditionally published, indie published, or a hybrid author?
Hybrid. I'll admit, it's easier to let a publisher take care of all the details and put their money on the line, but it's becoming harder and harder to get those contracts now. Covid 19 has negatively impacted the print publishing world. Big time.

Where do you write?
I dictate my books on a handheld recorder with a background noise-canceling feature, so the answer is: Anywhere! When the weather is nice, I like to dictate on my balcony while I gaze at the ocean.

Is silence golden, or do you need music to write by? What kind?
Silence--or the sound of the waves only, so I can hear the voices in my head.

How much of your plots and characters are drawn from real life? From your life in particular?
I believe it was Thomas Wolfe who said, “Every novel is an autobiography.” I get that. But sex with vampires and werewolves? Um, no. My characters are never based on real people…unless maybe subconsciously. They come straight out of my imagination.

Describe your process for naming your character?
Mostly I just let a name come to me. (If you haven’t noticed yet, I let my muse do a lot of the work.) I try not to duplicate names. If I come up with a name that isn’t right, the character lets me know. Names come with a personality, especially first names and nicknames. I’ll change the name until I get the right personality. Speaking of that, my young adult pen name was wrong, so I changed it from Liz to Elisabeth or EB Lorow. It just didn't 'feel right' before.

Real settings or fictional towns?
Real. That’s one of the reasons I like Magical Realism. Previously I set a lot of books in Boston. Sometimes my characters travel, mostly to the Caribbean. I’ve spent a lot of time in both places.

What’s the quirkiest quirk one of your characters has?
My nursing days have provided me with loads of health challenges for my main characters, but if you’re talking about something just plain weird, one of my secondary characters in the Strange Neighbors series, Nathan, a shapeshifting Raven, admitted he had a thing for women's armpits.

What’s your quirkiest quirk?
Ha! I should have seen that one coming, but I didn’t. Okay, let me think… I love the ocean, but I won’t swim in it—ever since watching the TV show Dexter.

If you could have written any book (one that someone else has already written,) which one would it be? Why?
Outlander. Because…Outlander!

Everyone at some point wishes for a do-over. What’s yours?
Not to marry my first husband. I’m glad I have his daughter, but I wouldn’t have married nor lived with him.

What’s your biggest pet peeve?
People making fun of my accent. Yes, I have a Boston accent. Sheesh! It’s not that funny. There are nine dialects of Boston accent, and I was lucky enough to get one of the classier ones. What drives me nuts is when someone (not from New England) comes right up to my face and announces “Wicked Pissah,” like I would ever say that. Ugh. Never have I uttered those words and I never will.

You’re stranded on a deserted island. What are your three must-haves?
A library, a fully stocked restaurant with electricity, and a Genie.

What was the worst job you’ve ever held?
Waitress at a French restaurant chain in Boston. La Crepe. We called it Le Crap.

What’s the best book you’ve ever read?
The Big Book of AA. No explanation needed (I hope.)

Ocean or mountains?
If I can’t have both, Ocean wins.

What’s on the horizon for you?
I wish I knew. Or not. That would take the excitement and adventure out of life. But there is one thing… I'm giving all my royalties to my daughter. She picked this really unfortunate time to start her own small business… And I can write for the joy of writing again. Trying to sell, sell, sell really gets in the way!

The best way to keep updated on my career is to sign up for my newsletters. I hold giveaways and contests for my subscribers. Find links at my websites. 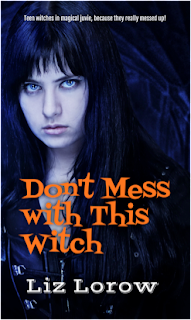 Don't Mess With This Witch
The Witches You Were Warned About Series, Book 1

Teen witches in magical juvie, because they really messed up!

Genevieve Howe, a 16 year-old witch, is not a bad kid, she’s just a really lousy witch. Sometimes her random thoughts unintentionally turn into actual spells, causing all kinds of trouble.

Now the administration needs Genevieve’s help to find a student/inmate who escaped. Why her? Because even though there’s something ‘wrong’ with Genevieve, she seems to be able to do what others can’t. If she can find Logan, will she turn him in, join him on the run, or find some other way to help without violating the code of honor among magical misfits?

Thanks so much for hosting me, Lois!
I know the name change is probably confusing as heck, but I appreciate your 'rolling with it.' LOL

For readers who want the scoop on my PG 13 books, check out eblorow.com From there you can sign up for my newsletter and get all the latest...like news of the next book!

Happy to have you stop by, Elisabeth!