A former classroom teacher, Frances Schoonmaker is Professor Emerita from Teachers College, Columbia University. The Last Crystal, the third book in her The Last Crystal Trilogy, won the 2019 Agatha for Best Middle School/Young Adult Mystery. Learn more about Frances and her books at her website.

Years ago, an uncle told how he and his little brother made a Kansas City to Sacramento train trip every summer to visit grandparents—alone. Their father worked for the railroad. It was an affordable way to keep the family close. The idea captured my imagination. What kind of mischief might two boys get into on a train trip? Who kept an eye on them? What if the train broke down? What if…?

I had the beginnings of a story. Still, it didn’t seem fair for two boys to have all the fun. I knew that if there were two boys, there had to be two girls.

The busy life of wife, mother, elementary school teacher, and graduate student took precedence over writing. By the time I retired, I knew the story was to be a wilderness quest with room for facts, fantasy, and mystery. I wanted the four children to be real, ordinary kids, not superheroes. Intuitively, I wanted them to learn that one can act heroically while shaking in their boots and that sometimes you do what has to be done because it’s right, not because you think you can do it or have any chance of accomplishing it. I wanted the least likely of the characters to step up to the challenges they faced, too.

After more than a dozen years as an elementary school teacher and another dozen plus as a teacher educator, I know a lot about kids. Circumstances change, but people are driven by needs and wants that have existed since the beginning of time. So I planted four children I barely knew into my quest, starting on the famous Santa Fe Chief a couple of years after the outbreak of World War II.

I gave the eldest a family name. From that moment, I knew J.D. would be the standard bearer. He’d protect, lead, and keep the others from giving up hope. Mary Carol emerged as a caregiver, responsible, an organizer, imaginative, and bossy. Robert developed with the contents of his rucksack. They needed the rucksack if they were to survive in the wilderness. So Robert became a kid who is always prepared. He has all the answers because he’s read about the questions. From the first, Grace was the kind of protected, manipulative, darling little girl you’d like to give a good smack.

Underlying the events that shape the lives of the four children, is a struggle between immortal twins C’lestin and Celeste, charged with care of seven crystals set aside for the care and healing of the earth. Forfeiting her immortality to be the most beautiful woman who has ever lived, Celeste steals the crystals and uses them to sustain herself, down to the last one. Leave it to say that their development made me realize that when I finished The Last Crystal, I wasn’t done.

I kept wondering how the last crystal came to be where it was. Why were these particular children on a quest for it? Again, context led my characters. The children start out on the Santa Fe Chief train. What if the quest actually began on the Santa Fe Trail a hundred years earlier with another Grace, protected, privileged, probably equally bratty? Before I finished answering back-story questions, I had The Last Crystal Trilogy.

I didn’t follow a story formula or make a chart of protagonist, antagonist, and secondary characters. I created an evolving time line with settings as close to real as possible, meeting characters along the way. “Who?” “How come?” and “What if?” drove me. Some characters changed as I refined the story. Old Shep is a good example.

Old Shep was Grace Willis’s faithful dog on the Santa Fe Trail. The fourth and fifth graders in schools where I piloted The Black Alabaster Box fell in love with him. They didn’t love my switch from trail life to quest. Thankfully, they were still engrossed in the story. I realized they needed advance notice that magic was afoot. Old Shep was promoted to time traveler, mysteriously appearing in chapter one of The Black Alabaster Boxwith an important role in The Red Abalone Shell. I couldn’t leave him out of book three. I had to find a place for him.

All this is to say that in The Last Crystal Trilogy, character development was a messy, recursive process where circumstance and characters interacted to tell a story. 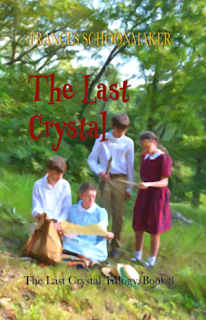 When they board the Santa Fe Chief in Kansas City, bound for L.A., the four Harrison children have never heard of the Last Crystal or the magic surrounding it. They are concerned about their father, who has been injured in World War II, and dread having to stay with their boring, old Uncle James. But before the train is half way to L.A., J.D., Mary Carol, Robert, and Grace discover that staying with their Uncle James is the least of their worries. They cross paths with a Nazi spy. One of them is kidnapped. Then, without warning, the four find themselves off the train, magically drawn into a quest for the Last Crystal. To get home again, they must cross two thousand miles of wilderness and find the Crystal with nothing to guide them but their wits, each other, and an old map that only the youngest can read.

I enjoyed reading how your characters' personalities developed. I know the books are YA, but I want to read them myself!