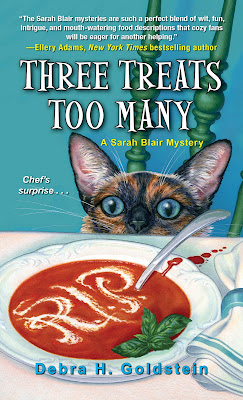 Today we sit down for a chat with retired judge and award-winning cozy mystery author Debra H. Goldstein.  Learn more about Debra and her books at her website and blog.

How long did it take you to realize your dream of publication?
It feels like a lifetime because I talked about writing a book for years. When I finally got serious, it was in stop and go fits, so it took about ten years to write my first novel, Maze in Blue. The day I announced at a meeting that I had a mystery I thought was ready for public consumption, it took three hours for an editor a friend in the audience had contacted to express interest and one week more to be offered a contract. I thought getting published was a breeze.

Where do you write?
In the beginning, I only wrote in my home office on the second floor of our home. After a foot injury prevented me from going upstairs, I divided my writing location between a big chair in my bedroom and a club chair in the living room. Where I really enjoy writing the most is if we go to the beach or visit a friend’s lake house. I stay in the airconditioned condo or house, look at the water, and write—that’s heaven.

Is silence golden, or do you need music to write by? What kind?
I prefer writing with show music playing in the background.

How much of your plots and characters are drawn from real life? From your life in particular?
I often take a gem of an idea or an impression of a person and blend them with my imagination to create plots and characters. That said, one aspect of Sarah Blair, the protagonist in One Taste Too Many, Two Bites Too Many, and the new Three Treats Too Many, is true to my life. Like Sarah, I find the kitchen frightening. And, like her, when I was growing up, my sister shadowed our mother when she made dinner while I lay on the couch watching Perry Mason reruns. During the first commercial, I emptied the dishwasher; the second commercial was set the table time; my dad came home during the third commercial; and we sat for dinner when the credits rolled. Today, I eat out or make things from prepared ingredients while my sister is a gourmet cook.

Describe your process for naming your character?
Other than trying not to have more than one character whose name begins with the same letter, I have no rhyme or reason for my characters’ names. I may start with one name but find as I write that another suits the character better.

Real settings or fictional towns?
The Sarah Blair series is set in Wheaton, Alabama, a fictional small town. I modeled the marble buildings, bridge into the city, and white steeple church after things like that in Wetumpka, Alabama, but I created other parts, like the town square from my personal knowledge and impressions of many of the small town squares I’ve visited. Wheaton is geographically located fifteen minutes from Birmingham, Alabama. That lets me bring in the landmarks of a bigger city, with my own additions for the sake of my art.

What’s the quirkiest quirk one of your characters has?
Because of Sarah’s fear of being in the kitchen and lack of knowledge about food items, if she is preparing a recipe that is new to her, she takes picture of the ingredients to the store to make sure she gets the right item. Otherwise, she might bring home red peppers instead of green, acorn squash instead of spaghetti square, or whatever.

What’s your quirkiest quirk?
Not only do I take pictures, like Sarah does, to the grocery. When I’m preparing a meal, I like to use different songs from Broadway shows as my primary means to time things (the timer on the microwave is secondary).

If you could have written any book (one that someone else has already written,) which one would it be? Why?
My first instinct is to respond with one of yours, Lois Winston, because of the ease with which you integrate humor and characterization (Anastasia here: Lois says to tell you she’s blushing!); but, from an opposite viewpoint, I would pick Damned if you Do, Damned if you Don’t by Marjorie Osterman. It was a first novel and it successfully captured life in the time period it was set and demonstrated the inner workings as the characters changed.

Everyone at some point wishes for a do-over. What’s yours?
Although I was lucky and satisfied by my legal career (litigator, judge), I wish I had had the confidence to write fiction earlier in life. I’m proud of the content and clarity of my legal writings, but my short stories and novels bring me joy.

What’s your biggest pet peeve?
My biggest pet peeve is people being rude. Their rudeness can take the form of a dismissive gesture or word or, in the world we now live in, the failure to care enough about others to wear a mask or refrain from doing the things that create breeding grounds for Covid-19.

You’re stranded on a deserted island. What are your three must-haves?
I should say water for survival, but I’d rather have cases of mini-Coca Colas. I’d also need good sunscreen or a way of making a shelter from the sun, because I burn easily. Something good to read would help pass the time, but a means of communicating to get off the island (a cell phone with service; an SOS radio that works), would be a better pick.

What was the worst job you’ve ever held?
The worst job I ever had was being an assistant to a Sunday School teacher who was too lazy to create lesson plans. Instead, he would say a few words and tell them to draw a picture, but he never collected them or discussed what the pictures signified. I was only fourteen, but I hated to see students in a classroom wasting their time.

What’s the best book you’ve ever read?
Damned if You Do, Damned if You Don’t had a big impact on me because of how well it was written. It spurred me to want to tell stories like its author had.

What’s on the horizon for you?
Kensington recently published Three Treats Too Many, the third book in the Sarah Blair series. I just turned in the fourth book, which will be published in June 2021 and am writing the fifth book now. I also have at least two short stories and two podcast readings of other short stories of mine that will be issued in the next year.

Anything else you’d like to tell us about yourself and/or your books?
I write for the reader to have fun, to escape into a story. This is a passion for me, so sharing my joy is essential.

Three Treats Too Many
A Sarah Blair Mystery, Book 3

When a romantic rival opens a competing restaurant in small-town Wheaton, Alabama, Sarah Blair discovers murder is the specialty of the house . . .

For someone whose greatest culinary skill is ordering takeout, Sarah never expected to be co-owner of a restaurant. Even her Siamese cat, RahRah, seems to be looking at her differently. But while Sarah and her twin sister, Chef Emily, are tangled up in red tape waiting for the building inspector to get around to them, an attention-stealing new establishment—run by none other than Sarah's late ex-husband's mistress, Jane—is having its grand opening across the street.

Jane's new sous chef, Riley Miller, is the talk of Wheaton with her delicious vegan specialties. When Riley is found dead outside the restaurant with Sarah's friend, Jacob, kneeling over her, the former line cook—whose infatuation with Riley was no secret—becomes the prime suspect. Now Sarah must turn up the heat on the real culprit, who has no reservations about committing cold-blooded murder . . .

Anastasia (and Lois),
Thank you for hosting me today. It is so much fun for me to talk about Sarah Blair, the protagonist of Kensington's Sarah Blair series. She's a woman after my own heart - one who finds being in the kitchen more frightening than murder. We both admire how handy you are when it comes to crafts and solving mysteries.

You're very welcome, Debra. We always enjoy having you stop by.