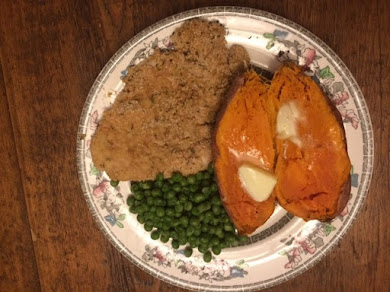 Today we have a double treat, an interview with Regency romance author Elf (yes, that’s her real name) Ahearn and her marinade recipe. Learn more about Elf and her books at her website where you can find links to her other social media and subscribe to her newsletter.

I’m a hybrid author by default. My books were published by Crimson Romance, which was sold to Simon & Schuster, which passed on keeping both novels on its backlist… alas.

Of Mice and Men by John Steinbeck. I would love to have the skill to make people laugh and cry the way Steinbeck does with that story. The characters are brilliant and the problem of Lenny’s brute strength and inability to control it is the most heartbreaking situation in literature. A class I teach for Romance Writers of America is called Conflict, Action, and Suspense, and I use Of Mice and Men as an example.

For nearly 20 years, I struggled as a New York City actress. Instead, I wish I’d lived in the country and gone straight to writing. Rejection is face to face in the theatre, whereas an author gets to read a no-go weeks after the submission. Believe me, that’s a lot easier to take.

New York is an amazing place—Broadway, SoHo, Fifth Avenue, Central Park—it’s got so many things to offer, it takes your breath away, yet every chance I got, I dashed home to the country. If you take a gander at A Rogue in Sheep’s Clothing, you’ll see it’s a story about a girl, a boy, and a horse. The horse is her best friend; that was me, except I had a pinto pony named Bettikins whereas in my book, the horse is Manifesto, a dapple grey stallion.

I was the personal secretary to two sadists who owned a radio station in Connecticut. Example: One of them took an incredibly nasty poop, and then made me search for something nonexistent in the attic where the bathroom fan vented. The same guy didn’t want to know when callers were on hold: “You are to treat me like the governor and make them wait until I’ve finished my other business.”

They were also yellers, and they yelled at me for everything. Example: One night, long after I’d gone home, the office alarm went off and the police showed up. The owners had visited the office, and one of them blew it entering the alarm code. When I said he’d probably made a mistake, he started screaming, “I never make a mistake! Never!”

Less than six months later, knowing my husband and I were applying for a mortgage, they terminated me. It would have been devastating except they fired employees all the time for the slightest infraction. In fact, by the time I lost my job, they’d racked up the second highest number of unemployment claims in the state—this from a tiny, rinky dink radio station. Ironically, the only employee they hesitated to dismiss was this crazy receptionist who came in early and lit a shelf on fire. Why didn’t they dump her immediately? Because they were scared. You see, they’d weaseled their way onto the board of directors of the local hospital and had the nursing staff cut so the lobby could be decorated with high-end furniture and the president supplied with a $10,000 desk. People in that peaceful Connecticut community hated them so bitterly, their tires were regularly slashed.

They’d spread their personal brand of lousiness so far and wide, they needed a bodyguard to visit New York City. You see, one of them had had a prime position in the fashion industry but lost his job due to lawsuits claiming employee abuse.

There is a happy ending, though: my husband and I got a mortgage on better terms, and I became a journalist—a job I absolutely loved. And here’s the kicker—my newspaper printed the story of how those two bankrupted the radio station and had to sell for less than it was worth. Karma, baby.

I’ve completed two more Regency romances with my signature “Gothic twist.” The moment I find a publisher, I’ll be building the suspense till their release.

I use this marinade on chicken, lamb, and pork. It’s super tasty and easy to make.

Allow meat to marinate for 10-20 minutes. I usually turn on the oven and wait for it to reach 350 degrees F (approx. 10 minutes), then remove the meat from the marinade. A Rogue in Sheep’s Clothing

In Lord Hugh Davenport’s opinion, women of the ton perpetually hide behind a mask of deception. That’s hard for Ellie Albright, the daughter of an earl, to swallow—especially since she’s disguised herself as a stable hand to get back the prized stallion her father sold to Hugh to pay a debt. If Hugh learns her true identity, she’ll lose the horse and her family will go bankrupt. Somehow, though, losing Hugh’s affection is beginning to seem even worse…