Sometimes a scheduled blog guest has to bow out due to any number of reasons. Such was the case today. Our scheduled guest is in the middle of a move and found she just couldn’t juggle one more responsibility right now. It happens, and hopefully, she’ll be able to reschedule at a future date.

Meanwhile, since we often like to promote recycling, reusing, and repurposing here at Killer Crafts & Crafty Killers, and because Halloween is only a little more than two weeks away, I thought I’d repurpose and update a few older posts with a Halloween spin and an older book with a Halloween adventure.

The Anastasia Pollack Crafting Mystery series is set in Westfield, an actual New Jersey town. My author, Lois Winston, chose a real town, rather than making up a fictitious one, because she’d learned that many readers enjoy being able to make a connection between the settings in books and places they know.

If you’ve never been to New Jersey, you might have an extremely negative and erroneous image of The Garden State, associating it more with bumper-to-bumper traffic, industrial waste, crime-ridden cities, and obnoxious reality TV stars. Yes, unfortunately we do have our share of those. However, we also have beautiful rolling hills, mountains, beaches and the most spectacular skyline in the world right outside our windows (for those of us lucky enough to live on the western side of the Hudson River.)

We also have some very lovely, historical small towns that date back to pre-Colonial times. Many have appeared in TV shows and movies over the years. One such town is Westfield, which was supposed to go all out for its 300th anniversary this year, but…well, Covid-19 had other ideas, and we’ve had to adapt.

Westfield was also the home of Charles Addams, creator of the Addams Family cartoons, which appeared in The New Yorker and were the basis for the television show of the 1960s and the subsequent movies and Broadway musical. Two years ago, Westfield created Addamsfest to celebrate our famous resident.

Addams was inspired to create his iconic cartoons by the Westfield Victorian home of his childhood. Unfortunately, the house burned down many years ago. In honor of Addamsfest, the town erected a replica of the house on a small patch of land in the middle of the lake in the center of town.

Addamsfest is still being held this year as part of our anniversary celebration but in a toned down, socially distanced, mask-wearing way, given our new normal.

By the way, few years ago Westfield was named the 30th safest place to live in the United States. Luckily, such surveys don’t include murders that are the product of my author’s imagination, like the ones that take place in A Stitch to Die For. 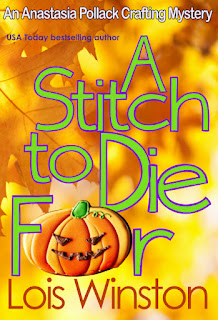 A Stitch to Die For

Ever since her husband died and left her in debt equal to the gross national product of Uzbekistan, magazine crafts editor and reluctant amateur sleuth Anastasia Pollack has stumbled across one dead body after another—but always in work-related settings. When a killer targets the elderly nasty neighbor who lives across the street from her, murder strikes too close to home. Couple that with a series of unsettling events days before Halloween, and Anastasia begins to wonder if someone is sending her a deadly message.

Never knew about the replica house, will have to visit, probably when COVID's over. I feel like I'm becoming an honorary Westfield resident from following the Pollack family.

The Addams Family replica house is only up during the month of Oct. for Addamsfest. Come to Westfield. Everyone wears masks and is respectful of social distancing. Walk around town and see the gingerbread Halloween houses in the store windows and the replica house on the island in the middle of the pond in Mindownoskin Park.