Debbie De Louise is a reference librarian at a public library and the author of cozy and traditional mysteries. Her latest release, No Gravestone Unturned, is the fifth book of her Cobble Cove cozy mystery series. Learn more about Debbie and her books at her website.

If you read cozy mysteries and follow a series, you’ll notice that new characters are often added, and the main characters change in sometimes subtle and occasionally major ways. Characters are added for a variety of reasons:

1. As victims, suspects, or perpetrators of a crime.

2. As romantic interests to one of the other characters.

3. To aid the detective or amateur sleuth in the investigation of the crime.

There are several ways that new characters can be introduced:

1. They can visit the town on vacation or for another reason.

2. They can move into the town.

3. They can already have lived in the town but not been featured in any of the previous books or known to all the characters in the series.

In my new release, No Grave Unturned, the fifth book of my Cobble Cove cozy mystery series, I’ve added human characters and also a cat character. The humans are the cousins of John McKinney, the husband of Alicia, the main character. They and their spouses come to Cobble Cove to attend the funeral of their mother, John’s aunt.

Another character added to the story is Ruth Carver, the mother of Edith and Rose. While Ruth’s daughters have been regular characters in the series, she hasn’t been featured in previous books.

There are a few other new characters who, while also residents of Cobble Cove, have yet to play a part in a story. These include Nathaniel Burroughs, the caretaker and his son Noah, and Warren Strand, the town’s banker. There are also characters from the past who are shown in flashback chapters – Kurt McKinney, John’s grandfather; Lydia McKinney, Kurt’s wife; Warren Strand, Sr., Warren’s father; and Rosalie Carver, Edith and Rose’s grandmother.

The new cat character is Salem, a black cat who belongs to Suzanne, one of the cousins who brings him with her from Florida.

The reason for the additions of these new characters is because they play parts in the mystery of who killed the caretaker’s son on Halloween in the Cobble Cove cemetery. They also fulfill the roles mentioned above for why new characters are added to a series.

As far as how regular characters change from book to book in a series, just like people in real life, they age and gain new knowledge from their experiences. Alicia is a very different woman than when she was introduced in A Stone’s Throw, the first book of the series. She arrived in Cobble Cove, her husband’s childhood hometown, as a grieving widow, searching for answers to the strange hit-and-run accident that killed him. Now, five years later in the 5th book of the series, Alicia is director of the Cobble Cove Library, married to John McKinney, and the mother of twins. She also co-writes a mystery series with her husband and has been investigating murders in the town.

Sneaky, the Siamese library cat, was also introduced in the first book. At that time, he was depicted as a normal cat who helped Alicia find clues by ordinary methods such as scratching at a box where secret letters were hidden. In the 4th book of the series, Love on the Rocks, Sneaky is joined by Kittykai, a calico kitten. Both cats, while pointing to clues, are shown as regular felines. Following that book, there are two short eBooks, Sneaky’s Christmas Mystery, and Sneaky’s Summer Mystery that feature them and allow readers to “see” their thoughts. This change in their characters continues in No Grave Unturned, where Salem is introduced.

New characters and changes in regular characters add depth and interest to a series. After all, variety is the spice of fictional as well as real life. 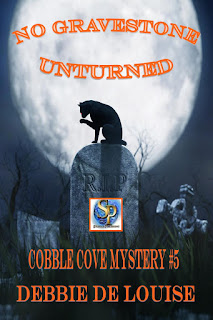 It’s October in Cobble Cove, and Alicia is busy preparing for the library’s Halloween party when she learns that John’s aunt from Florida has died and that John’s cousins and their spouses are coming to town to bury their mother. The day after the funeral, the caretaker’s son is found dead by John’s grandfather’s gravestone, from a blow on the head. The only witness seems to be Sneaky the library cat, who, having left the library, turned up at Alicia’s door with blood and dirt on him.

As Alicia, Gilly, and Sheriff Ramsay investigate, a generation of family secrets is uncovered. Are one of the guests staying at the inn a killer? Will the humans solve the crime, and can Sneaky, Kittykai, and Salem, the inn’s guest cat, team up to help?

Thanks so much for featuring me on Killer Crafts & Crafty Killers.

Love the sounds of this book. Would love to read and review this book and other books in Print format. Book sounds so mysterious and intriguing.

Thanks, Crystal. I'm having a giveaway starting October 25 for a print copy of this book along with 4 other cat fiction books. The information was included on this blog post about my October giveaways: https://wp.me/p6m4z7-2O3. Good luck, and thanks for your interest.

I love your title. No Gravestone Unturned is terrific. Congratulations on the fifth book in your series coming out!

Thanks, Jackie. All the books in my series use the words "stone" or "rocks," but I thought "No Stone Unturned" would be too common a title, so I tweaked it a bit and think it fits well with the story's theme.