Author Sasscer Hill was involved in horse racing as an amateur jockey and racehorse breeder for most of her life. Her mystery-thrillers portray the world of horse racing, and the skullduggery that big money and gambling so often attract. Learn more about Sasscer and her books at her website.

In June of 2015, the incredible happened! St. Martin’s Press showed interest in publishing my manuscript, Flamingo Road. But the sales and marketing department worried that it would be difficult to sell a horse racing mystery.

I found out later that my St. Martin’s editor struggled to secure their permission. In the middle of this, the awesome racehorse American Pharoah was on his way to breaking a drought where no horse had won the Triple Crown in twenty-seven-years.

At home, I was on pins and needles waiting for St. Martin’s to decide. On May 16, American Pharoah raced in the final leg of the Triple Crown. When he blasted down the stretch on the lead, I yelled so loud, the dog and cat fled from the TV room. The horse won, and in tears, I turned to my husband and said, “I’m going to get that deal with St. Martin’s!” The next day American Pharoah’s win appeared on the cover of every newspaper, and on every morning TV show. The day after that St. Martin’s sent me a two-book contract for the Fia McKee series.

I immediately finished writing The Dark Side of Town and sent the manuscript to St. Martin’s. That book was shortlisted for a Claymore Award.

I was thrilled that my lifelong love of horses and my thirty plus years of breeding and training the almost spiritual Thoroughbred racehorse had led me to a publishing contract with one of the “Big Four” publishers, MacMillan who owns St. Martin’s Press.

I wanted to base my third Fia McKee novel at Santa Anita Racecourse where HBO filmed the ill-fated series “Luck.” During HBO’s filming, too many horses died from film crew ignorance and mishandling. The show was canceled. Fia McKee would be hired to protect the horses in a fictional horse racing movie. I have friends in the horseracing industry, and since it’s not what you know, but who you know, in 2016, I flew to Los Angeles and headed North to Santa Anita racetrack. I’d obtained an invitation for lunch and a tour by the track’s Special Operations manager, Pete Siberell.

Astonishingly, my lunch companion turned out to be the point man who dealt with HBO when they were filming “Luck.” Pete told me everything I needed to know to write my novel, but sadly, the first two books in the Fia McKee series were not selling well and St. Martin’s dropped me like a hot potato. In April of 2018, Flamingo Road won the $10,000 Dr. Tony Ryan Award for Best Book in Horse Racing Literature, beating Felix Francis’s Pulse. St. Martin’s Press was unimpressed.

So, I did what authors often do and started a new series. I completed the novel Travels of Quinn, A Quinn O’Neill Mystery, but my agent barely tried to sell it, saying that my poor sales with St. Martin’s made me a nonstarter. I self-published the book, and in July of this year, it was shortlisted for a Silver Falchion Award for Best Mystery of 2020.

Unwilling to give up my Santa Anita novel, I turned it into the fifth book in my Nikki Latrelle series, Shooting Star. It debuted in July and has received great reviews including one from The Midwest Book Review.

I do hope mystery readers will take a gamble, give this novel a test ride, and catch a Shooting Star! 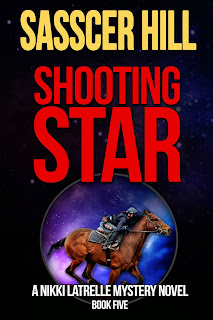 When Nikki’s ex-lover Will hires her to protect the horses used to film a movie at Santa Anita Racetrack, she learns evil is alive and well in Hollywood.

Keeping Thoroughbreds safe from a director who doesn’t know a horse from a hamster is tricky. More difficult are the unresolved feelings between her and Will, especially when sexy, young movie star, Jamie Jackson, sets his sights on Nikki.

But when a sniper’s bullet shatters the brain of a cameraman close enough that she can smell his blood, Nikki’s need to protect the film crew overrides everything. Her sleuthing unearths a trail of corruption and when she must lie to Will to protect his life, she’s on her own. Can she identify the evil behind the scenes before she and Will become the next victims?

Shooting Star is the fifth rocket-paced story in the award-winning Nikki Latrelle mystery series. If you like protagonists with heart and courage, unexpected twists, and a thrill ride to the finish, you’ll love Shooting Star.

Delighted to be featured on Killer Crafts today!

I think I've now read every one of Sasscer's books, and I love them all!

That's pretty awesome Sasscer, seems to me you're first at the finish line

Not only is Sasser Hill a good writer but a very nice person. I had the pleasure of meeting her at a the book signing held every year on Black Eyed Susan Day at Pimlico Race Course.