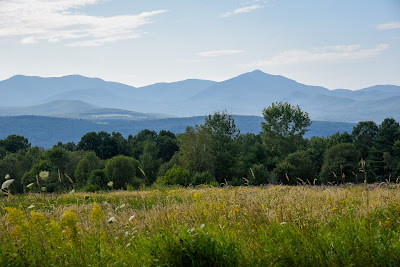 Award-winning author S. Lee Manning is a reformed attorney who now writes full time. Her novels reflect a lifelong interest in espionage and in Russia. Learn more about her and her books at her website.

A number of years ago - I'd prefer not to disclose just how many  - my family went on a vacation in a little town in the Eastern Townships of Quebec, just north of the Vermont border. It was a pleasant vacation, except that the water in the house we'd rented smelled like rotten eggs and the house had been falsely advertised as being on the lake. It wasn't. But we managed to get ourselves to the lake; we practiced our French, and we had a lot of great meals.

A bonus: my husband and I found an intriguing street in the town of Beebe Plains, close to where we were staying. One side of the street is in Vermont, and the other side is in Canada. Driving down the street, I could see US flags and Canadian flags waving at each other from yards on either side. Farther down, in neighboring Stanstead, is a library that straddles the two countries. The entrance is in the United States. The parking lot - Canada. Inside the library, a black line marks the border.

I talked with border agents, and then drove slowly from Beebe Plains to Stanstead, noting where the houses stopped and the fields began.

Border agents told me that neighbors couldn't even cross the street to say hello without checking in at the station. If you drive along the street, you're in Canada, but if you pull into a driveway on the Vermont side - unless it's been cleared, you'll get a visit from a US patrol very quickly.

Previously, goods of various sorts were frequently smuggled across the border, usually cheaper American products like jeans, sometimes drugs, but with 9/11 and increased security, smuggling became less frequent. It still happens - it just takes a little more skill not to get caught.

I write spy thrillers, and I was fascinated - what a perfect location for something nefarious.

Canada is an easy drive from our home in Northern Vermont, where we moved a few years after that vacation. Before the world shut down, my husband and I would visit the Quebec towns near the border every few months. We found small and wonderful restaurants and kind people willing to endure our pathetic attempts at speaking French.

We also revisited the area that I had marked down for a future novel. Eventually, I wrote a description. I just didn't yet have the story to go with it. Of course, the story would have to involve smuggling - but what was being smuggling, who was smuggling it, and why - wasn't clear to me -  yet.

Fast forward: last year, I wrote Nerve Attack, the sequel to my award-winning novel, Trojan Horse. I needed to accomplish several things in this novel. Aside from the usual list of intricate plotting and in-depth characterizations, my protagonist Kolya Petrov, who had resigned at the end of the first novel, had to be enticed back into the spy game. Could I do all the above, and still use that fascinating street in Beebe Plains?

I came up with an idea: What if a smuggler brought something that could kill many innocent people - a poison - into the United States and what if the only person who had the contacts to stop the attack refused to work with anyone but Kolya? I had the perfect person to demand Kolya's return: Dmitri - Kolya's childhood best friend, whom he'd put in prison ten years earlier.

I had the beginning of the plot and the perfect reason to insert Beebe Plains into Nerve Attack.

It took several drafts and eight months, but everything came together, plot, characters, locations. While Beebe Plains only plays a small role in the novel, it sets the tone - and I finally got to use the description I'd written.

Now that the border is finally open again, I can't wait to go back. 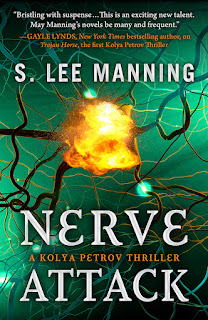 Former U.S. intelligence operative Kolya Petrov, struggling with the physical and psychological aftereffects of kidnapping and torture, is drawn back into the game when Dmitri, his childhood best friend, holds the key to stopping an attack by terrorists armed with a deadly nerve agent. Working with Dmitri, however, is complicated. While their friendship had been forged during their years in an abusive Russian boys' home, the two men's lives took very different paths. Dmitri had headed the North American branch of a Russian gang until Kolya, working undercover, put him in prison. Ten years later, Dmitri's cooperation is essential to finding the smuggler of the nerve agent, and he refuses to work with anyone but Kolya.

Kolya reluctantly agrees to undertake one more mission, but to succeed, he must come to terms with the past. Can he trust Dmitri not to take revenge for the betrayal of their friendship? Can he rely on his own judgment and abilities, despite a leg injury and ongoing PTSD, to survive an elaborate plot that threatens his life and that of his fiancee, as well as the lives of hundreds of innocent people?