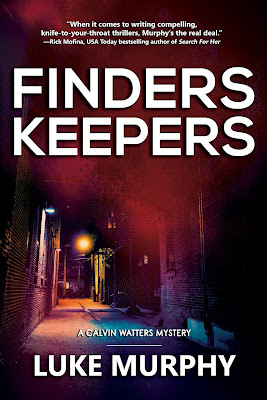 Luke Murphy is the international bestselling author of The Calvin Watters Mysteries and The Charlene Taylor Mysteries. Murphy played six years of professional hockey before retiring in 2006. His sports column, “Overtime” (Pontiac Equity), was nominated for the 2007 Best Sports Page in Quebec, and won the award in 2009. He has also worked as a radio journalist (CHIPFM 101.7). He is also a teacher and lives in Shawville, QC with his wife and three daughters. Learn more about Luke and his books at his website.

A lot of people ask me about where I get my book ideas from, and to be honest, there isn’t one sole place where I retrieve my ideas. I’m constantly listening, speaking with people, observing behavior, and monitoring stories in the news. The majority of my ideas stem from a story I’ve heard or, even though my books are fiction, something that has happened in real life.

I always knew that I wanted to continue the Calvin Watters series. Calvin has become such a fan favorite character since I published the first book of the series, Dead Man’s Hand, in 2012. People seem to have a soft spot for the Vegas leg breaker turned private investigator. So writing a new Calvin Watters novel was priority number one.

Since I started writing crime novels, I have had many personal chats with my family doctor (he is one of my main resources). We are constantly talking about methods of death, and ways in which people can be murdered, without any proof or evidence left behind (I know, creepy, right?). Sometimes my mind even scares my own wife. LOL!

My doctor happened to mention a rare case he’d heard about surrounding a famous American heiress and socialite from the seventies and eighties—Martha Sharp "Sunny" von Bülow. Her second husband, Claus von Bülow, was convicted in 1982 of attempting to murder her by insulin overdose, but the conviction was overturned on appeal. A second trial found him not guilty, after experts opined that there was no insulin injection and that her symptoms were attributable to over-use of prescription drugs.

But it got me thinking.

Once we discussed this case, I started researching the story and it proved to be a very interesting idea. The story was dramatized in the book and movie, Reversal of Fortune. Sunny von Bülow lived almost 28 years in a persistent vegetative state, from December 1980 until her death in a New York City nursing home on December 6, 2008.

This got the wheels turning, and the thinking process kicked in.

I took this idea of insulin injections and ran with it. In my opinion, it was such a remarkable case, that writing about it became a fun fascination. Of course, as a fiction writer, I had the creative freedom to use my imagination and add to the story. But there were endless possibilities here, and I was able to follow through in developing an entertaining book. Or at least, I hope it’s entertaining for readers.

To beat the streets…

Calvin Watters spent three hard years on the Vegas streets, working the depths of the red-light district. When a string of escort murders surfaces and the LVMPD has no answers, they realize that there is only one man they can turn to for help.

…you have to know the streets.

Calvin vowed to never return to his former life, but this new case pulls him back in. As he hits the streets, his honed survival skills kick in, and the PI must call upon his past experience to outwit a worthy opponent.

Caught in the crosshairs.

When Calvin killed Derek Baxter, he added fuel to an ever-growing fire inside Baxter’s longtime sniper partner, Jackson North. Now North is out for revenge, but how far will the hitman go to leave his mark on Calvin’s life?

Thanks for hosting me, Lois. It's always a pleasure being on your blog.

And it's always a pleasure to host you, Luke!