A MASHUP OF REAL-LIFE CRIME AND FICTION 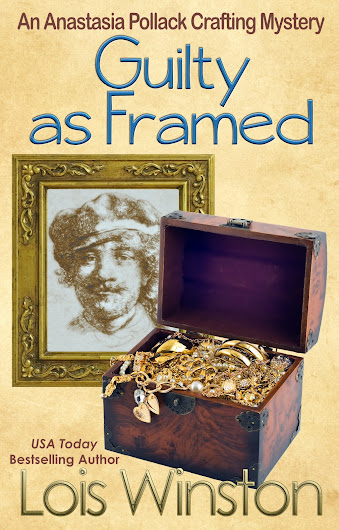 My author Lois Winston has been busy the last few months finding new ways to thrust me into the middle of murder and mayhem. She’s succeeded—as usual—because as a fictional character, I’m at her mercy. The ebook edition of the newest Anastasia Pollack Crafting Mystery, Guilty as Framed, is now up for pre-order at the usual online bookstores. The paperback will be available on September 6th when the book releases.

For this latest book, Lois has veered from being inspired by actual crimes and human-interest stories, to creating a plot that actually revolves around a yet unsolved real-life crime that took place in Boston in 1990. Like most crime junkies, Lois has been fascinated for years with the burglary that took place at the Isabella Stewart Gardner Museum on St. Patrick’s Day of that year. It’s still considered the largest art heist in history. To this day, not only haven’t the perpetrators been caught, but none of the artworks have ever been recovered. Hampering the ongoing investigation is that many of the suspects have since died.

When Lois was mulling ideas for this next book in the series, she decided to focus the plot on the museum heist. But how do you tie a factual thirty-two-year-old crime in Boston into the plot of a contemporary cozy mystery series that takes place in New Jersey?

That’s the beauty of writing fiction rather than true crime. Lois invented some new characters, changed the names of others (to protect the innocent and not-so-innocent), and wove various events from the actual crime into the plot that became Guilty as Framed.

Too bad along the way she couldn’t have also solved the actual mystery of the missing paintings. There’s still a huge outstanding award for information leading to their recovery.

When an elderly man shows up at the home of reluctant amateur sleuth Anastasia Pollack, she’s drawn into the unsolved mystery of the greatest art heist in history.

Boston mob boss Cormac Murphy has recently been released from prison. He doesn’t believe Anastasia’s assertion that the man he’s looking for doesn’t live at her address and attempts to muscle his way into her home. His efforts are thwarted by Anastasia’s fiancé Zack Barnes.

A week later, a stolen SUV containing a dead body appears in Anastasia’s driveway. Anastasia believes Murphy is sending her a message. It’s only the first in a series of alarming incidents, including a mugging, a break-in, another murder, and the discovery of a cache of jewelry and an etching from the largest museum burglary in history.

But will Anastasia solve the mystery behind these shocking events before she falls victim to a couple of desperate thugs who will stop at nothing to get what they want?

Guilty as Framed is currently available for pre-order.

Dear Anastasia: I'm sorry your creator gets you into such trouble! The good news is you thwart her at every turn. She gets you into a mess, you roll your eyes and shake your head and say, okay, let me handle this mess! xoxo

Donnell, you know me so well!

Thanks so much, Jacqueline! Hope you enjoy it.